BritCon is a three day convention for wargame competitions that attracts international participation, with the 2nd and 3rd day also including traders and some demo / participation games. It is organised by BHGS (Brirish Historical Games Society) with supporting help from local club EMHG (East Manchester Historical Games). The venue, the Barnes Wallis building, is a spacious and light venue located just a few hundred yards away from Manchesters Piccadilly rail station (northwest UK).

This post just gives a brief overview of the show and includes some photographs of gamers tables.

As an idle visitor, the show had a different feel to most wargame shows I attend. A lot of the space is given over to the competition players. They have paid to enter the competitions and you do get a sense that the participants are (naturally) serious about their games and at more than a few tables, I felt like a distracting intruder asking whether I could take photographs. In the end, I moved on rather than disturbing them and just concentrated on the part of the building that had the traders, the demo games and the bring and buy.

This is not a criticism, its just that when you arrive as an unknowing non-competitor you instantly think - wow, this is a big show, but it is in fact a show of two halves and probably the case that the competitors need some privacy.

The mix of trade stands was good and everybody seemed to be ticking over. They had quite a bit of space to spread themselves around and had put a lot of effort into getting plenty of stock out on display. Everyone I spoke to was very friendly and enthusiastic and there was definitely a positive vibe.

Below - Donnington figures had a lovely display of their painted figures. This is the front view. 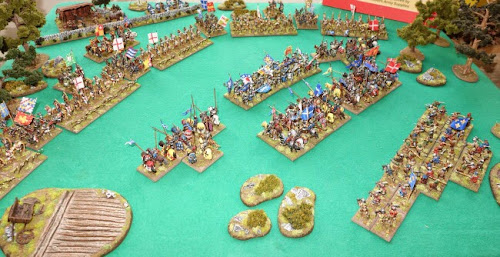 And this is a shot from the rear of that display. I think this sort of thing can really help to 'inspire' a purchase. 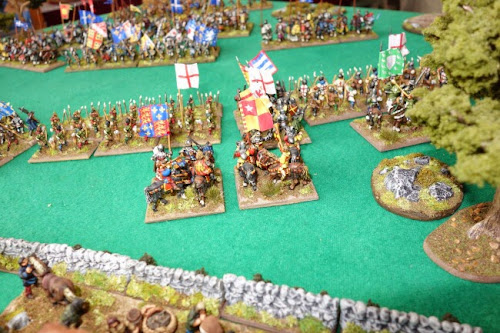 They also had these rather fine chaps, that would look superb on any table. I think all of their stuff is 15mm.

Entry to the show is free (that may surprise some people), all that you are asked for is an e-mail address so that future events can be e-mailed out to you, so win win in that regard. The canteen facilities are good and there is plenty of seating around.

At the moment, my own figure gaming is centred on projects that are based on hexes (from Kallistra - a nice parcel was waiting for me when I got home, ready for my Stalingrad project) and the 10mm scale, so I spent quite a bit of time browsing around the Magister Militum stand. Although I am not ready for any more figures (I still have ACW and napoleonics to paint), I picked up a couple of sample bags of New Kingdom Egyptians (chariots and spearmen), just with an eye to a future dabble in ancients. They are very cleanly cast.

I also got 'Stringbags' from them, a set of WWI air rules, as I want to get a few bi-planes onto the hex board and since I know next to nothing about 'those magnificent men in their flying machines' (I can feel a song coming on), I thought the rules might give me a quick appreciation of the physics of flight.

Magister Militum also stock the GHQ line, including the 'Micro Force' series of rules. I have not seen them before (which surprised me because they are copyrighted to 2006), but they had the Amercian Civil War rule set. I have my own hex based rule set from yonks ago for ACW, but these have 11 scenarios in the back, at a scale that interests me most, so I thought they were worthwhile for that resource alone. I love rule sets that are fully self contained with rules, lists and scenarios all in one volume.

I also picked up a tub of my favourite basing paste from Colonel Bills. It is just called Base Render and is supplied by 4Ground. It is a creamy paste and very easy to work with.

Anyway, on with the show.

Below - Father and son team, Gary and Colin Betts had put on a lovely game based around Pegasus Bridge (a Warlord model I think). They are members of the Mailed Fist wargames club and associated with BHGS. That table just seem to go on forever. I forgot to tell them about my 2' x 3' game board :-) 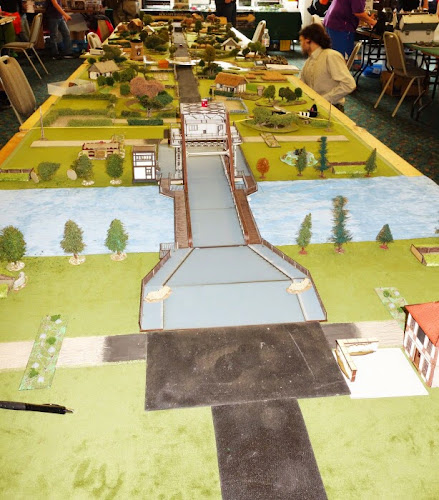 It is just fantastic how some people are prepared to put so much work, effort and cash into a display for the benefit of the rest of us. Just transporting it and setting it up is an admirable thing to do. 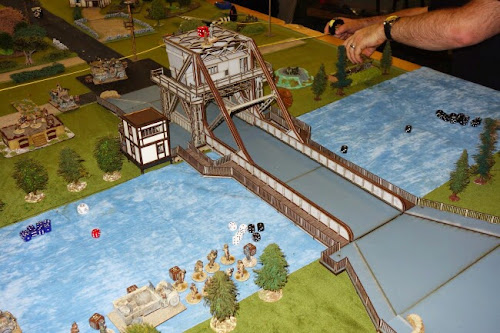 Anyway, nice people, who were very keen to stop and chat and explain a bit about how the project came together. I think it is a Bolt Action game. (EDIT - I have since been told that this was a Bolt Action tournament game and that both Gary and Colin were in the competition, so their willingness to so readily engage with the punters was a nice touch).

Below - This was on a separate table, but also the work of the Betts' team - now this really is a town. It is all done in 28mm MDF laser cut terrain and it looks more impressive on the table than my shots can show. 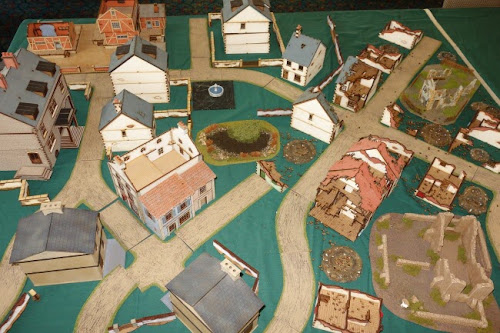 This is an eye level view. All ready for a Bolt Action game.

Below - On an equally big table were another Mailed Fist party of players (again very friendly and good ambassadors for their club), this time putting on a glorious 28mm English Civil War game, covering the battle of Martson Moor. They had demo'd this game at the Phalanx show earlier this year, but this time, they actually had the time to play the whole thing out as a proper wargame - super! This is the flank with a large cavalry action going on.

This is the middle of the board with the massed regiments of foot. 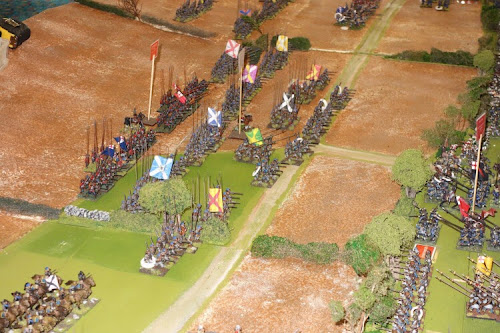 Below - 'Mars Attack' from Mantic Games has not been released yet, but Grim Tree Games were enthusistically doing a demo with a father and son as I walked past. It does look good and can be played in a small space, so that should prove popular. I am looking for a 28mm type game of this size, so probably would have picked up a copy had it been in production. Anyway, it looks good fun. 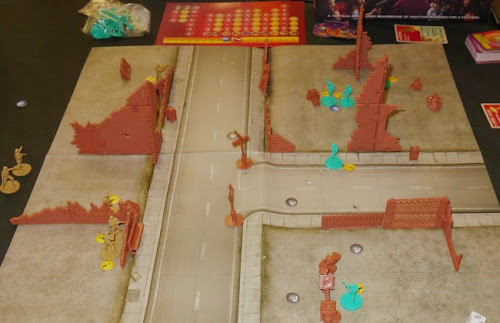 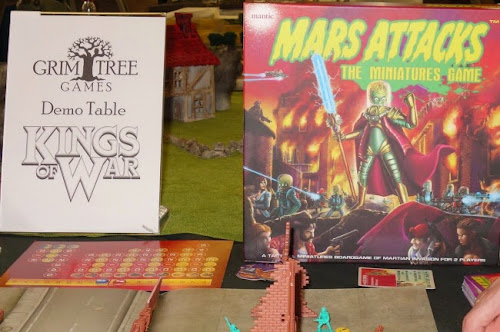 Below - Another game that nicely brings the 28mm scale onto the kitchen table is the SAGA system. This is a shot from one of the game played by somebody in the competition. 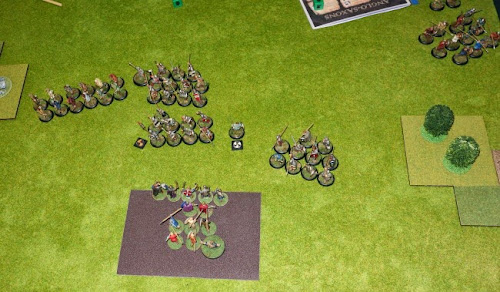 They were quite happy to stop and have a quick chat (thank you). They obvioulsy liked the game and perhaps took me for a likely recruit :-) In this game a small band of warriors are trying to defend their camp.

Below - The Lance and Longbow society were putting on a participation game based on the Battle of Hexham. 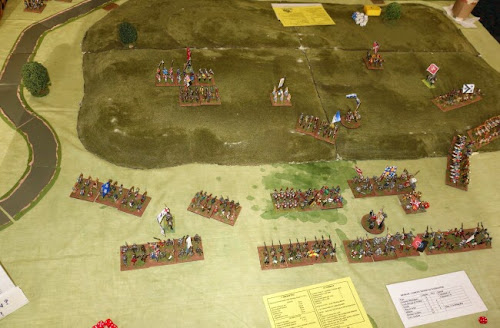 This is a lovely period for colourful figures and flags, especially in this scale. The chap who was playing was particularly pleased that the game could be played just using those two small reference cards in front of where he sat. 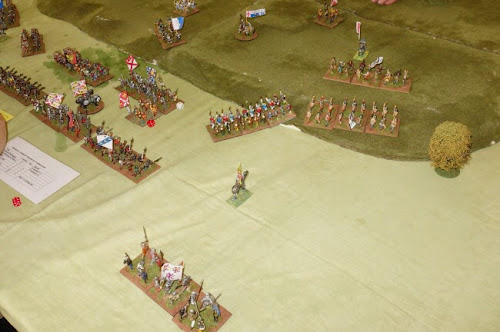 Below - I think this is where my camera really let me down, this game looked much better than my photographs can show. 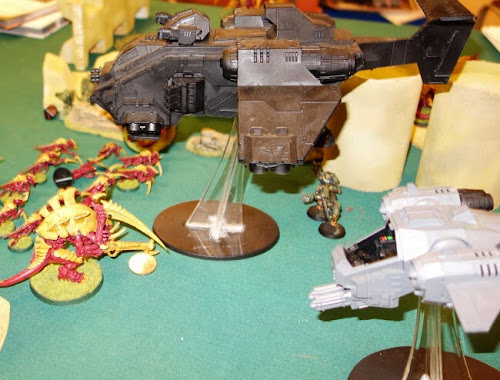 Everything was nicely painted and the aircraft and terrain worked nicely together to give a very atmospheric feel. It was in one of the competition rooms, so I am assuming it was a competative game, but it looked like a really nicely crafted scenario. 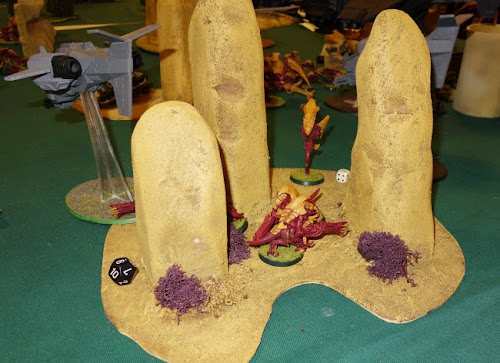 Below - Some cavalry action from one of the competition games. 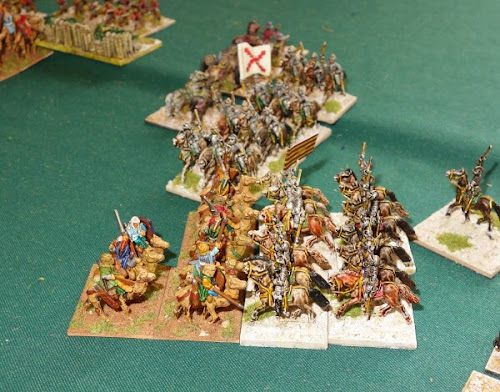 Below - I am not sure who did this, but I am doing a Stalingrad project at the moment, so I took this for a study shot. 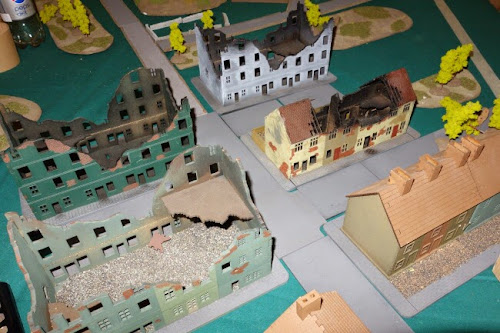 All in all, I had a really enjoyable morning. The organisers had done a good job.

It is nice being a punter, just going around, mooching, a bit of buying, getting ideas and chatting with others. Thank you to all those who worked hard to allow me to do that.

Posted with Blogsy
Posted by Norm at 19:21