Sorry I have not posted for a while, but I have been working pretty much full out on my Stamford Bridge boardgame design (below graphic not from the game), just to tidy things up, with the help of some playtesters and Revolution Games. 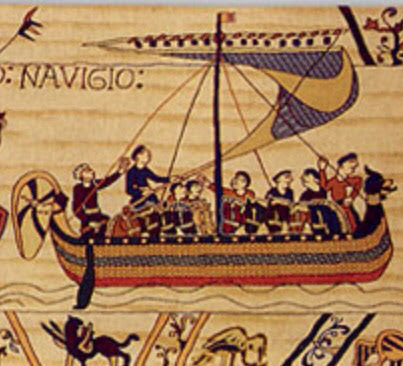 This is the sister game to my Invasion 1066: Hastings game that Revolution Games published last year.

The design has been around for a while in DTP format, but going to a publisher not only gives this DTP'er some 'real' counters, but gives an opportunity for some streamlining and a re-appraisal of some ideas.

Hastings is a tough grind battle for the Normans as they fight their way up Senlac Hill, but here on the open battle flats near York, the situation gets right into a hack and slash affair from the get go, with a surprising level of attrition to both sides as unit flanks quickly get exposed and invite innevitable attack. Considering the same engine drives the two games, they have a very different feel.

Part of the Viking army have left their armour at their camp, so at the start of play, the Viking front line sets up inverted and neither player knows which of those units has its armour (strength 5) and which don't (strength 4). This 'untried units' type of rule crops up in a few boardgame wargame rules and it is one of my favourite game mechanics.

Anyway, the map and graphics for the game are done and we should be seeing this game available before Christmas.

I will replace this post with a full article once the game is available, in the meantime, here are a few resources that might interest;

Description of the hastings system and AAR - LINK - http://battlefieldswarriors.blogspot.co.uk/2014/05/invasion-1066-battle-of-hastings.html

Posted with Blogsy
Posted by Norm at 10:18