Anzio - The Bloodiest Beachhead is a boardgame, designed by my own hand some time ago, looking at the desperate first six weeks of Operation Shingle, the Allied landing on the Anzio beaches, Italy 1944. 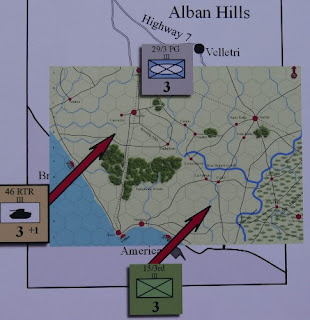 The battle was characterised by an initial sparse German defence, giving the Allies the potential for an immediate advance inland, with the way to Rome open to them. Rather than advance immediately into the unknown, the invaders first consolidated the beachhead, but the Germans, who already had a response plan (Case Richard), fed forces into the area, increasingly solidifying the defences. When the Allies did resume the advance, it was against a determined and strengthened defender, aided by a battlefield that had become a landscape dominated by mud and soft ground.

The following post offers a few observations and discusses why this design ended up being self-published rather than getting the commercial treatment from one of the mainstream game publishers. It then leads onto an older post that looks at the system in detail with the usual AAR that shows the flow of play.


Sorry about the purple / blue shade on the photographs, my white balance on the camera must have been well out.
I put this game together in 2011, putting a lot of effort in both the design and development. It was submitted to a publisher who liked it and the next thing, there was a contract in the post.

However ..... In following correspondence, the publisher pulled back, having identified two issues during play-testing. They said that they were concerned that the Allies could land on Turn - 1 and make immediately off the map to the North and instantly win the game before the Germans could react. I have no idea where they got that notion from as it is clearly impossible.  Indeed as a prime victory condition, this outcome is a rare achievement for the Allies over the total course of the game and instead victory will likely be based on casualties and the occupation of settlements.

Secondly, they were concerned by the disengagement rule. The rule is that anything in an enemy Zone of Control must roll a dice equal to or greater than the enemy combat value if they want to disengage from the enemy. They felt that the game scale having turns equalling 3 - 4 days, that this was unnecessary. They possibly had a point, but it was one of my favourite rules in the system. It brings a lot of nuance and reflected that movement around this small, mud filled and artillery zoned area was at best very difficult. I would have been loathe to lose this rule, but perhaps a developer working with a publisher would have jettisoned it anyway - who knows.

Anyway the straw that broke the camel’s back was that they suggested changing the game to go down to battalion level and increase the scope of the game to bring the ‘Road to Rome’ and that southern front into the map - in other words a total re-design and a different game!

So that was the end of that and instead, I initially self published as a Desk Top Published design using an A3 colour printer and selling the game direct and then later submitted the files to wargamedownloads dot com, where it still lives as an available download, but of course the disadvantage is that gamers have to paste up and mount / cut their own counters etc.

It was all rather a shame really, especially as in my humble opinion this had been brought to a more-or-less a ready to go design. 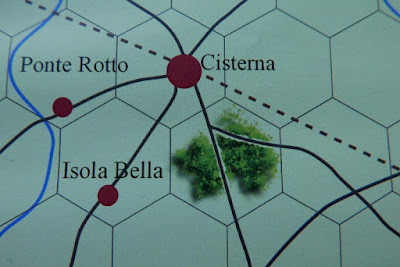 During my latest clear-out, I came across the game in my ‘design box’ and thought it was worth getting onto the table and just getting familiar with it again. I had intended to do a follow up game for the east front because I quite liked the way that a side with a big artillery advantage was represented and built into the sequence of play.

I played the game face-to-face with Mike last night and from a play point of view, it was probably one of the tightest sessions we have had with this game. We both had good attacking opportunities and stalemates at various locations and frequently all at the same time.

To the east, the Allies surprised the Germans by making an early advance into the Pontine Marshes, denying the Germans a reinforcement route and springboard to launch attacks into the Allied soft flank and rear. For the most part the Allies managed to hold their positions on the German side of the Mussolini Canal, though failed to bring the important hub of Cisterna under any pressure.

To the North, the Allies maintained a constant pressure on Aprilia, eventually capturing it, successfully defending it against one counter-attack and then losing it to another. They eventually retook it, but the resulting battles had brought heavy losses to important German formations. From this base they pressed on towards Campoleone — a critical victory location and major reinforcement hub for the Germans. While they did not capture it, they significantly contained the Germans in this sector and on the left flank managed to cut off three German hexes with several formations from their supply, seriously impacting on German capability and losses.

Neither side got their sudden death victory locations (the Germans were not even close) and so it went to casualties and occupied settlements, giving the Allies a clear victory, nicely reflecting their better game.

The various mechanics of the game, together with the topography, bring a ton of nuance on a hex by hex basis, each hex can really matter and the control of some become pivotal to the immediate sector. 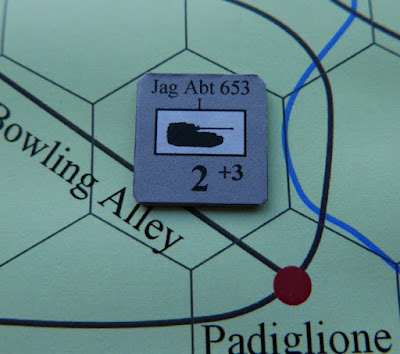 The system has some interesting aspects such as combat being fought one hex against one hex, rather than typical ‘counter gang - ups’ from multi-hex attacks and units have a bonus rating for use against armour, so for example the powerful Elephant Tank destroyer unit has a relatively low combat value against just infantry, but a very desirable bonus against armoured formations, so that it performs to role. As stated above, units must test to disengage from an adjacent enemy and armour must always test for bog (the mud) in every hex that they want to move into that isn’t made using road movement. So the player on a turn-by-turn basis does not have everything under their control. Add to that a Random Events Table and the result is that both players are intimately engaged with the map and units throughout the game, looking for the smallest opportunity to make gains.

It sounds like I am over-enthusing over my own handy work here and perhaps I am, but I did an overview of the system together with an AAR in a 2015 blog post and the reader may want to check that out to explore this game further, with combat examples and the wider impact of various game mechanics explained (Link Below - including a direct link to where the game files are hosted).

As always, thanks for looking.

Email ThisBlogThis!Share to TwitterShare to FacebookShare to Pinterest
Labels: Anzio