Recently, Aaron at his blog ‘Here’s No Great Matter’ (Link in the resource section below) did something of a reflective post. I added a comment, which mentioned a napoleonic wargame book that my father had bought me many moons ago and some weeks on, I now find myself in my own reflective mood.

Happily, it’s not a later-life crisis. I know this because I don’t have the remotest urge to do anything about that Harley Davidson motor bike that I may have noticed, winking at me from a show room window :-)

I have however, motivated by my comment left on Aaron’s post, just managed to obtain a ‘very good copy’ of that book my father bought me all those years ago. That was 1974 and being pre-internet and at the start of my exposure to wargames, had me hanging onto every sentence by precious sentence and it became an important companion to a young enquiring mind who was having all the right buttons pressed for a life-long passion for wargames.

Like everyone else I knew as a teenager, my parents worked hard and there was little money around other than to pay the bills and put food on table. There wasn’t really an expectation of getting anything above that. That was what Christmas and Birthdays were for, if you were lucky and which, in any case, usually stretched parents to ‘going on the weekly’ to spread the cost over the rest of the year.

Anyway, out of the blue, my father took me to my newly discovered ‘proper’ wargame shop on the other side of the city and while there, I handled the Grant book about 1000 times like an eager teenager would and he asked me if I wanted it. Why ‘yes’ I said without reservation and he bought the book (£3). I have no idea how that was paid for, probably out of his petrol allowance - still, I had my book and it was wonderful.

Somewhere along the way, I lost possession of the book, so getting another copy has just been one of those good things to do.  Anyway, here I sit, I have my book again and I am reading through it with 2018 eyes. Is it as wonderful as I remembered? Well that is for a later post, but I am immediately stuck by how the decades, no doubt through growing affluence,  have changed the expectations and judgement of myself and peers. Comparisons might be drawn from other Napoleonic rules recently acquired, such as Neil Thomas’ fast play titles, Colours & Guns by Iain Dickie and Gareth Harding, Warlord’s Black Powder and of course supplements and Dave Brown’s General d’Armee.

Some of this contemplation, which I certainly think links into wargame presentation, also comes from and coincides with my newly acquired interest in ‘getting back into vinyl’. I fancied a dabble and bought one of those cheapish decks and some speakers that I thought were okay, plus some nicely pressed new 180gm vinyl and my excitement levels were definitely on the way up. The plan was just to sit and listen to an LP from start to finish without interruption of skipping forwards etc and enjoy some chill time, something of its own nostalgic pleasure trip.

Then, with my interest piqued, I started to read internet stuff and I quickly ‘realised’ that I had bought the wrong kit. What I really ‘needed’ was a deck that reduced impact on the record, that had a better needle that sat properly in the groove and that had an anti-skate device to stop wear on one side of the groove or slipping out of the groove and that the tonearm had an adjustable counter-weight that would avoid undue pressure to bear down on the record.

Of course with my newly acquired ‘expert’ knowledge, I knew the speakers were wrong! and I also 'needed' a decent amp with a built in pre-amp so that the deck thingy and the speaker thingy would perform at their best.


And did you know that the speakers need some time to ‘bed in’? so that the skin on the speakers gets to relax a bit with a few days use. You just don’t know what you don’t know and then when you do, is there any going back?

Is there a discernible difference with the kit I had a few weeks ago? Well yes actually, significantly so, even for my unsophisticated ear. Decades ago, did I know that the family Fidelity record player and then the budget music centre wasn’t actually the dog’s nuts! Well, no, not at all, I had no idea. Did it particularly matter? Well no again, I loved those records and the music for what they were. I played them without any pretentiousness, without worry whether the base may be slightly out or that speakers weren’t tweeting or woofing or whatever the ‘essential’ bits should do.

And so back to wargames. Is there a tension between our memory of ‘the good old days’ and how we wargame today?  Perhaps there is an old school tendency to look at the past with a rightful affection that also translates into a misplaced view that wargaming (and playing music) was better then than it is now.

It may be true that those days have a nostalgic magic that partly comes from the energy and excitement of youth, journeys of exploration and an absence of cynicism. Is it also possible that what we have really lost in our ‘worldly progress’ is a degree of naivety, which used to leave room for simple pleasures to abound.

So perhaps that is where the tension between before and now lays. Yes, yesteryear was wonderful if you were riding that wave of the explosion of the hobby, but on the other hand, the current day wargamer can immerse themselves in a richer wargaming environment, thanks to the commercial side of the hobby being strong enough to develop a diverse range of high quality products that can meet the tastes of most individuals. Whatever your interests, there is generally something to serve them.

To example some of this wonderful excess, a problem for me today (fancy calling it a problem!), as a fan of WWII tactical wargames, is that I have three very good series of boardgame on the subject (18 separate game modules), two figure rule systems and my own figure rules. All these vie for the same piece of wargaming time and that small piece of brain that can remember rule systems thoroughly enough to play with pleasure. Dare I mention napoleonics, dark ages, American civil war etc.

If I were to start a project with the Grant rules, then where to start? In 1974, it was easy. For the teenager it was Airfix 1/76 plastic. For those who had ten years on me, they might also be looking at metal Minifigs or Hinchcliffe 25mm’s or even those new fangled 15mm.

But choosing today, I can have soft plastic, hard plastic or metal, 2mm 3mm, 6mm, 10-12mm, 15-18mm, 1/72 - 20mm, classic 25mm or 28mm (yes and even bigger). Figure conversion is hardly necessary, because so much variety is available in each scale. Then I can choose an open table or a hexed table. My own interests would draw me towards 10mm on hexes, but perhaps a nostalgia project deserves 1/72 plastic. If I chose the 1/72, I would find that some of the figures are now in a harder plastic, and that glues and primers have been developed to cope with the softer plastics - all improvements and with a wider range of sculpts from the likes of HaT and Zvezda.


I can’t say whether it is more expensive now than then to get going on a napoleonic project, but my Grant book was £3 in 1974, which I rather fancy was comparatively more expensive than today’s books - I don’t really know in truth. My first teenage Saturday job gave me £2 a day, a month later I was at a major store getting £6 a day, so roughly 85 pence an hour with a unpaid lunch break. Today the UK national minimum wage is set at £4.05 an hour (£28.35 a day) for under eighteens (£7.50 for over 25’s).

Even if you say ‘Bah Humbug’ to the price of high quality modern rule books, it is hard to compare them to what went before, with their good quality paper, lavish colour illustrations and generally high page count. Of course, now the ordinary man in the street also has ready publishing capability. Just type up your rules or blog post and share over the internet and be as retro or forward thinking as you desire. The fact that one can sit here and browse this blog and similar content across the internet for a couple of hours every day, is a world apart from having your only information feed as being the old (but wonderful) wargamers Newsletter circulated by Don Featherstone - as inspirational and special as that was.

Having said all of that, I am looking at the simplicity of these Charles Grant napoleonic rules and I am nostalgically drawn (back) to them, though I look at some mechanics and there are now easier ways to do some things. So for example in the Grant rules, when a line wants to form square, the flank companies are given additional movement to allow the formation to be properly formed (yes you have to measure the flank company movement separately). I turn to most modern rules and if a formation is able to go into square, the bases are simply lifted and put into square. 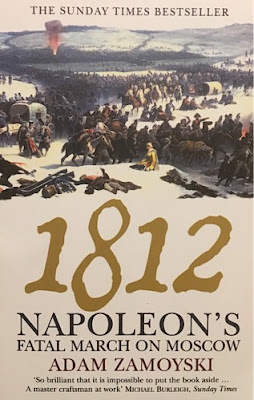 I have just bought 1812 Napoleons Fatal March on Moscow by Adam Zamoyski and published by William Collins, and perhaps by the end of that read it will confirm my interest in building a napoleonic Russian army and maybe a Grant project will go live.

And so here we are! The memories of old music and old wargames are to be cherished. The nostalgia is strong, but almost at every level, what we have today is simply superb when it can be afforded. We may have lost our naivety along the way and whether real or imagined, that loss may be what draws us back to ‘good old times’, but we are where we are and while wargaming is generally considered niche, in truth there are now many niches within that niche and each is serviced by good product. We are indeed a fortunate hobby and whether boardgaming or figure gaming, we mostly get to play what we want.

Normal service of ‘real’ wargame content will resume shortly. I can’t hang around, there is a Harley Davidson in a certain shop window that needs stroking and admiring ....... dream on Smithy :-)