Many moons ago, or 1985 if you prefer, the 500th anniversary of the Battle of Bosworth was re-enacted at the ‘official’ battle site (UK). They in fact do this every year, but obviously that year was a biggie, they pushed the boat out for it and splendid it was too. 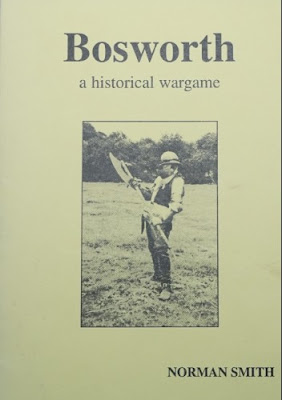 Above - I have always been quite captivated by the battle and so following a return to the battlefield for the August 1994 re-enactment, I set about writing a small booklet on the battle, opening with a description of the battle and closing with some wargame rules and the Bosworth Scenario.

For most of us, this was bordering the pre home computer / internet age and so this booklet was put together using an electric typewriter. A friend at work, who was one of those rare creatures with a home computer and extra kit, scanned a couple of photographs that I had taken at the event to include in the publication, which was all then printed at a local printers and I suppose was a little reminiscent of those old wargame rule sets that we used to buy, which were likewise typed and presented in pastel coloured covers and then stapled (hello Wargames Research Group, Table Top Games and all such good and similar things!). 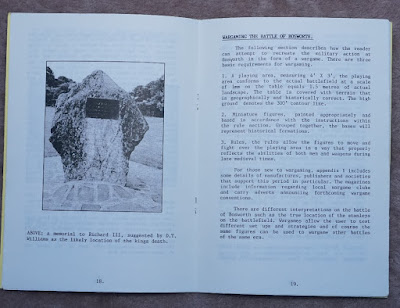 The exampled game in the booklet was pretty poor really and not particularly well presented. I had used a 4’ x 3’ insulating polystyrene sheet for the battlefield, which was badly painted and then ‘dressed’ with some very small 10mm armies to represent the action. Poor photography (I would not get my first digital camera, a Nikon Coolpix 2100 until 2003) and scanning resulted in low resolution and with everything in black and white, the figures in the pictures were difficult to discern, though perhaps that saved me from closer scrutiny.

Anyway, it was a thing very much of its day in terms of quality, it would not pass muster at all, even just a few years later, but happily for me, the Bosworth Battlefield Centre agreed to sell the booklet.

If nothing else, it has its place as a reminder of the explosion in quality and accessibility that publishing was about to offer up to the ordinary man in the street, once home computers became common place, just a few years later, something we perhaps now take for granted, even just our blogging capability is an amazing step forward.

A recent clear-out at home unearthed the booklet and probably for no other reason than a nostalgic fancy to bringing the world of that booklet back to life, it has left me wanting to start a small and focused Wars of the Roses project, again fitting a 4’ x 3’ space and using everything from the booklet as a template to get the game onto the table.

I can use the text that describes the battle and the rules can be tweaked, though I would like them to remain true to the initial design intent and of course the photography can be a much more fun and prettier thing to work with these days, as can the models.

The scale will need to change or dare I say, even being dispensed with, so that it just looks right, as I was using 30mm wide bases with a ground scale of 1.5 metres to the millimetre, so some wizardry will be needed here. 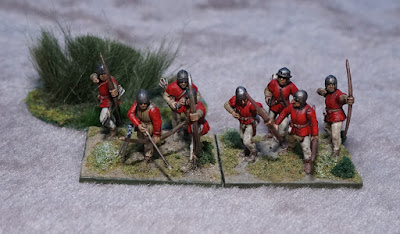 Above - a few years ago, I had a dabble at doing a couple of Perry 28mm plastics bases, these are each based to 50mm frontages, though I think if doing this again, I would base to either 80mm frontages or 100mm.

Taken together, a ‘from scratch’ nostalgia project should at least provide some interesting posts here and be small enough in scope that others can have a go with existing armies or even be tempted to have a crack themselves at building up two small forces.

Since this joins the list of ‘projects and generally brilliant ideas’, nothing may even get beyond this post! Though just the reminiscing and contemplation of all of this feels like it will be enough to fuel at least ‘stage 1’, which will no doubt involve the Perry catalogue :-).

I did visit the battlefield again a few weeks ago. It was pouring down, one of those moments when the weather people decide to give a storm a name! so not much walking got done, but the visit, inspired by finding the booklet, has been an interesting bit of wargaming related distraction.

The below photo was taken at the Battle Centre Museum, a fine chap no doubt and I am hoping that between this sort of simple clothing and some soldiers wearing full armour, that parts of the army may allow a fast paint job to keep momentum going. 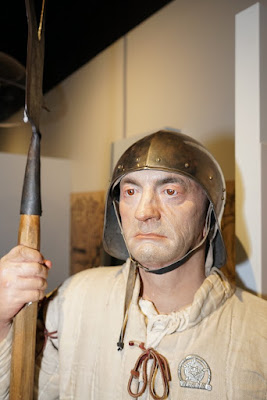 COMMANDERS is my sister web space that offers more frequent snippet based updates than here on various projects and gaming activity. LINK
http://commanders.simdif.com