I have spent the week going over my ACW rules Two Flags - One Nation, that are intended for using figures on hexed terrain. The idea being just to a bit of a tidy up in readiness for our next face-to-face game. 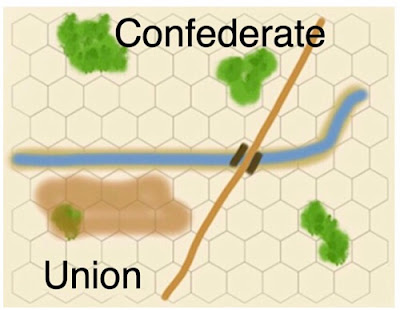 As well as the usual tidying up of text to better express some points, I settled on a few minor rule tweaks, so it seemed a good idea to set up the Mill Creek introductory scenario from the rule book, which is useful as a benchmark scenario for testing rule changes.

The rest of this post discusses the (quite) minor changes and shows some highlights of the game.

The rules are freely available from my DropBox account (thank you DropBox) via the Resource Section at the foot of this post and this most recent update is described in the opening paragraph of the rules as  ‘Edit January 2019’.

Tests following casualties from artillery fire - Page 15. When units suffer casualties from enemy fire, they take a Capability Test, which if failed, forces the unit to retreat 1 hex and become disordered. A modifier of -1 has now been added to the Capability Test when the casualties result from artillery fire. This is to simply reflect that an attack from guns may have a greater mental and physical effect on a unit above that of ordinary musket fire.

Increase to the value of supports - Page 12. The system does not allow ganging up of units when attacking. Units attack one-on-one. However a regiment can claim support from another regiment that is to its immediate rear, if that second regiment is unengaged and part of the same brigade. The supporting regiment has always provided a +1 modifier to the attack. This has now changed to a +2 modifier. This better reflects the value of having support of another regiment and encourages / rewards brigades that deploy in depth when assaulting.

Disorder after Close Combat - Page 13. Following Close Combat, units from both sides are always marked disordered. This has now been extended to also include a regiment that supported the attack as a ‘support’.

Disorder - page 5. A clarification was needed because there was a conflict within the rules as two separate sections contradicted each other. It is the case that a Disordered unit can support another regiment’s attack and if Disordered, it will not invoke the Disorder Close Combat penalty on those occasions when the prime attacking regiment is in good order.

Other areas of the rules have simply had some minor improvement to text for the sake of clarity, but nothing that changes a rule principle etc. Players who have already printed off a copy of the rules who want to just update the rule changes outlined above can just print off the above pages and insert them into their rules, plus pages 31, 32 and 33, which are the amended Quick Reference Sheets.

The changes are relatively gentle and more akin to fine tuning than anything else.

‘Action at Mill Creek’ is the introductory scenario from the rulebook (the other scenario covers the initial moves against Willoughby Run at Gettysburg). Neither the forces or the battlefield are complicated or large. Confederate forces are 8 infantry regiments and 1 artillery battery and Union strengths are 7 infantry regiments and 1 artillery battery.

The Union are holding the high ground and a bridge over the crossable creek with two weak brigades. A third brigade is en-route to strengthen the position. A Confederate division of three brigades is attacking with the objectives of capturing both the bridge crossing and some of the high ground. Can they achieve this before that enemy reinforcing brigade arrives to spoil their day! 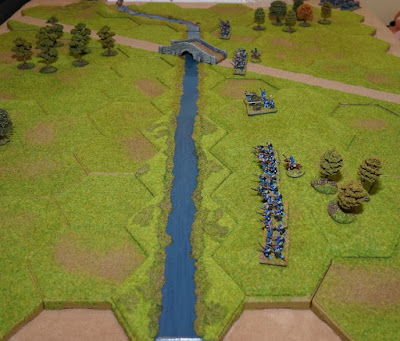 The Confederates rolled particularly well and so both sides ended up with just one unit each armed with smoothbore muskets. None of the leaders gained any notable characteristics.

The Union deployed first with one brigade on the high ground together with the 12 pounders of the 1st Ohio Battery and the other brigade defending the crossing and further along the creek below the bridge.

The Confederates came into view, advancing boldly in march column and were tightly packed on their left flank, with the right flank, in front of the high ground apparently not covered!

This made the Union player believe that Elzey intended to force the creek at and below the bridge and then sweep around to take the high ground from the side, rather than putting in a direct frontal assault against the hill, which being immediately behind the creek was a strong defensive position. Porters 1st Brigade on the Hill started to adjust his defences to cover the right flank of the hill. 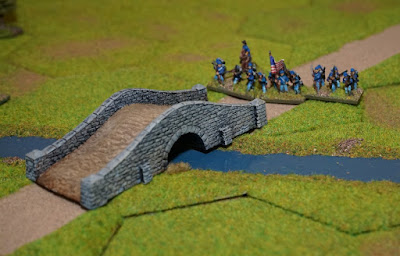 Above, 7th Indiana, looking rather alone, defend the far side if the bridge.

In the opening moments of the game, that element of chaos struck as the Random Event Table produced a result of ‘Confused Orders’ and allowed the Confederate player to move one enemy unit in any direction. To Union cost, they saw their artillery limber up and retire onto the reverse side of the hill. This was a key element of their defence and one that could have put significant harm on the Confederate march columns. The guns would now have to waste precious time getting back into firing positions.

The first half of the game saw, Confederate 13th Virginia charge across the bridge, pushing Richardson’s 7th Indiana back, but they were then forced to retire back onto the bridge by heavy small arms fire and there they stayed, suffering much and hanging on grimly until they eventual broke under the pressure of casualties.

Holmes had taken his 3rd Brigade to demonstrate in front of the high ground forcing Porter to now redeploy back along the front / left side of the hill. Kershaw’s 1st Brigade on the Confederate left, crossed Mill Creek below the bridge, forcing the Union right to pull back towards the road to prevent being enveloped.

Confederate Courtney’s 12 pounder battery was neglected by both Kershaw and the Divisional Commander, Brigadier General Elzey, spending much of the battle limbered up, much to the relief of the Union, who were coming under pressure as they took casualties and the promised third brigade failed to show. 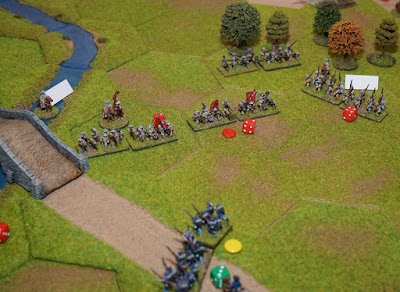 Above - The Confederates start to envelope. the Union right flank.

In the second part of the game, the first elements of Keyes’ Brigade started to arrive along the road, but the way ahead was block by retreating and fragile Union regiments. Further, as Confederate forces approached this road, Keyes ability to manoeuvre was further closed down and subject to grizzly close range fire. 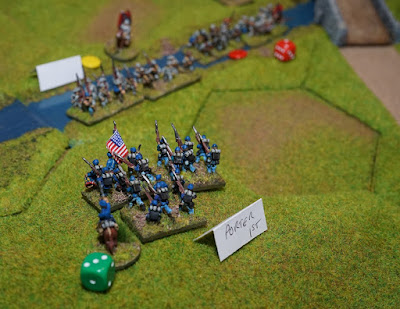 Above, 14th Indiana from Porter's 1st Brigade are on high ground, looking down at the Confederate regiments in the creek that are preparing to charge. The red counter means Disorder and the yellow counter shows smoothbore weapons.

The final moments of the game - The Confederate held both ends of the bridge and so the crucial fight rested on Elzey’s men getting some control of the high ground. In a series of shoves and pushes, the Confederates would first get two regiments onto the hill and then one would be pushed back, this was repeated twice.

Union casualties were mounting quickly. 8th Ohio routed, followed by 7th Indiana and it was only the late arrival of Keyes’ 13th Illinois, who ran up the rear of the hill, ejecting 25th Virginia that saved the moment.

The scenario ended on turn 9 and combat had gone down to the last dice roll, which I took as a good sign of scenario balance. As well as controlling the bridge, the Confederates needed to have two regiments on the hill, failing to do that gives an automatic Union Victory ..... but I would be happy to call this a draw / stand-off, as the Union forces were not in good shape and more time may have seen a Confederate victory.

The system appears to be working well and to design intention, with units that become engaged becoming increasingly ‘worn’, while fresh reserves thrown into action can bring vigour to their sector. The scenario is small enough to be played at a small kitchen / dining table and we rattled through it in around two and a half hours.

There is quite a lot of dice rolling due to Capability Tests being central to the design, but as unit become worn, these can start to critically matter and bring nuances to the game. In the opening of the scenario, when the Union artillery was moved by the Random Event, in its turn the limbered up battery returned to the line, but then had to take a Capability Test to unlimber, which it failed and so those guns would take another turn to come into play and it is those sort of mini moments that collectively add up to make scenarios re-playable and bring interest to the game, so for better or worse (depending on your view of die rolling), the very common Capability Tests stay in!

The rules remain as a free download (for personal use only and all copyright retained by me, as I or another may choose to do something commercial with them in the future) at the below link. If you do find the rules useful, please consider making a donation to your favoured charity or drop some coins in one of those charity boxes that most retailers keep by the till - thanks.

Finally, a photo for Iain, 28mm in the process of charging across a similar bridge over a similar creek! :-) 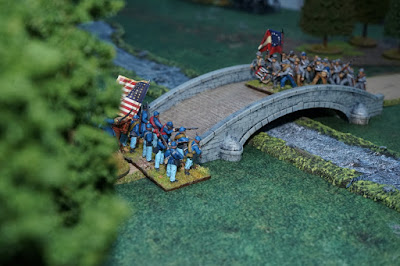 Commanders is my other bit of webspace that is a bit more snippet based than here and can be an indicator of what will appear here as a fuller article. LINK

The rules are available here, you may get a pop up window inviting you to sign up to DropBox, you can just click past that if you don’t want a DropBox account.