Monday 14th October will see the anniversary of one of the main battles that brought about a real dynastic / political directional change to this nation, good enough reason to get it up on the table. 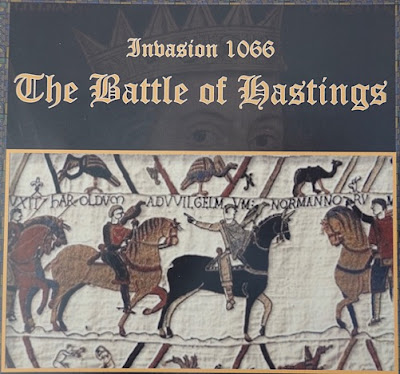 This is ‘Invasion 1066 The Battle of Hastings’, a small footprint boardgame from Revolution Games and one of my own designs.

This post just picks up a few highlights from this anniversary playing of the game and includes a couple of shots of my (slowly) growing 1066 12mm Kallistra armies.

At the foot of this post is the Resource Section that has various links to previous articles that explain the mechanics of this game and that look at the sister game covering Stamford Bridge. So this post is just going to limit itself to some gaming highlights of the most recent playing of the Hastings game.

We will take the historical scenario, which starts on turn 3 and has the armies arrayed in their historical positions, that is, on the hill for the Anglo-Saxon force under King Harold II and on the lower ground for the Norman / Breton / Franco-Flemish force led by William Duke of Normandy.

Victory largely comes from destroying the enemy army, with some bonus VP’s for reaching the enemy rear and also for controlling The Papal Banner. The Anglo-Saxon army should make best efforts to stay in a defensive position on the higher ground, the Norman army needs to break into that position. Historically this was a tough grinding battle for the Normans, lasting around eight hours, rather than the typical short two hour battles of the period.

The system typically has the cohesion of sides slowly breaking down, with individual routs here and there and then the tipping point will come when one side, or even both will start to collapse with increasing numbers fleeing to the rear. 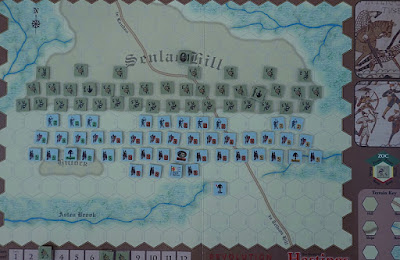 Above, the opening positions as the archers ready themselves to disorder the defence. 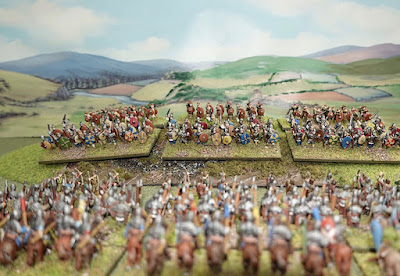 Above, Kallistra 12mm figures, with basing as 80mm frontages except for the archers which are on a 40mm frontage. 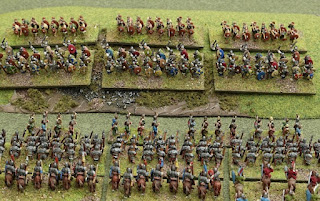 Above, the archers are on a smaller base because in my game, they open the battle and then get ‘burned off’, leaving the table, as they go ‘out of arrows’.

Opening turns.
The game opens with the Norman archers trying to disorder the defence. The front Anglo-Saxon line comprises of the armoured Housecarl, so the archers need to roll a ‘6’ to disorder, while rolling a ‘1’ or ‘2’ will put them out of arrows and see them removed from play. 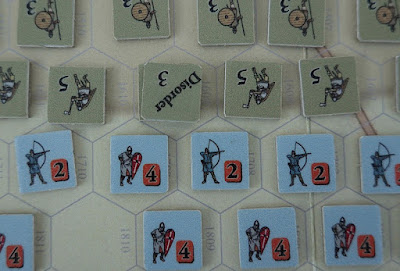 Above - This is the first disorder caused by the archers. The strength 5 Housecarl drops to a vulnerable strength 3. Norman infantry will move up to attack and become disordered themselves. Then the disordered Housecarl pull out of the line to re-order and are replaced by a unit of the general Fyrd from the second rank.

The cavalry are released!
The archers have thinned after most of their troops have gone ‘out of arrows’. In the front line, the Anglo-Saxons have three disordered units and two General Fyrd units, these are vulnerable points, only defending with a value of 3. The Cavalry on the left (Bretons) and on the right (Franco-Flemish) advance to attack the enemy flanks. Their respective leaders take the risky decision to lead from the front.

As the attacks go in, Harold’s troops release a barrage of hand thrown missiles, but these do not impede the attack. There are breaches of Harold's line on both flanks and in the centre, where two Housecarl units are lost. 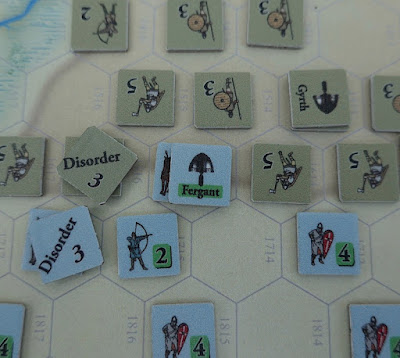 Above - Fergant on the left flank, launches a successful attack, but is somewhat pinned in place.

Penetrations at the hill are reinforced!
Four Housecarl units have been lost, which is quite a high number for this stage in the game. The Anglo-Saxons put a strong counter-attack into the centre, defeating the penetration, but the Housecarls, as they broke into the flanks of the cavalry have left their own flanks exposed. 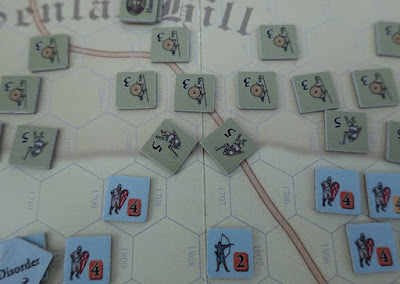 Above - This is a potentially serious moment for Harold’s centre, the Housecarls have exposed flanks and the General Fyrd will need to feed in to fill the gaps.

Despite their gains on the right, Eustace is forced to disengage and pull back of the hill to re-organise his disordered troops.

In the centre, a Norman cavalry unit tries to feign a charge and retreat against the Anglo-Saxon line, in the hope that when they feign retreat, it will draw Housecarls down from the protection of the slopes. It all goes wrong and the feign retreat turns into an actual rout. It is only the presence of Bishop Odo in the Norman rear that persuades the cavalry to stop fleeing.

William had been considering calling a pause in the battle (a Lull) to re-organise his army and bring back re-supplied archers, but his commanders were working hard to get the soldiers momentum going again and mostly succeeding, so he delayed that decision. Plus seeing that around a third of Harold’s front line was now composed of General Fyrd, now was a time to strike!

The General Fyrd start to rout!
Losses had fallen heavily on the Fyrd and no doubt seeing the harsh treatment that the Housecarls were taking, put them on edge and their troops started to rout in increasing numbers. Harold was aware that both the Bretons and Franco-Flemish had also suffered heavily and that they were close to breaking. He decided to take decisive action and counter-attack on both flanks, with his brothers Leofwine and Gyrth leading those assaults. 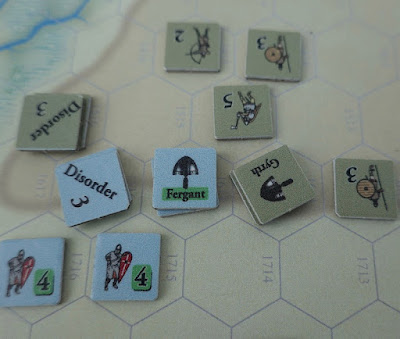 Above - Gyrth attacked Fergant in the flank, successfully destroying the Breton cavalry, but he died in the attack. It was a testing moment for the Anglo-Saxons, their flank could have collapsed, but the Housecarl held firm.

Run away Eustace!
Well a tactical withdrawal really. A stalemate had resulted on the Franco-Flemish flank and for a second time, Eustace retired from the gains made on the slopes to re-organise his force.

Everything was in the balance, both sides were becoming exhausted, with all of their troops reaching their various break points. Each side felt that ‘just a little longer’ would bring them their victory, but how long could they hold out.

The Norman’s use the Papal Banner.
William ordered his cavalry to assault the centre, taking the Papal Banner for encouragement. The attack significantly opened the centre and Harold was forced to use his dwindling reserves to hold the line. Sensing that the time was close when he would have to intervene directly with his own bodyguard, Harold ordered another general counter-attack to push the Norman forces back down the hill. He had limited success on his right, routing some of Fergant’s troops, but it was not enough to change his dire situation. 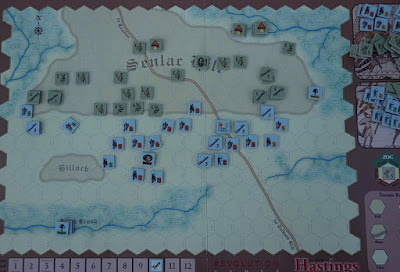 Above - Harold’s position has mostly lost its cohesion. Units are routing to the rear and his flanks are largely disordered. Hovever, the Normans need to re-organise their forces to get up onto the centre right part of the ridge and Harold is relying on that delay to get time to further unnerve the attackers. He manages to get some troops onto the low ground to actively engage isolated Norman units, but he doesn’t quite pull it off and those units are quickly ‘mopped up’.

A final act of defiance!
The Norman cavalry carrying the Papal Banner had taken an enemy defeat for granted and was pushing too far forwards. Harold saw the opportunity and he moved with his Housecarl bodycard to attack the cavalry. Destroying the cavalry, capturing the banner and causing nearby Norman foot and Franco-Flemish cavalry to rout, did give a glimmer of hope of rescuing the situation, but in truth his army was spent and this final act was a curtain closer on his own ability to further influence the course of battle. 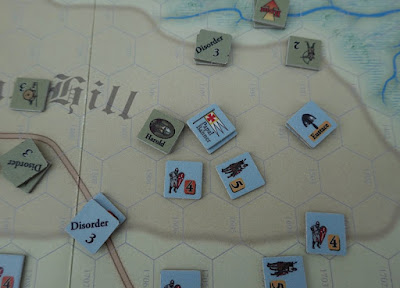 Above - Harold attacks into the position of the cavalry entrusted with the Papal Banner, capturing it, while destroying the cavalry and seeing the other two units off!

Both armies had pretty much fought each other to a standstill. Harold still held two thirds of the hill, but only with a shadow of an army and the balance of factors were probably favouring the Normans. Perhaps time for Harold to retire from the field.

Victory!
Victory points were counted, neither side had broken through far enough to get geographical points, everything was based on casualty points, plus a bonus 5 points to the Anglo-Saxons for holding the captured Papal Banner.

All in, the point difference was 68 v 53 in favour of the Normans. If the Normans get 10 VP’s more than the Anglo-Saxons, then it becomes a Decisive Norman Victory - which is probably both fairly close and fair.

Conclusion.
A very enjoyable game (even if I say so myself!). Despite the tough grind for the Normans to break into this position, the game typically comes down to to the last few turns in which each player is thinking they need just one more go to cause enough routs to matter and once all the various parts of the army get to a state in which their Break Point is easily scored, that becomes both true and elusive.

My sister webspace COMMANDERS is a bit more snippet based than here. Link.
https://commanders.simdif.com

A post looking at the principle mechanics of the game LINK
http://battlefieldswarriors.blogspot.com/2014/05/invasion-1066-battle-of-hastings.html

A post looking at the Stamford Bridge game. LINK