It was a learning game for Mike, so we only got through a couple of turns in a couple of hours of play, but we both really like the system.

This morning, I picked up where we left off and played on, solo. 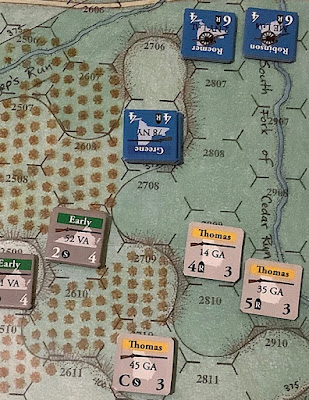 The photo shows the Confederate right flank at the start of the third turn, at the conclusion of the artillery phase. It is 6.20 PM, Thomas and Early had been pressing the Union left flank, with Early pushing through the cornfields and Thomas skirting them, following the line of the South Fork of Cedar Run.

A collapse of the Union left would expose a gap running from Robert Hudson House to Hudson’s Mill and open the lateral Pike behind the Union position, to Culpeper Road, either trapping much of Banks’ II Corps (Army of Virginia) or allowing their flank to be rolled up.

Banks, with resources stretched on that flank,  responded to the threat by sending Greene ‘s 78th New York and 1 DC to the edge of the Cornfields, together with the gun batteries of Roemer and Robinson moving to cover the open ground.

Thomas’ advance brought his regiments directly in front of the newly placed Confederate artillery. Caught attacking over open and exposed ground, just 600
yards away from the guns, his Brigade suffered harshly.

But the crisis was by no means over and with the Confederate brigades of Archer and Pender about to arrive on the battlefield, this flank was going to come under significant pressure.

This system looks like it will generate plenty of localised regimental action that I can port over to by 12mm figures and hex terrain, that would give a good game in a 4' x3' space.

In the meantime, here is a look at some new Cornfield terrain that I have been working on for 28mm, using Christmas crafting pieces sold in The Works (UK high street stationary focussed retail outlet). You get bags of 8 x 1 foot lengths of a sort of thin Christmas tree type material for just £1. When cut down to 30mm, they give a fair representation of a corn field at normal viewing distances.

I have made two trays of corn for this field, which can be removed to allow troops to be represented in the space. Both pieces can also be removed and replaced with a bit of teddy bear fur to re-purpose as a wheat field.
Posted by Norm at 06:02