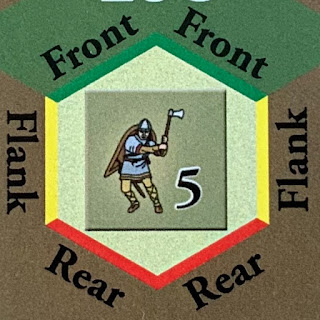 With the anniversary of the battle just a week away, Invasion 1066: Stamford Bridge, of my own design and published by Revolution Games, hits the table.

The situation covers Harold’s fast response to the invasion in the north by the Viking army under King Harald Hardrada. The armies are facing each other on the mud flats near to the River Derwent.

This always gives a very different game to the hard grind of its sister design (Hastings) and is pretty much a hack’n slash affair, that generates early shocking losses by comparison.

Invasion 1066 Stamford Bridge is a small format game with 140 counters and a 17” x 11” map. The historical set up has Harold’s Anglo-Danish army already on the far side of the River Derwent.

The Vikings have formed up on the mud flats, but being caught by surprise, many soldiers in this army had left their armour back on the longboats back at the village of Riccall on the River Ouse, downstream from York. This is represented by the Viking front line being filled by units that are face down, their true strength not known to either side. Some will have their armour and some won’t.

Around 2500 soldiers of the Viking army had been left back at Ricall, ten miles away and when they heard of Harold’s presence, they ran the distance to the Stamford Bridge battlefield. Led by Eystein Orri, these troops arrived fairly exhausted, but even so, the warriors literally burst onto the battlefield and for a moment, the battle hung in the balance due to their intervention.

This explosive arrival of reinforcements has become known as Orri’s Storm (or Gorcock’s Storm) and this originally was the title of the game in the early days, when I was putting self published (DTP) copies out. Happily, Revolution Games took the title and put out a professionalised version, which is what we will use today.

System wise, the only real things of note are; the Viking front line has ‘untried’ troops, some with armour, some without. Archers go ‘out of arrows’ and are removed from play whenever they roll a 1 or 2. When units are removed due to losses, all friendlies around them must take a morale test, this is adjusted for casualties suffered so far and a failed test causes a local rout.

This means as the game trundles on, ever higher losses result in increasing routs. Combat is not mandatory, but if you do attack and are successful, the attacker must advance into the vacant hex and keep their facing - this very often leaves their own flanks exposed and as line cohesion breaks down, casualties increase through a series of local flank attacks.

Turn 1. The opening turns are adjusted to recognised that Harold had to get his army across a narrow bridge and then deploy on the far side. This built in delay means that on turn 1, the Anglo-Danish army can’t move .... except if they take up the option of swapping out 4 housecarl units for 4 mounted housecarl units, they can use that cavalry.

I included this option purely because of the reference of mounted men made in Snorri Sturluson's Heimskingla saga, but I am not inclined to have mounted units in this army, so I didn’t adopt the optional rule and so nothing happens on turn 1. The Vikings hold firm, steadfast in their shieldwall defence.

Turn 2. The housecarls and archers are released this turn (but not the Fyrd) and so the housecarl move up and engage all of those ‘inverted’ front line Viking units. As each attack is announced and executed, the strengths of the defenders are revealed and by pure chance, the units without armour (strength 4) are all grouped on the Viking right.

The first attack goes in on the far left, 5 Combat Points Vs 4 Combat Points, so the Housecarl unit attacks the Hirdmenn unit with a +1 advantage (units cannot ‘gang up’ in this system), the die is rolled and both attacker and defender go ‘Disordered’.

Disordered units cannot attack and their movement is reduced to 2. Worse, their combat value drops to 3. They test to re-order, but cannot do this when in an enemy Zone of Control. As armies become disordered they become less effective and vulnerable. Pulling disordered units out of the line to recover and feeding fresh units in becomes part of good army management.

On the 4th attack, the housecarls roll a ‘1’. When this happens while attacking a good ordered hirdmenn unit, the play is momentarily suspended while the hirdmenn unit throws in a counter-attack with a +1 modifier, representing berserker attacks.

In this first wave of attacks, the housecarls actually took very high casualties (4 units), which is enough to start to influence future morale tests as casualties are added to the morale die roll. Worse, gaps have opened in the Anglo-Danish line and the Vikings push into them, to attack the exposed flanks of individual units. This takes the housecarl losses up to 9, which is pretty horrendous even for this game.

Turn 3. The Vikings have now left the the discipline of their own shieldwall and are exposed in the open. Now it is their turn to suffer at the hands of housecarls exploiting gaps and flanks.

The swirling confusion of battle has started. Viking levy and Anglo-Danish fyrd are having to come up and fill gaps in their respective front lines. The first housecarl unit routs!

Turn 4. The two armies are in full contact, exploiting weakness wherever they can find it.

Turn 5. The Orri reinforcements arrive at Millsike Beck on the Viking left. This looks serious for the Anglo-Danish, as their own losses are increasing and now Orri might just tip the balance. Anglo-Danish leaders Gyrth and Waltheof throw themselves into battle with some ferocity and the Viking levy on their right start to rout.

Gyrth is in the thick of it and survives several personal attacks. Both sides are tiring .... can Harold cause enough harm to the original Viking force before Orri strikes?

Turn 6.  The entire original Viking line disengages and pulls back, heavily disordered and rally around their King (Hardrada), while Orri continues his advance on the Viking left. The Viking withdrawal has given the Anglo-Danish some breathing space and Harold shifts forces to his right, ready to meet Orri and to protect his escape route over the River Derwent (where the roads converge).

Turn 7. Hardrada’s original army are under increasing pressure and routing in greater numbers, but the heavy losses amongst the housecarls means that the General Fyrd (strength 3) are now having to do more of the fighting and they are more likely to suffer disorder results in their attacks.

On turn 7, the Orri exhaustion rule kicks in. This recognises that the men have run for 10 miles on the hot day and are exhausted. From now on, Orri’s men will not be able to recover from disorder or rout results, this will slowly degraded their attack capability. They need to strike now.

Hardrada’s men are falling further back, while Orri is on a path to try and punch through Harold's right and reach the Derwent crossing, but Harolds forces on that flank are thickening.

Turn 8. Harold’s Fyrd on the right, rush forward to try and disrupt Orri’s advance. Orri’s attack is running out of steam and unlikely to penetrate through the thickening of the enemy line, but they may yet inflict enough casualties to win the day.

Turn 9. With renewed energy King Hardrada attacks local housecarls, but as he drives into the Anglo-Danish line, he becomes surrounded and embroiled in his attack. Tostig moves to his support him. The distraction by Hardrada is coming too late as Orri is increasingly seeing the effects of exhaustion and even some of his men are routing.

Turn 10. As the fighting dies down, a band of housecarls press Orri in his flank, destroying the unit and with them, fighting to the last, Orri also dies.

Victory - Neither side have managed to capture the escape route of the other, so determining a winner purely comes down to losses. The Anglo-Danish score the victory, gaining 85 victory points compared to 71 Viking VP’s.

In the real battle, the Vikings had invaded England using 300 longships, but they only needed 24 vessels to take the survivors home, perhaps this is what we have seen today!

There were plenty of moments of high drama and in truth, by the end of turn 2, going into 3, I was convinced that Harold had already lost and that there wasn't really a game left to report on ..... wrong and quite typical of the swings of fortune that the system allows.

The fact that in the opening rounds of battle, the right of the Viking front line was found to have all of the unarmoured troops, was probably the main cause of the Viking retreat mid game, despite the housecarls overall taking such heavy losses. This in turn allowed Harold to transfer much of his strength over to his right to stop Orri.

The game hasn’t hit the table for a while, so the anniversary battle was a good excuse to lock swords again.