A return to Mill Creek (ACW) 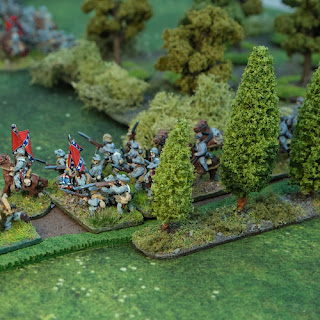 Another go of the ‘Action at Mill Creek’ scenario, taken from the Two Flags - One Nation rules. This is an outing with the open table (i.e. non-hexed) version of the rules as part of ongoing refinement of some new introductions to the rules.

The table is just 4´ x 3´ 8´´  and the figures are Kallistra 12mm, with 40mm frontages for bases and two bases forming a regiment for a total frontage of 80mm. Note, in the Resource Section below, there is a link to a previous post on the same battle that uses 3 bases per regiment, for a frontage of 120mm if those using the 60mm Epic bases would like to compare the impact on this playing space (negligible).

Essentially, the Union have two brigades to defend the high ground and bridge. The Confederates have three brigades making their assault. The Union have a third brigade, which will arrive randomly in dribs and drabs. Can the Confederates do all that is needed before Union reinforcements arrive?

The Confederates roll on the arming table and three units get smoothbore muskets, two of those units form Kershaw’s

Brigade, who also has the divisional artillery. The Union do

not get any smoothbore muskets.

The Commanders roll for any special abilities. Richardson (Union) gets ‘Leads from the front’ and Kershaw (Confederate) gets ‘Superb tactician’. 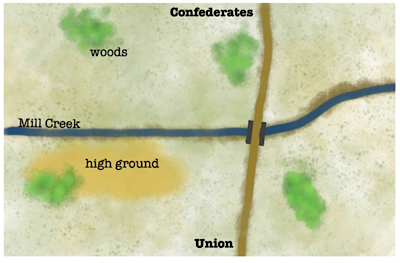 Above - this is our battlefield as described in the rulebook. The Confederate objectives are to get two regiments onto the high ground and to control both ends of the bridge. 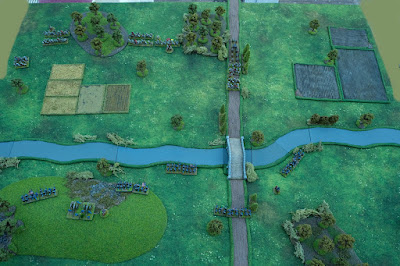 Above - this is how that translates to the table. You are seeing the end of turn 1. All three Confederate brigades are on the table and the Union can now see where the emphasis of attack is coming from, which is a two brigade attack against the hill and a single brigade push up the road towards the bridge.

Union - Porter held the area of high ground and the creek bank to the left of the bridge. The Union artillery was on the hill crest. Richardson originally set up along the banks of the brook to the right of the bridge, expecting the attack to come across the fields.

They were taken by surprise by Kershaw’s aggressive movement up the Creek Road, moving directly on the bridge. Richardson realised his deployment mistake and his regiments urgently dislocated to better cover the road / bridge. 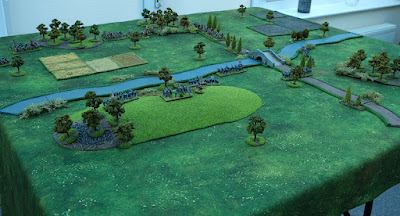 You may notice in the centre of the Confederate line that there is a two horsed, flagged command base. This is Elzey, the Divisional Commander. He had deployed with the 6th Louisiana to boost their movement, which immediately attracted the attention of the Union artillery. They inflicted a Heavy Casualty, causing the unit to test their ‘Capability’. They fail and fall back disordered. Elzey tested for Commander Risk, but was fine.

A random event occurred that advanced the game one complete turn, so now the Confederates had less time to do what is

Seibal’s Brigade (Confederate right) had been advancing in supported line to assault the hill, but on his far right, he had sent 13th Virginia right up to the creek edge, in column, to hasten their advance, but they ran into deadly accurate fire from the high ground and took four Heavy Casualties (devastating), though they stood their ground.

Grey Confederate uniforms started to pour over the bridge. Richardson, defending the far end with a single regiment (9th Indiana), cursed the delayed Union reinforcement! moments later, his regiment was pushed back by the charging Confederates, who now controlled both ends of the bridge.

In the creek, the brigades of Holmes and Seibals, gather, increasingly becoming disordered by the creek and the fire from the high ground before them. Never-the-less, supported by artillery, the Confederates made a concerted push from the creek uphill and Union troops were either pushed back or chose to fall back. The artillery, the anchor point of the defence, limbered up and withdrew. 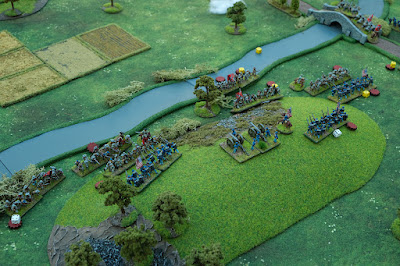 Uncertainty at the bridge.

the foot of the bridge.

The question now was whether 7th Ohio could hold out long enough for the reinforcements to arrive. It was going to take the disordered confederates some time to sort themselves out.

The battle had reached a finely balanced point. All the Confederates need at the moment to win is to capture the Union end of the bridge.

Victory at the high ground.

Having re-ordered their regiments at the hill, Holmes and Seibals pressed on and started to push the heavily shaken Porters

brigade from the table - this sector was theirs!

A great cry of Huzzah! was heard from the bridge, what can it mean?

Not only had Richardson’s 7th Ohio held the foot of the bridge, but volley after volley into the restricted gateway took a very

heavy toll on the Confederates, who in desperation tried one

more charge, but they got a ‘half hearted’ result and things

rather fell apart after that. 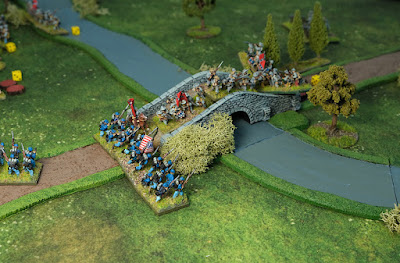 Keyes did get the first two of his reinforcing regiments to the bridge and with four good order Union regiments in that locality and a state of great disorder and loss amongst Kershaw's Confederate brigade, the bridge was secure. 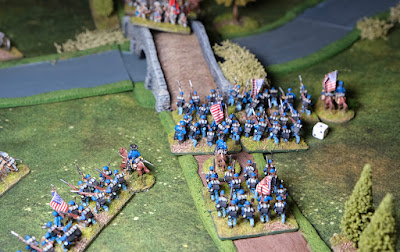 There were not enough turns left for the Holmes and Seibels at the high ground to re-direct their attention towards the bridge and so despite their great success at the hill, the game was marked up as a Union victory due to the Confederate failure to also capture the bridge, though from this generals seat, the final situation might best be described as a draw.

The Open table rules continue to work well, though I didn’t really use the new skirmisher rules except for one unit that wanted

to have an easy route through the wooded part of the hill.

The multiple disorder markers is also working well. The two brigade attack across the creek and uphill left the two Confederate Brigades very disordered, with multiple markers on them and they took a couple of turns to sort themselves out, which brought a natural lull in the sector.

There were nuances such as the regiment that was thrown back in disorder, that disordered the unit it ran through and then picked up another disorder by re-entering the creek in their retreat.

On the flip side of that, there was the instance of one unit rolling off all three of their disorder markers in one go, suddenly bringing new options and they became a lead unit in the renewed advance.

I diced to match the three Confederate brigades to each chosen jumping off point and it was perhaps unfortunate that the smallest brigade (2 regiments with Kershaw) got allocated the axis of attack for the bridge. Had they had another fresh regiment on hand to rotate into the resulting inferno, they may have won the day at the bridge.

Also the artillery was with Kershaw …. not the preferred part of the battlefield for its deployment.

The Union reinforcement was a nightmare, with the first unit not arriving until turn 6 (the earliest it can arrive is turn 2) and then taking two turns to get into meaningful fighting positions. However, ultimately, the arrival of Keyes did ensure that the bridge would stay in Union hands.

At the end, on the Union left, Porter was very hard pressed. Two of his regiments were on 7 hits and at the table edge, so very likely to fully rout any time soon and his third regiment was about to be hit in the flank, so Union defeat on the left was pretty much total. I had them vacate the high ground, rather than fighting to the last, simply to replicate the realistic decision that would be taken as part of a campaign, but it wasn’t enough to save them.

All in all, an enjoyable game. I may return to the initial set-up positions of these forces in the near future and re-run this with the Pickett’s Charge rules, for comparison.

Table mat by Geek Villain, river, roads and fields are latex from Timecast, the hill and trees are from S&A scenics, the bridge is from Battlescale and the figures are by Kallistra.

A previous fight at the creek using the same rules, but using 3 bases for regiments instead of 2 and giving a bit more explanation of the system. LINK