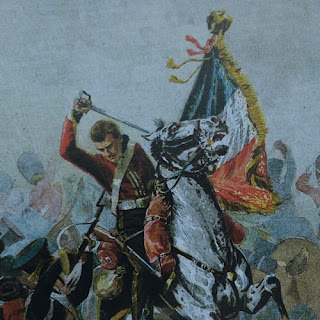 This is one of four games that comes with GMT's 'Fading Glory' quad, covering the battles of Salamanca, Smolensk, Borodino and Waterloo.

The '20' series is a collection of napoleonic titles that work to a series rulebook and each battle usually has no more than 20 counters (units) on the table, which for most of the games are each representing corps.

In the Salamanca game, the units mostly represent divisions. The historical scenario puts you straight into the action, which gives a short game, ideal as an introductory scenario.

Today however, I have gone for the 'full' three day battle. This begins with an empty battlefield and units from both sides start arriving on turn 1. It gives an open canvas for the battle to develop in different ways.

The rest of this this post just gives a brief overview of that game. Please use the 'read more' tab to continue. 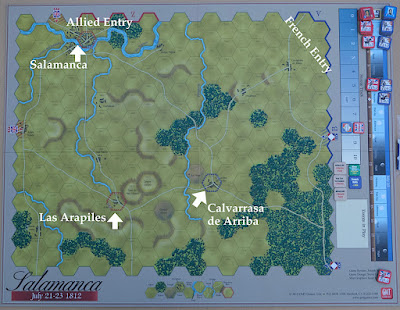 There is an Army Morale Track and each army starts at 8 morale points. During play, some routs, all units breaking and some other functions such as Forced March etc. will reduce a player's morale status. Once the morale of a force reaches the zero box, they instantly lose the game.

During daylight turns, once units make contact, they can't voluntarily disengage and attacking is compulsory, so care and thought needs to go into at what point you are happy to engage the enemy.

During night turns the opposite is true, units can disengage and can't make a fresh contact with the enemy. Also, units will recover 1 morale level from resting and there is a chance to bring some broken units back into play via a rally sequence.

At night, you can also lower the enemy morale by occupying their victory objective(s). For the Allies, they need to  protect Salamanca and Las Arapiles. The French need to protect Calvarrasa de Arriba.

It is the morning turn on 21st June. Both armies start to enter the board and they are naturally drawn to protect their respective victory hexes of Las Arapiles and Calvarrasa.

The allies hold some forces back to protect Salamanca from a sudden attack from the French right wing.

However, Marmont only threatens Salamanca with a small force and the bulk of the French army is moving to concentrate nearer Las Arapiles - Wellington may be in trouble!

Morning 22nd July - Wellington has occupied the high ground in front of the town. His forces around Salamanca also start to move down to join him, putting pressure on the French right.

Marmont decides to attack at once, before the British can fully concentrate. His frontal assault is bloodily repulsed. His 6th Division break and Marmont temporarily leaves the field, trying to recover them.

For Wellington, this is a golden moment to counter-attack, but it all goes disastrously wrong, they lose 5th Division and both 1st and 4th Divisions rout!

By the end of the day, they have fought each other to a standstill. Casualties had been very high, especially due to a series of unlucky 'Exchange' results. The Allies have lost 3 units and the french 4. Wellington's Morale Level is down to 2 and the French are sitting at 4. 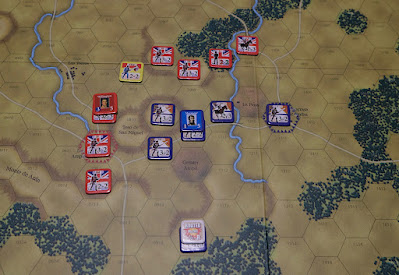 Worse - after capturing Las Arapiles in the morning, the French had been kicked out by late evening. As night draws in, both sides are down to just one Morale Point each, so both sides are just one adverse event away from total collapse.

Interestingly (and annoyingly for them), this means that had the French managed to hold on to Las Arapiles into the previous night turn, the Allies would have lost another Morale Point overnight and lost the game with their morale collapsing.

It was all enough to send the French Morale Track crashing down to zero and they immediately lost the game. The scenario potentially lasts for 5 more turns (to get to the final night turn), but I think over that time, the French might have struggled even to hold onto Calvarrasa de Arriba.

Conclusions. The successful '20' series has a big fan base, but also divides opinion, with some gamers feeling that it does not have enough 'simulation' value.

Regardless, it is a fun game with lots of local tactical nuances, giving a full game in a single sitting that will engage both players throughout (it can be played solo, with the gamer operating both sides).

One of the strengths is that it makes a good campaign base to generate smaller battles that miniatures players can then move to the tabletop. So something like our game today saw action around a bridge, against high ground and an assault and counter-assault on a town.  Each of these smaller slices of action from the big battle can be fought by those with smaller tables and smaller collections (me).

Once I get my 1809 stuff painted up, I quite fancy using the The Danube 1809 '20' game to generate the various Wagram / Essling situations.

Anyway, a very enjoyable game that I played solo, to re-familiarise myself with the system, ready for a face-to-face game this Thursday.

An earlier blog article that spends a bit more time explaining the system, covering the battle of Borodino. LINK

Commanders is my sister webspace. It is more snippet based than here and follows various projects and games. LINK