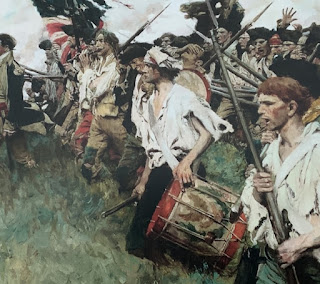 I doubt the Little Wars TV group need an introduction, but for those that don’t know, they are an American wargame club that also put out excellent quality videos covering a wide variety of wargamed battles, with a strong element of supporting historical fact in the presentation.

They have become a high profile part of the fabric of the figure gaming community and in my view, they share an equal presence and influence to something like a professional wargames magazine.

They have recently produced a set of rules covering tabletop battles of the American Revolution and together with supporting scenarios, these are available in either PDF or hard copy format.

I have just bought the physical copy and my initial view is that I wish all of my rulebooks looked like this!

For the rest of this post, which gives a closer look at the content, please use the ‘read more’ tab’.

I should remind readers that this is not a review site. I just write about the things that I have paid for and that I like, so posts on this blog that look like reviews are more likely to be subjective than objective, but I still try to be reasoned.

Live Free or Die has been put together by Greg Wagman, but is an amalgamation of inspiration from an original rule set by Andy Callan called Loose Files & American Scramble (first published in issue 1 of Wargames Illustrated in 1987) and a committee of ideas and discussion by the Little Wars TV group. The physical booklet is published by On Military Matters.

Fifty Percent of the sales value is being donated to the not for profit American Battlefield Trust.

A point well made is the declaration on the copyright page which states ‘Please purchase only authorized editions. Your support of the rights of the authors and the publisher, On Military Matters, is very much appreciated’.

There is likewise a request not to reproduce elements of the package without express permission of the publisher. In recognition of that, the rest of this post will avoid reproducing artwork or charts etc.

HOWEVER, the Resource Section below gives a link to the Little Wars TV web page that is very rich in visual content, with two free downloadable scenarios that show this lovely rule book off and also there is a video that runs through the sequence of play of a single turn. Also there is a link to the Brandywine video, which covers the full battle and is one of the most nicely executed wargame replay videos that I have seen. These downloads are well worth visiting and of course will save much verbage here!

The physical format gives us a full colour 72 page booklet that is spiral bound, using a nice quality paper that keeps the print sharp and colours vibrant. The spiral is a quality product that easily allows the book to fully open on the table or to be folder back on itself without snags.

The booklet is essentially divided into four sections. Firstly a four page rule section (yes! 4 pages of rules), followed by two pages of design notes (by Greg Wagman and Tom McKinney). The bulk of the booklet is taken up by nicely presented scenarios and finally there is a perforated sheet that allows a single sided quick reference sheet to be detached from the rule book. I will laminate my play sheet.

The four pages of rules are nicely and clearly laid out. They have some interesting mechanisms, are complete and although I have not played them, I get the sense that they will punch above their weight in play.

There were two sentences that I was unclear about, one looks to have a typo in it and I am awaiting clarification and the other is a loosely worded sentence that is open to interpretation - though I had this answered in the demo video.

Some system headline rules are that;

Units are formed from individual bases, with the number of bases per unit varying, each representing around 50 - 75 men.

Each force gets Command Points and these can be spent on making units do manoeuvre related things (think PIPS). Better commanders may be able to increase the availability of the number of Command Points on a turn by turn basis.

Sides roll for initiative each turn, with the winner choosing whether to go first or second in the Charge and Movement Phases, with all other phases being simultaneous.

Units that declare a charge get randomised movement allowances. They might not make contact in the charge, but would still receive incoming fire from the charge target!

Units in line can deliver volley fire, needing 5’s and 6’s to hit, but if they move, they can conduct hasty fire instead, which needs 6’s (only) to hit.

Hits from fire create demoralisation, which builds up until 5 demoralisations remove a base. Melee can also do this, but additionally it can also cause immediate base removal regardless of demoralisation status.

Units are classed 1 to 4, with 1st class representing Grenadiers and Light Infantry, while 4th class represents Militia, Indians and other irregulars. Class determines how many dice a unit can roll, when it is forced to take a morale test following the loss of a base.

The scenarios are all based around a 6’ x 4’ table (thank you!). Any scale of figures can be used, though the rules are assuming that 15mm or less are employed on one inch square bases.

Each scenario is constructed with Set Up instructions, Objectives, Game Notes, Notes about each army, notes on the historical outcome, lists for Orders of Battle that include the unit name, it's class and how many bases are needed. There is a schematic map with a side bar giving terrain notes. Finally there is a roster for each side that can be copied and cut out to provide unit labels.

A major plus for me is that this is a self contained set with rules and scenarios, no other purchases are necessary (thank you).

SCENARIOS - My hard copy includes the 3 scenarios that come with the rules, plus the Victory or Death module, which gives another 10 scenarios, as follows;

Princeton - this is described as being suitable for an introductory game. As with all the scenarios, we are advised how many bases are needed. Here, the British get 1 commander, 24 bases of infantry and 1 artillery base. The Americans get 2 commanders, 75 infantry bases and 2 artillery bases. The British win if they maintain control of one of two possible road exits and inflict higher losses against the Americans.

Germantown - The Americans must be in control of the Meeting House crossroads and inflicted more losses on the British than they suffer themselves. The terrain notes say that if possible, increase the table size to 7’ x 5’ or even 8’ x 6’. This is the only scenario that suggests the game might need more room to breathe.

Bunker Hill - In terms of numbers, the sides are fairly evenly matched. The British do get 2 ships and that firepower is represented by 2 off-shore field guns with a couple of scenario rules thrown in to reflect their character.

Harlem Heights - This is another introductory scenario. It is a 10 turn classic meeting engagement, with regiments being fed in piecemeal. The objective to inflict higher casualties to the other side.

White Plains - The British must clear Chatterton Hill and seize a road. There are some variables in the game in terms of where the Hessians arrive and whether the British deploy from a reserve.

Trenton - An interesting scenario that has some ‘what if’ options and each side has a Random Event Table, something I am always happy to see.

Brandywine - This is potentially a huge battlefield, but here it is tamed, so that we are just looking at the Battle of Birmingham Hill and we keep our 6’ x 4’ table. The Little Wars TV group recently did a superb video on the big picture of the battle across four tables, the video has alternative endings depending upon viewer decisions, a nice touch of interactivity with the audience. There is a link to the video in the Resource Section below.

First Saratoga - A medium sized game lasting for 11 turns in which the British win by controlling objectives. The map notes state that the streams are so steeply banked that they count as rough ground for infantry and cannot be crossed by artillery.

NOTE - LWTV have put up a free download that gives us Second Saratoga as a scenario, so this is a bonus to this package. There is a link in the Resource Section below.

Monmouth - This opens with American forces attacking a retreating British column, but over the course of the game, British reinforcements arrive, turning the game into a meeting engagement. There are some initiative and rallying penalties, that combined with interesting terrain and the arrival of fresh units, looks to make this quite a dynamic scenario, with both sides having problems that will give players an emotional connection to the historical demands of the situation (good).

Monmouth …. The Afternoon! - This is the second part of the big battle. We are still on our 6’ x 4’, but the large scenario allows for 2 - 6 players. There is a simple but effective looking rule to reflect heat stroke, which was a battle factor.

Guilford Courthouse - A medium sized scenario where the British get a minor victory for inflicting heavier casualties on the Americans and a major victory for securing one of two roads. These conditions should give an interesting battle as the necessary fight for the road will create the casualty aspect of the victory conditions.

Eutaw Springs - One of the smaller scenarios, though it lasts for 12 turns. Major General Nathanael Greene automatically gets the initiative for the first 3 turns, but he also suffers some control problems with special rules that cover looting of the British  camp.

So there we are, a really nice product from LWTV, well presented and an all in one, self contained package. Everything in there is meaningful i.e. no ‘filler’ pages and 50% of proceedings go to American Battlefield Trust, which is a not for profit organisation.

I have covered several of the battles mentioned here as boardgames, but at the moment, I don’t actually have any AWI armies, so that future goal will now be quickly brought forwards - so for this reader, the product has inspired, which I am sure is something that will please the creators.

As I said in the opening, I wish more of my rule sets looked like this, combining an easy system (thank you Andy Callan) with good support material and excellent aesthetics. There are some very good skills amongst this wargaming group.

I bought my copy from Caliver Books in the UK, which at the moment the price is £30 plus shipping.

This link will take you to the resource page at Little Wars, where you can download product, get a couple of free scenarios and see an excellent video that runs through a single turn of the game.

BRANDYWINE - this is a video covering the full battle, put out by Little Wars TV and is compelling watching. It says everything about the capabilities, commitment and enthusiasm of this gaming group.

My sister webspace COMMANDERS is being re-configured to showcase various figure and boardgame systems that I am enjoying and give a flavour of where current ongoing projects are up to. Live Free or Die will be finding a home there. Link.