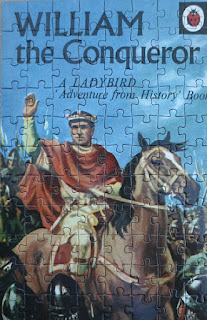 The above graphic is a completed 88 piece jigsaw from the Hero’s and Heroins series by the Lagoon Group, covering the iconic Ladybird Books Adventure from History series.

One of my five front burner Pocket Army projects is the 1066 Norman / Anglo - Saxon combo, but with so much in front of me to do, I suspected that this would not get even started until some time next year …… However!

A couple of ‘events’ have brought some command figures into my immediate possession and for one reason or another, these are likely to hit the painting sticks early and signal the project as started!

This post is just going to look at those nice command figures and discuss the plotting of the way forward. Please use the ‘read more’ tab for the rest of this post.

There are two prime reasons for starting off my 1066 collection boxes now. Firstly, I have just received a beautiful pre-painted base that begs to be a Norman command base, perhaps even Bishop Odo himself.

Secondly, my daughter has recently treated me to a pair of period command packs from Gripping Beast. The first is a mounted William the Conqueror figure, the second is a bag of three Anglo - Saxon leaders, representing King Harold and his two brothers, Gyrth and Leofwine. 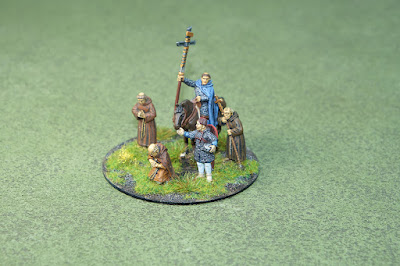 Above (click on image to enlarge) - I first saw this lovely base at the Partizan wargame show on the Colonel Bill’s stand (a very active supporter of the show scene) in May, mentally noted it for returning to it later and then left the show totally forgetting about it - Doh!

I noted over the next few weeks on the website, that it had not sold and so was able to see it again at the Phalanx show four weeks later.

I picked it up, put it down, picked it up and put it down, completely undecided as my spend at the show had been mainly on the Warlord Games’ new Prussian Epic release and I was busy looking for terrain to support that scale. Anyway, stupidly, I left the show without it, but was still thinking about it on the way home. Needless to say, once home, I mail ordered it! 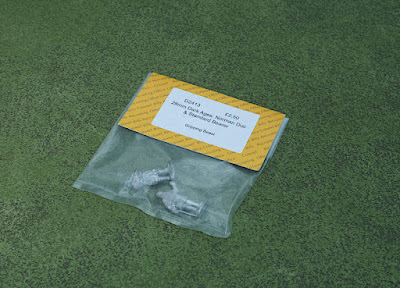 Above - The Colonel Bill’s website is a superb place to go to get one-off pieces, so while on the site, I picked up a pack of Norman foot command, containing two unpainted metal figures originally from Gripping Beast, described as ‘Norman Duc & standard bearer’. One figure has an open hand for a standard to be attached (not supplied) and a separate sword to fit the other hand, while the commander is a clever sculpt of someone deep in thought - perhaps trying to remember the morale test modifiers :-) 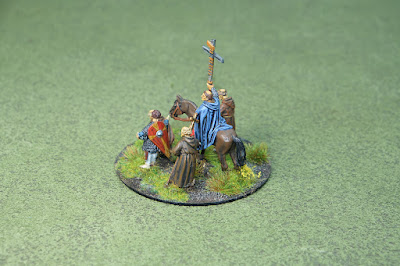 Above - I am advised that the base contains Perry figures, painted by the hand of Peter Sands. It was part of a bigger diorama, but Colonel Bill’s had it split and this part re-based on a 75mm (3”) stand, making it easier to sell. The scene is actually a religious command stand from the Crusades period, but I’m not going to let that stand in the way of some 1066 goodness.

My other command figures have been cleaned and primed. Being a gift, I want to get them painted up and looking splendid as soon as possible. 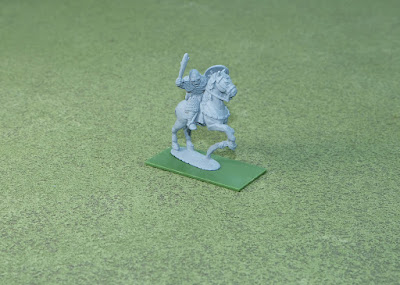 Above - The first is the William the Conqueror mounted figure from Gripping beast. The figure is leaning out to one side with his command baton raised, ready to strike some poor soul.

I have in mind to base this with an Anglo - Saxon foot soldier (plastic), that is suitably posed and standing just below the falling baton to show a sort of one sided engagement between the two figures - it will be an interesting change to have an enemy figure on a command base! 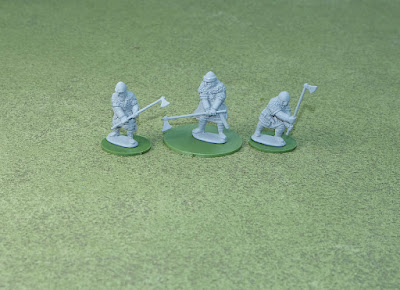 Above - For each of the Anglo - Saxon command figures, I think a 60mm round base, shared with two other foot warriors would look about right, with perhaps a wind sock (command banner) being with at least Harold.

All three figures are wielding the long axe, so each base as a whole will need to show an attacking posture.

All of these figures taken together will provide three command bases for each army, which is fine, though I think for the Normans, I would like to get another command base and then the religious command base that I have just received can represent Bishop Odo behind the Norman line …. encouraging any routers to return to the fray.

Knowing that 1066 was going to be a thing for me, over the past couple of years, I have been picking up boxes of plastic 28’s. A little annoying, as at one time, I already owned most of these boxes, but sold them off cheaply at a show. That was not so much as being a period butterfly, but rather being scale indecisive and having a reckless clear-out!

Anyway, now in the war chest, there are Norman mounted knights, Norman foot infantry and archers from Conquest Games, Housecarls from Victrix Games and Thegns, common foot (Fyrd) and bow from Gripping Beast, so there is plenty already there to move this project on - probably to completion.

My sticking point has always been about basing. Most rules will allow the Anglo - Saxons / Anglo- Danish just a couple of Housecarl units at best. One will doubtless be with Harold as a royal bodyguard and the other in the line, likely as a superior unit.

However, at Hastings, the Housecarl deployed along the frontage of the army, giving it a hard and professional edge / face. Then there were the Thegns immediately with / behind them and then the masses of General Fyrd, holding the rear ranks.

At the moment, I am planning on simply doing superior bases, which with mix Housecarl and Thegn, with the former in the front rank. Then for the rest of the army, medium infantry bases composed entirely of the Fyrd. This would allow for the Hastings ‘feel’ that as the superior front line took losses, the Fyrd would step up to plug the gaps.

I have enjoyed the 80mm bases used with my Wars of the Roses armies, which work well and so as I will likely use the same rules, I see no reason to do anything different for the 1066 stuff.

Anyway, for the most part, this is quite a way off, though I rather fancy that these figures will be easier and quicker to paint than my slowly, slowly, really slowly, plodding napoleonic forces.

I do not get on too well with plastic glue, so use the summer months to get outside in the fresh air to put plastic figures together, to get enough assembled figures on stand-by to feed the winter painting, without having to resort to indoor gluing. To stand any chance of getting some 1066 bases up in the near future, I will need to schedule some figure building over the next couple of months.

I have put a link below to the Colonel Bill’s website. If by chance you do order from them, please consider adding a note that refers to the PHALANX wargame show.

This is not for my benefit, I NEVER get any sort of kick-back from anybody I refer to in this blog, it’s independent credentials are important to me, but preserving the show scene is vital, so if the company know that the sale relates to something from the show, rather than just a straight internet sale, then they are more likely to keep on supporting the show - thanks.

Anyway, that’s all for now, I am off to admire my new command base again. A high quality pre-paint purchase is a real and unusual treat for me - even Mrs. Wargamer looked at it, no doubt secretly hoping that I would get her one for Christmas :-)  what a great hobby!

PLEASE NOTE, THE COMMENT SECTION HAS BEEN SWITCHED OFF FOR NOW, BUT I DO APPRECIATE YOUR VISIT TO MY BLOG - thank you.