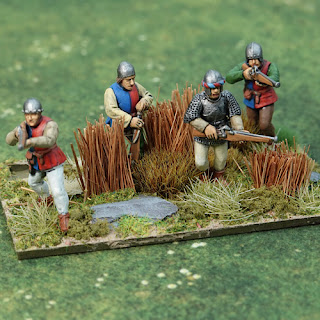 For the ‘World War of the Roses’ event ( being held 22nd / 23rd May 2021 - see resource section below), I decided to join in with my fledgling forces by concentrating on a part of the Bosworth field that is usually side-lined as an area of no activity.

Today we are looking at the inactivity of Lord Stanley, who we may accept as having Lancastrian sympathies ….. if only he had shown them! and Northumberland (Percy), who provided a significant force to King Richard III, but who appears to have retired from the battlefield without engaging the enemy.

While arguably these two magnates were holding the other in check, demonstrated by them simply ‘standing-off’, today we will assume that their motivations for wanting to fight were stronger and that they followed orders to engage from their respective army commanders, these being Henry Tudor for Lord Stanley and King Richard III for Percy 4th Earl of Northumberland.

For the rest of this post and unfolding story, please use the ‘read more’ tab.

We pick up the narrative at the point in the battle that Oxford and Norfolk have initially clashed on the Yorkist right and that fight has developed into a tough grinding contest. Richard, accepting that Lord Stanley has shown his hand to be a threat to the Yorkist left, rather than being a supposed ally (treachery; I hear ye cry), gives the order for Lord Stanley’s son, who has been held hostage by Richard for some months and is present on the battlefield, to be killed.

We now allow our narrative to spin out into one of imagination.

Needing to neutralise the danger of the Stanley brothers fully committing to Henry, Richard moves across to Percy’s position on his left and orders him to attack Lord Stanley, who presently threatens Percy’s flank.

Percy with a slight numbers advantage over Lord Stanley, was concerned that Sir. William Stanley was close enough to come to the rescue of his brother, but not wishing to show any hesitation in loyalty he offered;

Sire, every man shall don their armour and with honourable fealty

by sword, by bill, with righteous conviction and by virtue true

we shall suffer our enemy

to kneel before their King this day.

After hearing such fine words, Richard agreed to re-orientate some of his lighter artillery to support Percy, while directing around 80 of his heavy mounted household to cover the ground between the two Stanley brothers to discourage any union between them.This was their sole task and Richard kept their command separate from Percy in case Percy ‘ruined’ this most noble force in reckless deeds! 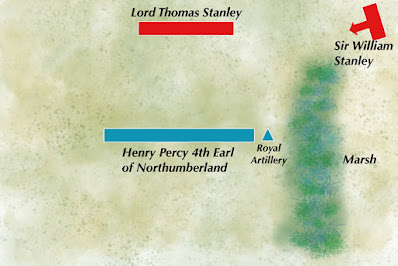 There was no time to delay, trumpets sounded and Percy’s Ward manoeuvred into position, re-orientating 90˚, moving from behind the marsh, to put it to his right. Light guns were manhandled to his right and archers took their place in the front lines.

This all took around 20 minutes, by which time, in another part of the battlefield, Richard’s right wing under Norfolk was under extreme pressure as French troops armed with long spear had suddenly appeared on their flank and were making gains.

Percy, who had effectively been the reserve (rearward), was now too committed to attacking Lord Stanley, to be able offer support to Richard’s right. Perhaps the Yorkist situation already doomed even as Percy launched his attack!

Lord Stanley upon seeing the manoeuvres unfold, set his archers along his front and sent riders to his brother, Sir. William Stanley, to ask for help.

Lancastrian reinforcements - (D3) Billmen levy as per the special rules.

Set-up as per the map. Lord Stanley and Percy start the game with their archers just within extreme longbow range of each other. Sir. William Stanley’s reinforcements do not start on the table.

By this time, Sir. William Stanley had already moved to commit to Henry’s position, covering Oxford’s right flank. On hearing of the likely attack against his brother, he ordered his stepson, Sir. Richard Corbet, to gather whatever levy he could and go to his brother’s aid. Once any of Percy’s units advance from their starting position OR after the Royal Artillery have fired twice OR the first time that a unit of Lord Stanley suffers a rout result (whichever occurs first), Lord Stanley rolls a D3 and that many levy bill contingents, sent from Sir. William, will enter the table to Lord Stanley’s far left.

On their first turn of arrival, the reinforcements have their total movement allowance, including any bonus, doubled. They count as being automatically in command and as though having a commander with them for Group Move purposes, until they get past the marsh, at which time normal rules apply and they fall under the command of Lord Stanley.

The maths of the game are that Lord Stanley starts slightly outnumbered, but once his brother’s reinforcement reach him, he will at least have parity or even be slightly stronger than Percy.

Rules being used are Sword & Spear with 28mm figures in a 4’x4’ space. Don’t worry too much about the flags and banners used not being entirely accurate for 1485 … I’m not :-)

Unsurprisingly, the engagement opens with both sides sending volleys of arrows at the other, together with Yorkist artillery laying fire against Lord Stanley’s left flank. Generally, artillery is quite weak, with the main benefit being its long reach. It does not really play a part in this action as it turns out ….. you may as well know that now!

Percy has a unit of levy archers amongst his front line, which predictably suffer, but the first rout actually comes from one of Lord Stanley’s retinue archer units. As per the special scenario rules (above), this triggers the arrival of Sir. William’s reinforcements. A two is rolled on a D3, so two units of levy billmen arrive on the table edge.

Percy’s mounted Men-at-Arms on seeing reinforcements arrive, ride out to intercept them, but their way is annoyingly barred by Lancastrian handgunners, who had been advancing to get within handgun range. They tangle with them, before riding them down, though they are now a little delayed and have suffered a casualty, so will no longer count as being fresh.

They press on and charge one of the reinforcement levy bill contingents, but with heavy fighting and the cavalry taking additional losses, they retire back to the Yorkist line.

On the other flank (Stanley’s right), the Lancastrian light cavalry have moved out to work around the Yorkist left flank, but Yorkist billmen and handgunners start to manoeuvre to negate any positional advantage that the cavalry might gain. The handgunners put down murderous fire that does significant harm to the comfort of the light horse.

To the centre, Percy’s archers are getting the worst of it, suffering at the hands of Lord Stanley’s excellent Welsh bowmen, while the Lancastrian levy reinforcements have at last reached Lord Stanley’s position and are reinforcing his line.

It becomes obvious to Percy that he is losing the archery duel and that he would now have to press on to quickly cover ground and take the fight to Lord Stanley.

Gathering his Men-at-Arms (foot) and a levy bill contingent, he makes surprisingly good time, aiming his heavy infantry at the enemy centre, so much so, that in one part of the line, Stanley’s archers cannot get out of the way quickly enough and find themselves in melee with their armoured foe.

Both sides are starting to feel the losses, the Stanleys are close to having to take their first break test, while Percy’s men are clearly tiring with each unit carrying casualties, but it looks like the battle is going to be decided in the centre. Stanley loses an archer unit there in the melee, causing everything to test, but it all holds.

Recovered, Percy’s heavy cavalry, under the command of one of Richard’s captains, once more go over onto the attack, hitting the reinforcing levy on Stanley’s left, but this quickly turns to disaster and a protracted melee sees Richard’s knights flee the field, worse, they take Percy’s levy bill unit with them. In just moments, Percy’s right wing has evaporated!

Both sides are on the brink of demoralisation, but though Percy has lost his right, his left has been slowly and successfully enveloping Stanley and finally a contingent of billmen, supported by archers and handgunners, crashes into Stanley’s right wing, putting Lord Stanley’s best troops to flight.

For Lord Stanley, the tipping point (50% casualty loss) has been reached and the Stanley force withdraw from the field, leaving Percy the victor …… just!

But what of Richard’s right flank? where Norfolk was fighting both Oxford and French spear - well that story is for another day!

The fight had been extremely tight, it just needed the next unit of either side to break and their entire army would collapse. In the end the dice conspired against Stanley’s Men at Arms. The billmen who attacked them activated first and then on their combat dice, the Men-at-Arms rolled the most useless of dice scores and that together with the two casualties that they had already absorbed from missile fire, was enough to see them off.

The game was very enjoyable and took a couple of hours to fight. The Sword & Spear rules work quite well for these sort of games as even with a low number of units per side, the game soon breaks down into a combination of smaller actions, where different parts of the battlefield come to feel quite important and separate from what is going on around them, which helps with keeping player interest.

I have found handgunners difficult because they don't seem to survive for long, but here, they caused problems for Richard's cavalry and also put 2 hits on the Lancastrian light cavalry, in both instances causing real problems for the horse.

Thanks to those who have organised the event and encouraged others to get their figures on the table. I am already aware of some superb looking games that have been put on the web (see the Lead Adventure Forum link below).

World War if the Roses Event - all is explained on the Lead Adventurer Forum. LINK

My sister webspace COMMANDERS is being re-configured to showcase various figure and boardgame systems that I am enjoying and give a flavour of current ongoing projects. Link.

An earlier post that discusses the Sword & Spear rules. LINK