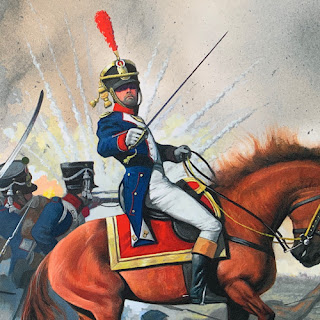 This is the latest set of rules from the Osprey 'Blue Cover' range, authored by Boyd Bruce and released just a few days ago, it puts Napoleonic warfare onto the tabletop, with army commanders, corps commanders and individual divisions at the heart of the game.

My initial feeling was that this was not a level that I wanted to game at, preferring battalions, squares, column of attack etc ……… so I bought them!

And I have to say that I am glad I did. I have only just received them and not had a chance to put any of the mechanics to the table, but a full reading has left me with some impressions that this post can share for those who may be thinking about buying.

Absolute Emperor is a 64 page, well illustrated and well presented volume, just as we have come to expect from Osprey. Mark Stacey is the illustrator and much of the artwork comes from the hand of Peter Dennis, being the copyright of Osprey Publishing Ltd. 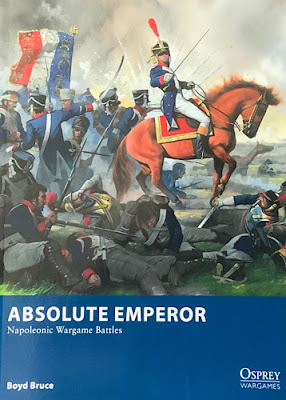 I suppose to best describe the ethos behind the rules, it helps to take three quotes from the author’s introduction;

“The best part of an old fashioned Napoleonic wargame is the masses of units on a massive table. The downside is spending three hours to set up, eighteen hours of playing without conclusion and three hours to clear everything away. It makes the game more work than play and that is the overkill.”

“Absolute Emperor is designed for the busy, multi - time - period enthusiast who wants a good Austerlitz in the morning, a cup of tea in the afternoon, then perhaps some football on the TV that evening. A perfect Saturday.

He goes on to say that 50 - 100 figures should provide for a playable army! For some, that is an attractive headline, though an underestimation of where I would want to be and the Eylau scenario in the book is perhaps a more representative sized 'army' game - more of which anon.

So the first thing to discuss is the army. ‘DON’T REBASE YOUR TROOPS’, well the author saw fit to put that in bold, so why shouldn’t I! Figure count and the number of bases don’t matter, what he wants is that unit frontages are standard across both armies and to this end he suggests 6” for infantry in line and 8” for cavalry in line if 28mm are being used.

For his own infantry, the author has based with four figures on 40mm x 40mm bases in a 2x2 ranking, so he will use 4 such bases (16 figures) for a unit and in this game a unit is a division (you can down size …. again more anon on such bath-tubbing goings on!).

Units operate with a 4” space to their front and 1” to their flanks and rear. This abstracts the space that small guns, skirmishers and detached battalions would operate in. So during movement, a unit would stop 4” away from an enemy unit - but, there is a separate charge phase later in the turn, in which units can charge 4”, so infantry intending to charge could move in the move phase and in effect add 4” onto that movement in the charge phase to make contact.

Ordinary movement (for 28’s) is 4” for line infantry and 6” for attack column. There are measurement conversions for smaller and larger scales.

The sequence of play is joint and semi - simultaneous. The player with the lowest ‘Elan’ will go first in each sub-phase, so they will move first, which allows the player with higher Elan, to then respond to that movement. The same for the fire phase, but the actual casualties / effects caused are not implemented until both sides have fired.

The Sequence of play is Command, Movement, Shooting, Charges, Combat and the rules are set out in that order, which is helpful.

I casually threw in the ‘Elan’ word above, but it is an important concept of play. Each leader has an elan rating and this rating is an ‘allowance’ which can be spent throughout play to re-roll an activation score, recover a unit (i.e. go from disordered to halted), change orders or re-roll an attack dice.

Elan can be gained or lost by circumstance in battle, such as capturing an enemy eagle, but if a commander’s elan ever drops to zero, then it is deemed that he has lost control and his divisions are automatically given retreat orders.

There I go again, incidentally slipping the ‘orders’ word in - yes that is important. Every corps has an order based around attack / hold / defend / flank march (and the one you don’t want …. Retreat!) and the divisions must comply with this. Commanders will have to spend their Elan allowance to change these orders, which is all part of the Command and Control aspect of the game.

The scenarios are interesting. The first three are linked starter scenarios and are rather like the scenarios that Don Featherstone has in his ‘Battles with Model Soldiers’ book, in which the first scenario has a couple of infantry units, then the second adds cavalry to the same setting and the third just has a bigger order of battle, all on the same landscape.

The Eylau scenario is less demanding, but you can see what I meant at the start of this post, that 50 - 100 figures might give a game, but it does not give what the author envisages for the ‘army game’, but interestingly it is a hint at the possibilities of dropping down a few levels to a tactical based game.

There is a section that allows the player to down scale the game. In effect a division become a battalion and a corps commander is a brigade commander. Essentially the game looks exactly the same, but there is a different emphasis. To help this along, skirmisher rules are introduced, cavalry can use their carbines and dismount and artillery gets a fire arc to show the tactical ability to track.

In some respects this does not seem a lot to convert army scale down to divisional action, but the system is already using the concept of squares and columns of attack. That can seem strange for a set of rules in which the author is essentially saying that the player is the army commander and ones influence in the game extends to corps commanders. So for the player to deliberately decide whether a unit (division) should be in line or attack column, seems to miss the point of command focus being with the army commander - however, it does place the rules in a middle ground that allows for an easy cross-over between big battle and small battle experiences, or bath-tubbing in old wargamer language.

There is a page that give some national characteristic pointers and these are mainly the obvious ones such as, British cavalry that win a combat cannot be recalled or Austrian troops 1797-1809 cannot use attack column.

There isn't anything there that stops the British using attack column, but if the British are in line, they get to re-roll one unsuccessful hit roll when shooting. That combined with more fire dice being used for anything in line, might be enough to persuade the British to prefer line.

There is of course plenty of content that I have not nailed down here, but it was only meant to be an overview based on an initial read, plus a bit more digging.

The proof of the pudding will be in the playing, so whatever I say here is missing that essential element of the conversation.

However, within those limits, I am glad I bought the rules. They are a well integrated and nicely presented and look like they will give the sort of game that suits me. I actually quite like the idea that they can flip-flop from grand tactical down to tactical if the player wants that and certainly those at the start of their collections can use that to their advantage.

I like the look of the modifiers that cover that relationship between the various arms and also that deal with situations and environments on the battlefield.

The AAR at the end of the book is a nice touch.

As with several of these Osprey books, they are just nice for their own sake, whether played or not (Rebels & Patriots I am looking at you!). Well done Mr. Bruce for bringing the big game to my small table, I like what you have done.

EDIT - I have come across a YouTube of an AAR that has the author present and advising on the rules - see Resource section below.

Complexity - Overall, I would rate this as sitting somewhere between a low to mid complexity game. The rules are well written and thorough, so I imagine it just needs to be played a bit to get the routines down and things to become second nature, only then will the true nuances reveal themselves.

There are a couple of one liners tucked away that can be missed or not remembered, such as a unit taking two casualties in the shooting phase become halted and 4 hits are disordered, so I will write myself a cheat sheet to catch these. An oversight in my view is the lack of a quick reference sheet, I shall make one, though it must be said that it is very easy to navigate the rules.

Despite the 'low complexity' sales pitch and the connection with some old style gaming, there are some modern elements here under the bonnet that I think will give some nuance and depth without the large rules overhead that can often go with such things.

Size - the rules start from the perspective of writing on behalf of 28mm figures on a 6x4 or larger table. Conversion to small scales essentially involve halving measurements (and doubling for 54mm fans). It is certainly a useful set for getting bigger figures into a smaller setting and 6" unit frontages will be a 'useful' feature for many in their home settings.

The rule booklet is small and self contained so no extra purchases are needed or shelf space taken.

Solitaire - I am hoping in play that this is a solitaire friendly set. I can't see anything immediately that jumps out as not being. Unit orders can be hidden in face to face games, so I suppose solo loses that, but solo players are used to such things. There is a rule that allows units that are out of sight of the enemy, such as behind a hill or BUA, to be marked with a blank, to maintain secrecy, but I can't see that being a biggie to a solo player.

Time - The author is saying 2 - 3 hours for a throw down game and an evening for any of the three major battle scenarios that he includes in the book. It is clear from his introduction that the author intentionally wants to remove barriers to players getting their figures to the table and to that end he embraces small collections as well as large and sees his rules being usable across the entire gamut of what resources players have to hand. In that respect, his cross-over between tactical and grand-tactical wins hands down.

A YouTube ARR withthe author present and advising, it gives insight into the system. LINK