A Lock ‘n Load scenario, Stalingrad 1942.The street lay silent, none daring to move for fear of attracting the attention of ever watchful snipers. The lulls between the intense firefights were short and filled with nervous tension, as men surviving on a minute by minute basis, prepared for the next round of fighting. Lt. Petrov, was the first to act. He saw movement across the street, screamed his orders and sub-machine gunners responded with devastating effect.

This article will be a straight forward AAR - anyone wanting a detailed look at the system should refer to my earlier post called 'Heroes of the Blitzkrieg' (see labels on the right under Lock 'n Load).

Those with a fondness of the first scenario in Basic Squad Leader (1977) ‘The Guards Counterattack’, will smile as they set this scenario up.

The scenario has two hidden events that effect the western (left) side of the board. They add a moment of excitement and a nice twist to the scenario, but in order for them to remain secret from the reader and so as not to spoil your first attempt at the scenario, I have excluded them from this account and have used a ‘spoiler block’ on the game board photograph.

The game opens with strong stacks in cover and providing efficient cross fires. Ordinarily, neither side would want to act first as they would become ‘spotted’ and that in turn would invite deadly fire. This balanced stalemate at the start of play has to be broken by the Russians, since game victory is dependent on them advancing and capturing two buildings (plus casualties effect VP scores).

Hence Lt. Petrov makes his spotting check, discovering an enemy squad and so the game opens with fires and counter-fires.

A - The west side of the board uses overlay ‘X’ and has two event markers placed either side of location ‘A’. There is just one unit on that half of the map, the German HMG weapons team (bottom hex row).B - This is a two hex building objective for victory.C - This is a four hex building objective for victory.D - At either end of this street, leader led, powerful stacks provide deadly cross-fires.

Petrov’s fire against building ‘C’ causes casualties and a follow up attack from mortars directed by Commissar Ilvanich, forces the occupants back, deeper into the building to seek aid from the medic. This deals with a central defender and MG42, but the Russians cannot risk crossing that street until one of the two German stacks at either end of it are dealt with.

It is immediately apparent that the Russians have superior numbers and can overwhelm the Germans and it seems that using this advantage in manoeuvre rather than firing is the best way to reduce the effect of that cross fire defence.

The tan coloured Russian stack send out one squad, moving adjacent to ‘D’. This is a real dilemma for Lt. Plassmann. He would ideally like to hold his fire, but even if just one enemy enters his hex, his forces will be locked down in melee for the rest of the turn. Reluctantly, one of his squads fire and the Russian squad is stopped and goes shaken.

With an excess of units, the Russians can afford to continue with this tactic and they throw another squad forward. Another of Plassmann’s squads fire, but misses and the Russian squad gets into the building and melee’s with Plassmann’s stack. It is something of a death and glory attack, but it has the effect of Plassmann’s hex being marked with a melee counter - they are effectively locked down as they are all considered activated.

This is now the weak point in the German defence and the Russians move to exploit it.

Lt. Kock at the other end of the street is reluctant to fire in support, as his squads have enemy closer by and he needs to hold his fire to check against those units using the same tactics.

Turn 2. Kock is adjacent to two shaken Russian squads. With the lower part of the board now compromised, his control of the entire street is no longer essential. He leads his squad to assault the adjacent shaken enemy. The hex is taken and the defenders automatically removed from the game.

The lack of German units able to opportunity fire, leaves the Russians encouraged to risk the move across the street and either occupy buildings or move next to enemy units.

Over on the western half of the board, the German MG team have edged forward and now have line of sight to event marker ‘A’. This activates the marker and the secret paragraphs on the scenario card are read. I will not go into detail here, but an interesting situation on this part of the board unfolds.

Turn 3. There are four melee combats occurring on the table and it is difficult to see how the Germans can survive another turn of this carnage.

Kock enters the Commissars hex and wins the melee outright and Plassmann is likewise successful in his hex. The Germans have lost both the VP buildings, but suddenly they are back in the game with two powerful and well led stacks. The situation on the western half of the board continues.

Perhaps a tactical mistake for the Germans, but their two stacks seek out combat with ‘easy’ adjacent targets. They win each melee easily but have been drawn away and distracted from their main objective, which is the recapture of the buildings (VP is based on points per hex rather than just control of the entire building). The clock is ticking, there are just 2 turns left.

Turn 5. The VP buildings are strongly held. The German stacks lay down fire in an effort to shake some enemy units and make their eventual charge across the street less fraught. Those fires are not effective and the turn is somewhat wasted.

Turn 6 (final turn). The Germans have no choice but to advance into the open in an attempt to storm the objective buildings. They are immediately stalled by very heavy opportunity fire and neither reach their respective buildings. 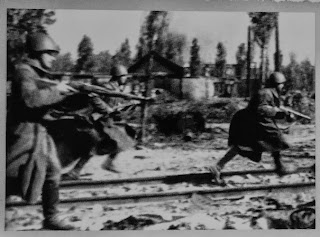 Conclusion. The Russians took the heaviest of the casualties, giving the Germans 13 victory points, but they held all six building objective hexes gaining 18 victory points and scoring another 8 VP’s for inflicting German casualties. The final score was 26 v 13 in favour of the Russians. The re-capture of just two building hexes (a 6 VP swing) would have made this a very tight game indeed.

This seems a tough scenario for the German player, though it didn’t help that the Russians gained the initiative on every game turn, giving them first strike capability. Perhaps with better management as to what unfolds on the western part of the board and some better luck on the eastern side, I can get a closer call next time.

All in all, this was an enjoyable scenario with interesting twists and nuances. It gives a lot of action for a small playing space and the event chits make a great contribution to solitaire play. I look forward to a re-match. Now knowing what the event markers will generate will not undermine either the fun or the way I would play.

Posted with Blogsy
Posted by Norm at 08:34