Getting ready for action at Caen.

A number of sources are reporting frantic activity by Commonwealth troops in a local village as anticipation of an immediate German counter-attack runs high.

The commander at scene is fresh back from a ‘Shoot and Scoot’ course at the local academy for ‘New Ideas and Optional Rules’ and is eager to see some of these new skills put to the test, having been promised that a troop of M10’s will be with her within the hour. 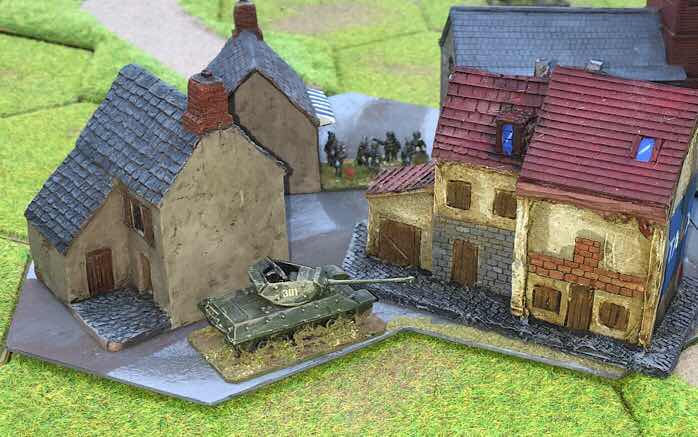 Our reporter, the ever watchful Monty Bartholomew Slackjaw Smythe has managed to get a photograph of the give-away activity, with his pride and joy, the latest Kodak loaded with the new fangled colour film - if only they could ever invent a camera that showed the pictures on the back of it and had a way to send pictures magically instead of by carrier pigeon laden with a 35mm film cartridge strapped between it’s knees.

Speaking to Marty Trenchfoot, the author of ‘German Field Tactics and What To expect Next’, it is  almost certain that a pre counter-attack artillery barrage will be inbound shortly and that Slackjaw and his pigeons will certainly be busy keeping our readers appraised with a full account of the action.