Ambush of a T-70 Company

A 'snapshot' post taken from the boardgame, Platoon Commander Kursk, by Flying Pig.
We interrupt turn 3 of scenario 7: 'Every Available Stuka', to dig into a slice of action. 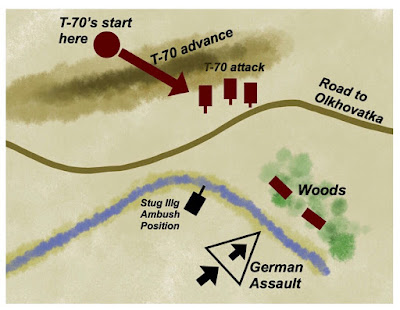 Viewed by Storyboard.
Operation Citadel (Kursk) had been in full and desperate momentum for five days. With intense fighting on the rain soaked and muddy battlefield, casualties had been horrendous and the men were exhausted. There were some commanders who were already privately thinking that the offensive should be called off, but for 2nd Panzer, the task on the morning of 10th July was to ensure another day of bitter fighting with the objective of breaking through the enemy defences and securing the Olkhovatka road.

The Panzer III’s on the right hand side of the panzerkeil, together with halftracks carrying pioneers, peeled away, turning eastwards towards nearby woodland, the last Soviet defensive position that blocked access to the road to Olkhovatka.

The Panzer III’s halted 300 metres short of the woods and furiously pumped high explosive shells into the Soviet positions, while the pioneers dismounted their vehicles and moved forwards, preparing for their assault.
Immediately to the north, Captain Ivan Sokolov, company commander of three platoons of T-70 light tanks, had been hiding on the reverse side of a small rise in the ground, with orders to attack as soon as the Olkhovatka road came under direct threat. That time was now!

With the Germans fully preoccupied with their assault on the woods, Sokolov intended that his full compliment of ten tanks, including his own command vehicle, should break cover and take up firing positions against the German left flank, disrupting their assault.

As the little T-70’s darted forwards to bring the enemy Panzer III’s into their gun line, suddenly the first T-70 violently exploded, followed by another. Sokalov, his tank hatch already open, desperately scanned the ground before him ... then he saw it, ambush! too late, his company was fully exposed.

Oberleutnant Otto Müller, had carefully sited his StuG III platoon of five vehicles, to give cover to the left flank of the German attack. His experienced crews had rehearsed and lived the art of ambush a dozen times. One after another, the T-70’s were stopped dead in their tracks, their numbers halved in an instant.

Viewed by system and game play
This situation came about because at this point in the turn, the Germans had mostly fired and moved with everything in that sector and so units were marked with Fire or Moved markers (in effect they are used). The Soviet side saw it as a good moment to be able to break from cover and try a bit of moving fire with the fresh T-70's to disrupt lead elements of the German attack towards the woods, safe in the knowledge that the heavier enemy tanks would not be able to respond because they had already been used that turn.

What of course they could not anticipate was that the German player had not one, but two action cards that allowed for opportunity fire to be made without regard for Fire / Moved marker status and in effect this gave the ‘used’ StuG III two lots of additional fire in that phase. Ouch!

There isn't a facing rule in the game and so to reflect the limitations of assault guns (the StuG III’s) which were turretless, they may only fire or move, not both. Here, the platoon had just moved into position and had a Moved marker placed upon them. The players Action Cards (no more than two allowed to be played in any given turn) in this instance are a good example of how the design deliberately introduces variables to ‘mix it’ for the other player. A player really cannot take anything for granted.

Of course there are other cards in the deck that could equally be used to strike out of the blue, such as Air Strike or Artillery attack. In this scenario, any artillery card played by the German player is converted to an air strike, as part of the representation that all Stuka sorties on this day were diverted to the break through attempts of the panzer divisions on the northern shoulder of the Kursk salient - hence the title of the scenario.

RESOURCE SECTION.
A detailed look at this game and an examination of the sequence of play was made in a previous post at this LINK.

My sister web space is the COMMANDERS page, which has more frequent postings than here and is more snippet based. LINK

https://commanders.simdif.com/
Posted by Norm at 13:31