In the last post (link below), I highlighted some rubberised wooden wall planking, picked up on a recent visit to a model rail shop, which instantly looked like it would be useful in lining the inner wall of a redoubt or trench and now, the deed has been done! ...... Redoubt No.1 is ready for action.

While at the hobby shop, I saw a single length of balsa wood, which was unusually cut, in what I can only only loosely describe as a ‘D’ shaped moulding. It gives a great starting form to get a revetment going, providing a flat edge for gluing to the base, a flat edge for the interior wall and a bevel for the the embankment, though I suppose, the more easily available quarter bead in softwood would work similarly well. A plastic base, some coffee stirrers and some filler and the build project was ready to go. 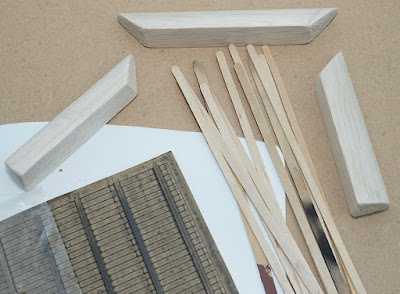 I commonly use 50mm wide bases for 28mm gunpowder era units, so the interior was given a width of 110mm, which allows two artillery or two infantry bases to sit within it, side-by-side. The outer length of the two arms were also cut at 110mm and angled out slightly.

The floor has wooden planking twin gun platforms, made from coffee stirrers, cut to 50mm lengths. It would be best (next time!) to leave a gap between the stirrers and the front interior wall, so that the wooden planking for the wall can have room to fully drop down into place, to make it easier to look like it goes below ground level. The base is shaped from ever useful plasticard. 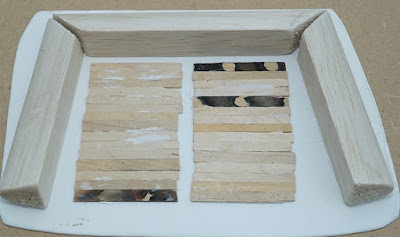 Once the basic structure is in place, dressing it is pretty straight forward. I used Ronseal wood filler for joints and rough basing, which is conveniently coloured brown, artists acrylic modelling paste to both basecoat and seal the balsa wood with a low texture and then an application of light and medium sand (mixed) onto thin PVA. 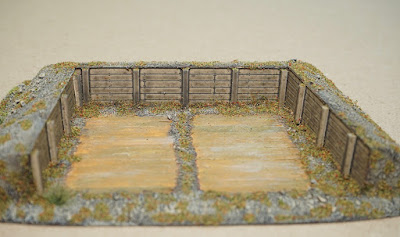 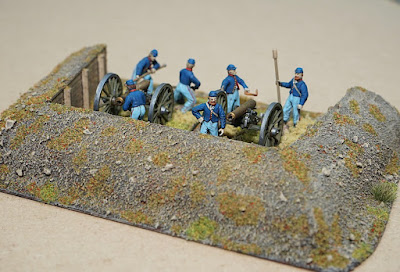 I was looking at a recently ploughed field today, already the rich black loam is being occupied by a blanket of seedling heads popping up on the flanks of the furrows, which I assume has nothing to do with the potato crop itself, so I reasoned that our earthworks, even if recently built, would also likely be quickly populated by a variety of hopeful green shoots poking out. 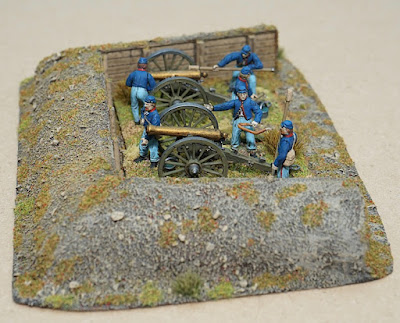 I was surprised that I didn’t need to put a 'mucky' wash over the work, probably because the Raw Umber undercoat was hard to kill with the dry brushing and so inking wasn’t necessary. A quick blast of mat varnish was used to give a final seal. The rubber planking looks the part (website in the Resource Section below) and has not had any inks or paint applied to it, except on the exposed top, where it was cut from the sheet. It is available in other sizes, so similar pieces can be scaled according to need. 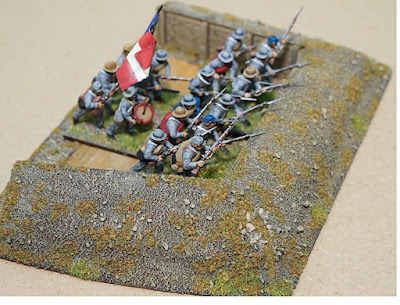 All-in-all, it looks rather good, even if I say so myself and is a piece that should prove useful across several periods.

Resources;
The rubberised wall planking has a web address on the packaging and is available in three sizes / scales. LINK
http://www.choochenterprises.com

Email ThisBlogThis!Share to TwitterShare to FacebookShare to Pinterest
Labels: terrain