City fighting in 10mm on hexes - Into Battle - WWII Tactical

It has been a while since the ‘pinboard’ city terrain made an appearance here. I have been looking at my ASL ‘Factories’ maps and thought it was about time that the 10mm troops and hexes hit the table.


This is just an 8 x 6 hex grid (Kallistra Hexon tiles), sitting inside a large pinboard, so it can easily be moved off the table if necessary. The last time I used a similar set up, I had tried to do a ‘big’ game with too many squads and in this ‘small’ space with my Into Battle - WWII Tactical rules, the system simply allowed too much firepower and within a couple of turns, each side had dropped to their morale break points, making for a bit of an unsatisfactory game.

I don’t think I need to change the game, but rather better appreciate the working parameters of Order-of-Battle size and strength v the size of the grid being used for used for any particular given scenario. A more constrained order-of-battle for the 6 x 8 works fine (based around my experiences with the multiple battles that fell from my Yartzevo Defiant campaign - see Resource Section) and frankly, probably fits in better anyway with most gamers collections.

The rest of this post gives way to a few photographs of the ‘at start’ positions, so is a lot less ‘wordy’ than usual articles here :-), but the intention in any case is to bring focus onto how much you can put into a small space and to highlight the old cityscape post (see Resource Section for the build).

It is 1943 on the eastern front, German forces have been pressing deeper into the city and yesterday took the Power Station complex. Overnight, the Soviets infiltrated an under strength SMG company into front line positions so as to counter-attack at first light and recapture the Power Station. 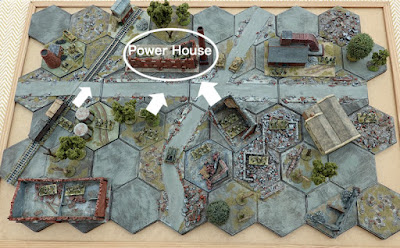 Immediately before play and right after set-up, the Soviet side are allowed to make two off-board heavy mortar strikes against German positions. The artillery spotters are placed at will, two target hexes are chosen and off board artillery strikes are executed as normal, including the accuracy roll and to see whether the player retains control over the fall of each fire.

Below - Soviet SMG units have gathered in and around the old and once proud Department Store, ready to cross the road and assault the Power Station.

On their left, Soviet rifle sections hope to use the railway embankment to infiltrate into the German positions.

The German left is protected by two rifle sections occupying the Fan House.

On their right, the Germans have a PAK 40 anti-tank gun nestled behind a low wall at The Pottery Kiln, which is supported in turn by a HMG. They don’t have a perfect view down the high street, but they can see to just below the crossroads near the department store on the north / south road, the expected route of any enemy armoured activity.

Two Panzer III’s have nervously advanced and taken position astride the main north / south road to check any enemy armoured attack that may travel up that road. They are about to be surprised by the lone SU 76, just a few hundred metres away, that has been lurking at the bend in the road.

This is the Power Station position and the view beyond as seen from the German position. Is the street about to be filled with infantry charging towards them with their SMG’s and do the Germans have enough firepower to deal with that?

Below - the game opens with the pre-game Soviet artillery fire brought in against the Power Station. The first module of fire is accurate and hits the Power Station, but the Fire Dice score of 1, 3 and 4 proves to be ineffective. The second strike is inaccurate and this in turn leads to the German player taking control of that strike and pushing it one hex away from their position, so that it lands on the main road.

The resulting cratering might both help and hinder an attack. A more suitable target may have been the pair of Panzer III’s or even the PAK 40 position.

Conclusion - The game remains to be played (back ache stopped play!). The scenario is intended to start at 0800 hours with the Soviets firing first and it will run for 60 minutes, concluding at 0900 hours, after which time, building occupation alone will determine the winner, with each hex of the Power Station offering up one Victory Point to the occupier, so it is possible to call a draw.

The lone SU 76 is not expected to last for long, but you just never know, especially if it knocks out or disables one of the PzIII’s with an opening shot.  At 0910 hours, there are planned Soviet reinforcements of 2 x T34/76 tanks, each carrying SMG riders and on their arrival, the Soviet Morale Level will be raised by +2.

At 0930 hours, an additional platoon of 3 x rifle sections are released to the Germans as reinforcements and at that time, their morale will be raised by +2.

It is only a throw down game, but if it broadly works, I will tweak it to firm it up and then write it up as an official scenario for Into Battle and make it available via DropBox, accessible from my Commanders webspace.

In the Resource section below, there is a link to an article as to how the city tiles were put together.

My sister webspace COMMANDERS is a bit more snippet based than here and lists some DropBox files relating to the Into Battle - WWII Tactical rules. Link.
https://commanders.simdif.com

The ‘how to build a city scape’ blog article LINK
http://battlefieldswarriors.blogspot.com/2014/09/building-hex-based-cityscape.html