Fake News - The Mystery of the Peculiar Rash.

We have a report from our man in the field that the devious Monty Bartholomew ‘Slackjaw’ Smythe has broken cover to attend the Hospital of Pestilence and the Unexplained, cunningly disguised as a dear friend to Lucky Larry, who was admitted yesterday for a strange skin complaint that was initially described as ‘interesting’, but is now understood to be super glue related.

Nurse Morphine Millicent, acting as spokesperson for the hospital, said that ham fisted modeller Larry, would not be in any discomfort while on her watch and was pleased to report that several items of a 1/72nd Tiger tank model kit had been successfully removed from the patients body and that both Lucky Larry and his model could be expected to make a full recovery.

However, in a turn of events, Doctor Danny Dry Brush, an authority on the gentle art of highlighting, has had to put out a further statement confirming that the hospital is fully investigating the claim that ‘Slackjaw’ Smythe was seen leaving the building while smirking and carrying plastic items that were suspiciously similar to the yellow Italeri hard plastic kit parts liberated from Larry’s person.

In a recent development, Slackjaw’s great friend and confidant, Tommy Twoface, for the princely sum of £5 and a pickled onion, has disclosed that ‘Slackjaw’ Smythe has this weekend been gleefully working on a 1/72nd Tiger I fast build model from Italeri, that he had only very recently acquired from a ‘friend’!

While it has always been difficult to prove Slackjaw’s involvement with anything bigger than the 12mm scale, we feel we are getting closer to the truth.

Only moments ago, Heartbreak Harry, who has been temporarily distracted by the charms of Madame Divine, contacted this office, having recovered a business card from a diorama of a Tiger model and a tatty factory, suggesting shenanigans that clearly point the finger of suspicion at the illusive ‘Slackjaw’ Smythe.

Is the net finally closing?

Further evidence of Tiger 224 on the prowl at a farm - somewhere, has Professor Rivet casting some doubt on the whether in fact Slackjaw Smythe did have a hand in any of this at all!


Any comment in the Gazette's letters page below will automatically be entered into an ‘out of the hat’ fake draw, with the winner probably receiving a £10 Amazon gift voucher. Closing date is midnight (GMT) 30th September 2019. Just a token of appreciation for all those that indulge these pages and support the Blogosphere.

EDIT - With great ceremony and much merriment, a 'pulling the name from the hat' party was held at my place, I am pleased to say that Lee from the enjoyable 40mm based 'napoleonic therapy' blog has won the £10 Amazon Gift Voucher. Link to his blog http://napoleonictherapy.blogspot.com

Thanks to everyone who posted.

EDIT - I have calmed down the rust on those exhaust shrouds! 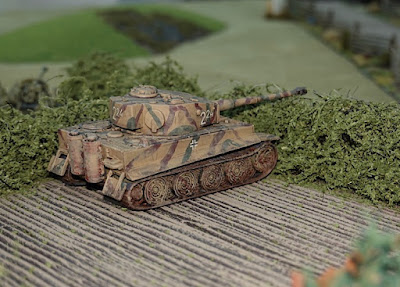