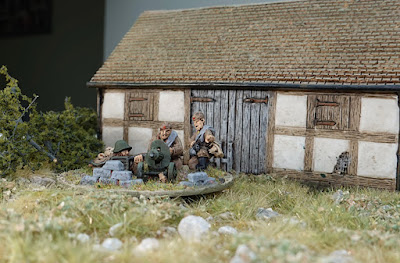 The blister pack comes with three figures and a five part machine gun that goes together very easily, plus a round 60mm plastic base. 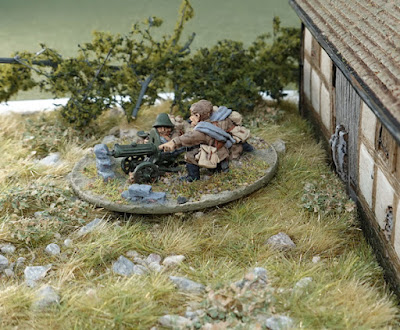 The figures were given a hot soapy wash and primed with a Rustoleum primer, block painted, washed with a slightly diluted Vallejo Umber wash and then minimal highlights were put back in. For the first time that I can recall, I have not put highlights at all into the face. I think the overall muted effects are in keeping with the subject. 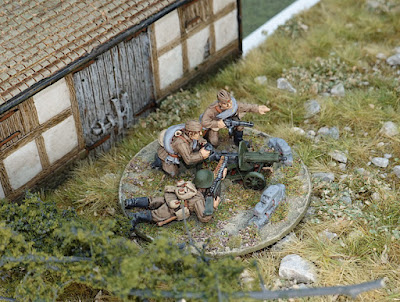 Finally a short blast of matt varnish while on the painting sticks and then a second light coating once based, to secure the base material and add extra resilience to those parts of the figures that will get handled. I have tried to keep the base a bit ‘nondescript’ so that it can fit in with a variety of settings.

If you are impressed by the base mat .... I have not gone posh! it is just a modellers bit of matting that cost £15 for just a 6" x 9" piece, great for photo shoots, but it would break the bank to start covering the table.

Good undercuts make the painting pretty straight forward and a ‘wargaming standard’ is easy to reach. The only problem that I had was that the gunner’s hands did not align with the gun trigger. I should have done a dry fitting run, but I glued the gun to the base before priming. The elevation of the gun is perfect for the ammo belt feed, but not for the gunner to keep his knees and boots on the base AND hands on the piece. I have checked photo’s on the internet and other examples seem fine ..... so it must be me! Overall though, a nice piece.

I have the building in both HO scale and N Gauge, with them being a model railway pieces, so I took the opportunity to take a shot of my Pendraken 10mm Maxim.

This has made me think about revamping my 10mm stuff and be a little more inventive with the bases.

I also thought I would break open the 1/72 Russian Support weapon box from Plastic Soldier Company and build that Maxim for comparison. Anyway, it was fiddly, then a bit fell on the garage floor and it took ages for me to find it, then the arms / mg / base combo just wouldn't behave for me, then I pressed the gun shield on while the glue was still drying and everything collapsed. Giddy with glue fumes, I swore loudly and the bits are now in the bin!
Posted by Norm at 14:35