Shermans on the Pinboard

The recently painted N.W Europe 10mm U.S. Battlepack units from Pendraken have been yearning to make it to the table and get into action and so here they are. 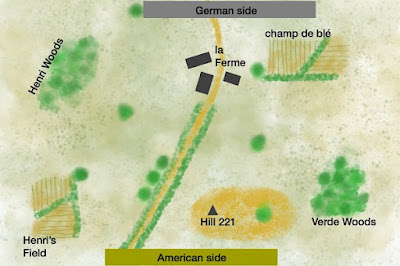 It is late August 1944 and an American force is attacking small farm based hamlet held by a platoon of Volksgrenadiers with A/T gun support. This is a small action that I am using to look at converting my Into Battle - WWII Tactical rules from hexes to an open board.

The game is confined to a large pinboard (34" x 22"), converting hexes to 10 centimetres per hex.

This is a first attempt at this and so just to initially identify any problematic areas for conversion, I am keeping things simple, this is just a head-on assault against the hamlet. 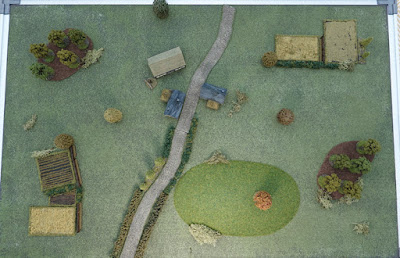 For Volksgrenadiers, I have gone to the (The West '44 to '45) module, which give Volksgrenadier troops a reduced fire ability at 2 hexes and beyond, with their NAF reduced to 1D6, but when firing adjacent and in close combat, their high proportion of automatic weapons gives them a NAF of 3D6. Further, I have reduced their command radius down, though it mattered little here, as everything in the hamlet was still within command range.

German set-up. Each building got an infantry section. In addition, the building on the front right got the HMG. Two Pak 40 anti-tank guns were deployed on the flanks, one in Henri Woods (left) and the other at Champ de blé (right)

I decided the battle would start at 0900 hours and last for 1 hour. The Americans must capture at least two of the buildings to win. German morale starts at level 3 and American morale at level 5.

0900 hours.
First blood is immediate, as the Shermans enter the table, the vehicle on the left is hit and knocked out by the Pak 40 tucked away in Henri Woods. Fortunately for the Americans, it did not retain its fire and is marked (used) with an Opportunity Fire marker. 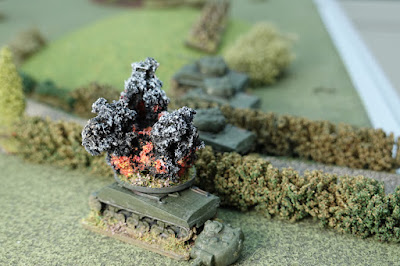 0909 hours.
Very bad! another Sherman is destroyed, this time from the Pak 40 over at Champ de blé. It does also however fail to retain it's fire and is marked OP Fired - a situation then made worse when it then becomes Out of Command, which means it will not be able to remove its limiting OP Fire marker this turn. 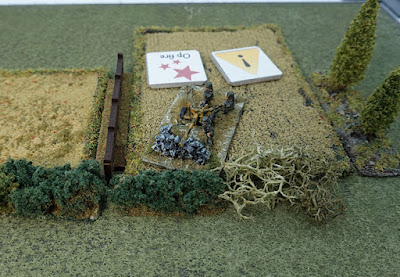 HMG fire from the hamlet opens on the exposed American infantry on the high ground, pinning one section. This already looks a tough one for the Americans.

0911 hours
The advancing of the game clock results in both sides getting random events, which are applied. The German HMG causes the loss of an infantry section at the hill and the Germans do well this turn, recovering quite effectively from their Pin results.

0922 hours
On the American left, the infantry heave reached the far field boundary and their .30 cal opens up on the Pak 40 position at Henri Woods, destroying it.

0927 hours
The Americans are unlucky to suffer with a goodly proportion of their force going out of command, however, that is somewhat countered by poor German fire.

On the left the American infantry prepare to move out from Henri's Field towards the hamlet, covered by the .30 cal.

0932 hours
The action is hanging pretty much in the balance. On their centre / right, things are held up and regretably exposed, though on the left, the .30 cal removes a German section from the front left house, forcing German morale to drop to 1.

The German HMG removes another American section at the hill and American morale also drops to 1. This is very tight.

0951 hours
Guns continue to blaze, but the Germans make the first breakthrough, they decimate the infantry at the hill and American morale hits zero. This causes everything to check their morale, failures cause a fall back. This sort of thing can dislocate a defence or cause an attack to lose its momentum.

An infantry section and a Sherman lose their nerve and pull back, but enough of the attack force remain in place for a feeling of 'just one more push should do it'.

The German HMG crew dash across the lane from the house on the right to get into that now empty front left building, but they are caught in the lane by Sherman fire and are pinned.

0955 hours
The remaining two Shermans continue to fire into the lane and the weight of fire overwhelms the HMG team, causing the German morale to crash to zero. The German units all make their retreat tests. The section that had been sharing their building with the HMG have had enough and they flee through the back door.

There is now just one section holding the hamlet.

1001 hours
An hour of game has passed and so the scenario concludes. The German have managed to hold out, or rather the Americans have failed to get a toe-hold in la ferme.

Conclusion
That all seemed to go rather well and again a load of action falls out of a small gaming space and relatively small order-of-battle.

This test game has made me more inclined to do a hexless version of the rules. I shall add it to the list of things to do :-)