Recently at The Works (a UK high street stationer) I picked up Panzer Ace, the memoirs of an Iron Cross panzer commander by Richard Freiherr von Rosen, published by Greenhill Books, in the remainder section for £8 (hardback). 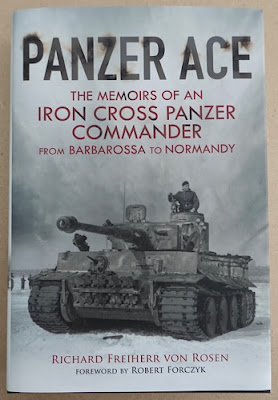 It is an interesting read, full of the sort of detail that the gamer and scenario designer will find useful and is ideal for just snatch reading and browsing for anyone who is time poor.

Anyway, I came across a photograph of a scene that contained elements that were currently on the painting table and so the idea occurred to loosely re-create the photograph, so that the new toys could have a ‘parade’.

Please use the. ‘read more’ tab for the rest of this post.


On page 208 there is this black and white photograph. 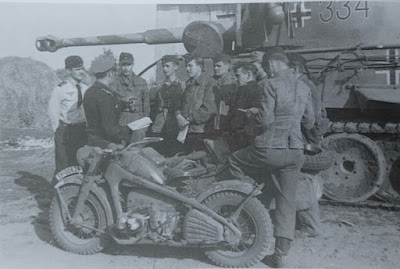 The caption reads - The issuing of orders to Tiger 334, a Zündapp motorcycle combination of the company with field-post licence in the foreground.

As chance would have it, I have recently completed one of the 1/72 scale Tiger I models from the Italeri quick build series kits for wargamers. I also already had a completed Zvezda 1/72 model of a motor cycle combination that just needed painting. Look at the dog chasing the motor-cycle on the box artwork, a fun touch. 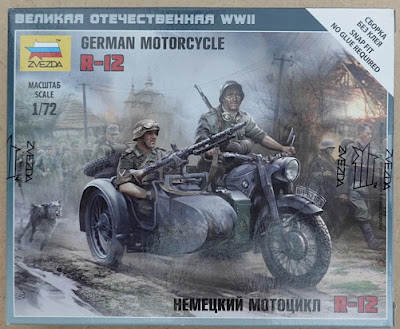 The idea of putting together a matching scene occurred. The real photograph has some personnel in discussion, so a dig into the plastic sprue mountain re-discovered the Zvezda German H.Q. box, which just contains 4 figures, an easy and worthwhile opportunity to make the scene complete, especially as I will likely be needing a command base anyway. On the box, it looks like the boss is well fed, has the best coat and stands back and looks on, half interested while others do the work! more artist fun perhaps. 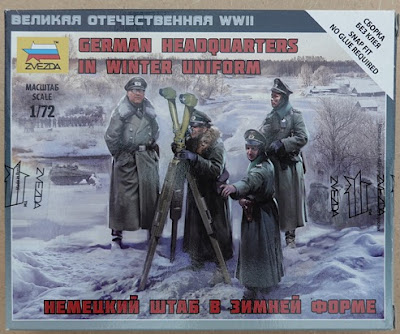 Tiger Model - This was a straight forward build, but I ended up with a gap on the hull, which I fixed up with some old and sadly a bit dried out Green Stuff. The kit has transfers, which is a bonus, as a lot of fast build kits don't, so we get tank 224, while the real photo is 334. 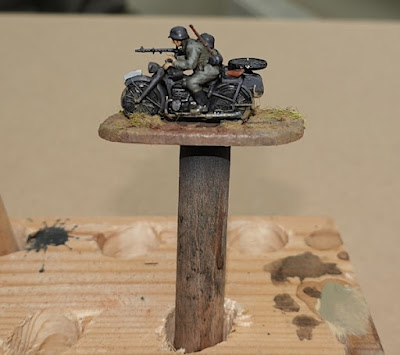 Motor Cycle Model - The parts are small and so it was a slightly fiddly build for my banana fingers. I couldn’t get the machine gunners right shoulder to fit to the body properly, so Vallejo Putty tinted with paint came to the rescue. I went for a base coat of Vallejo Anthracite Grey, so that the machine could be used throughout the war. 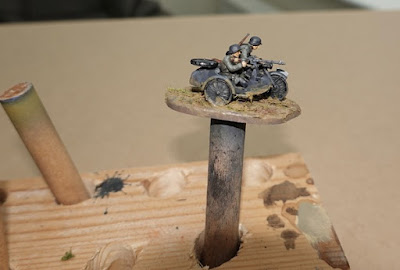 The Zvezda HQ box has four officers around a Coincidence Rangefinder, with one officer actually looking through the scope. I felt that four figures were a bit crowded, so I dropped the viewing officer, but left the rangefinder.

The look of the HQ stand has an animation style of relaxed discussion, perhaps they are not too close to the fighting! 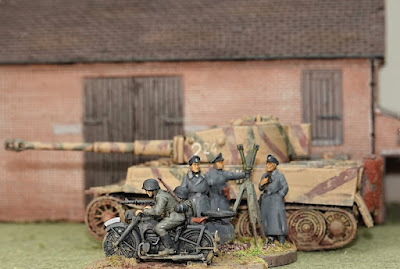 The final collection of three 1/72 models were placed to represent the original black and white photograph. 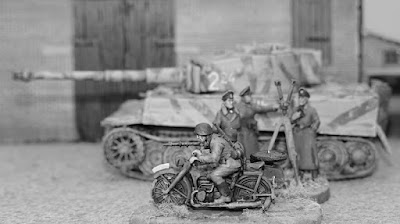 Then it was de-saturated to bring the same sort of Black and White feel as the original.

Anyway, a bit of fun.