The last post looked at a small ACW action with Archer’s brigade attacking Cutler’s Brigade at Gettysburg (see resource section below for the link). The tabletop action had been generated from a situation that fell out from the playing of a boardgame. 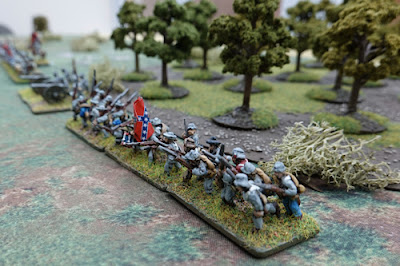 The boardgame was taken from Volume 1 of Battle Hymn by Compass Games, which includes the battles of Gettysburg and Pea Ridge.


Today we are using a 4’ x 3’ space with Black Powder rules and helped along by the Glory Hallelujah ACW supplement from Warlord Games. The figures are 12mm Kallistra with units representing regiments and having a frontage of 120mm.


please use the ‘read more’ tab for the rest of this post.

This is a simplified graphic of the table. 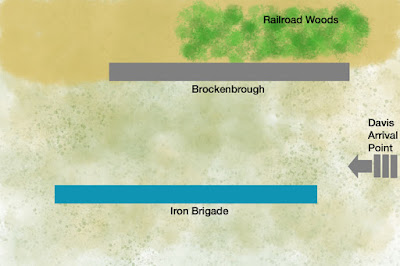 Victory - This is based upon the destruction of the Iron Brigade as a viable force. The side that first destroys any three enemy units wins the game. If by the end of the game a winner has not been decided, then the Union will automatically win as we assume that they made a successful fighting withdrawal.


Setting up. Brockenbrough and the Iron Brigade start the game on the table roughly in the positions shown on the above map. Brockenbrough sets up just within three moves of the Iron Brigade, so that it could potentially (just about, under BP rules) charge it on turn 1. Meredith has to set up with an exposed right flank i.e. he cannot anticipate that his flank is about to be threatened. The regiments that form both lines are set up in a random order, including the artillery. Each side can put 1 regiment to the rear (centre) in reserve.


Davis will enter play randomly during the game from Turns 2 to 4 inclusive. At the start of each turn from Turn 2 onwards, roll 2D6, if the score is greater than 9, then Davis will arrive that turn.

Add +2 to the dice score if at least two of Brockenbrough’s regiments made at least 1 full move forward in the previous turn and on Turn 3, add another +1 if it failed to arrive on Turn 2. When the brigade arrives, randomly select the order of march.

If Davis has not arrived on Turns 2 or 3, then it automatically arrives at the start of Turn 4.


Below - This is a reminder of the boardgame situation that  inspired this scenario, we are playing the right half of that situation. 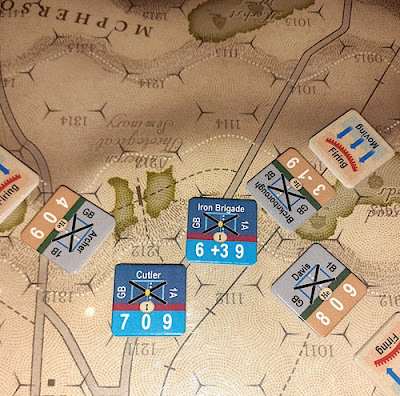 Admin.
The Confederates are the attackers and go first.


The fight will last for no more than 6 turns.

Note - taking the points system used by Glory Hallelujah, the combined Confederate force is worth 544 points compared to the 357 of the Union, but 130 points of the extra Confederate value is accounted for by the extra Confederate leadership (Heth and Davis), though Heth, their Divisional Commander, may end up leaving the battlefield early - see Special Rules.


Thanks to fellow blogger Vtsaogames who sent me some information about Brig. Gen Davis.


Special Rules.
Ignore ‘brigade broken’ rules. Instead, a side simply loses the game the moment they have lost their third unit.


All distances are converted from inches to half inches.


If a unit takes more than one move, it cannot then also fire in the subsequent Fire Phase.


Ignore any defensive value the ridge might have in your rules - we don’t want the Confederates to take a defensive stance!  You don’t even have to put the ridge on the table. The woods are treated as light woods.


When Davis’ Brigade arrives, it is automatically commanded and arrives in a single column of lines. On the turn of arrival it is only allowed a single order/ move, which is just enough to get the brigade onto the table. The lead (front) unit will be able to fire in the subsequent fire phase if the situation permits.


Confederate Divisional Commander. Heth enters play with Davis’ brigade. Once Heth is on the table, roll 2D6 at the very end of each and every turn for him. On a score of 11+, Heth takes no further part in the game because his attention has been drawn to the nearby engagement between another of his regiments (Archer) and Cutler. Add the current turn number to Heth’s dice roll, so Heth becomes increasingly likely to leave the battle as the game plays on.


Opening Action.
In an effort to increase the chances of Davis arriving on Turn 2, Brockenbrough orders two regiments on his left to advance one move, which has the benefits that each of the units will have brought the enemy into rifled musket range, they can fire and they cause that significant +2 to be added to Davis’ arrival die roll on Turn 2.


Meredith has put four regiments and the artillery into a strong front line, while keeping 24th Michigan in reserve. On his left, he overlaps the Confederate flank, so he orders two regiments from his left to advance and engage in fire.

The Iron Brigade is very strong in this game, the Saves die roll and unit Stamina are both improved and a unit has a chance (5+) of removing a Disorder marker at the START! of their turn.

Regardless, the two advancing Confederate regiments on their left, together with artillery support, inflict 2 hits and a Disorder result on 7th Wisconsin (Union). Overall, some shoddy return shooting saves the Confederates from some discomfort.

On Turn two, Brockenbrough, closes his eyes, blows on his lucky dice and just hopes that Davis will arrive on the enemy flank. Oh Dear! 7 rolled, plus the +2 for advancing regiments in turn 1 equals 9 and Davis only arrives on 10+. This is bad news.

Brockenbrough guides the two advancing regiments to concentrate their firepower on 7th Wisconisin (Union far right). If Davis arrives next turn, the Confederates will massively out number their enemy at this point and can roll up the line. Overall, another turn of poor shooting.


Mid Game.
On Turn 3, Davis again fails his entry dice roll, bad, bad, bad!
7th Wisconsin now have 3 hits and a Disorder and Meredith orders the reserve from the centre to move out and support his right flank ....... it doesn't receive the order!

On Turn 4, Davis arrives automatically, having wasted precious time. 40th Virginia, one of Brockenbrough's lead units on his left, tries to make up for this by charging 7th Wisconsin, who look vulnerable.

But they break themselves in the process and flee, though 7th Wisconsin are left shaken and disordered. Again Meredith, seeing the plight on his right as the Confederate reinforcement arrives, orders the reserve to support his flank and again the order does not get acted upon!

There is small consolation for Meridith as 2nd Virginia on the far Confederate right, break and flee due to the volume of unrelenting fire from Meredith's advanced left wing. This is the second Confederate unit lost and game tension increases.

Divisional Commander Heth fails his end of turn test and leaves the battlefield to attend to another crisis developing elsewhere.


End Game
Davis orders his brigade column to charge into the open flank of 7th Wisconsin. Against all the odds, the 7th hold on and at last support from the centre arrives.

But the fighting here is very intense, with very significant casualties to both sides and having given more than could be asked of them, 7th Wisconsin finally gives way and leaves the battlefield, though so too does 55th North Carolina who were engaged against them, absorbing high casualties as the lead attack unit. The 55th becomes the third Confederate loss and so the Confederate attack is called off and the game ends in the Union favour.


Conclusion
The extra nuances in this game brought some additional interest to the head on local clash of the previous game. Davis is a potentially dangerous threat to the Iron Brigade, but his lower Command rating (7) tempers that threat to some degree, especially as Meredith has a Command Rating of 9, so finds it much easier to react while the armies are still disengaged.


Under the new rules in BP II, Heth, the Divisional Commander can help Davis with a re-roll of the command dice, but with Heth destined to leave the battlefield for other pressing matters, Davis may soon enough find his limited command rating to be a liability, especially when trying to rally his forces to keep them in the game.

As it happens, today, Heth did leave play early, but Davis was still the dice king and able to put his important charge into the enemy flank.

The three problems for the Confederates were;

1) Brockenbrough abandoned his right to concentrate on his left. The result was his right just stood there and got mauled.

2) 40th Virginia charged without supports, on a bit of a gamble and this failed, resulting in the their costly loss. Had they won, they would of course have been great!

The issue for the Union was that their reserve failed to support the flank twice and it was just good fortune for the Union that their regiments are so good, that the 7th Wisconsin managed to hold on as long as they did, otherwise an earlier arriving Davis would have been pushing into the flank of the Union centre.

The scenario is simple, but offers the potential for quite a bit of variety for replay and does bring some tense moments. One to return to I think.


The opening post that explains the background to this set of battles. LINK