This is a three turn scenario from Hexasim’s Eagles boardgame package that covers the Waterloo battlefield.

Starting at 11am, with hourly turns, the French will win an instant victory if they capture the farmhouse. If this is not done by the end of the game, they will lose, unless the ridge behind Hougoumont is controlled by the French, in which case a draw occurs.

The farmhouse is fortified and a tough nut to crack in the game. The gardens, orchard and light woods around the farmhouse are all represented by orchard type terrain.

I am using the most recent rule set (from the Quatre Bras module), including the rule that caps a stack's strength points at 20 if made into or out of non-open terrain. 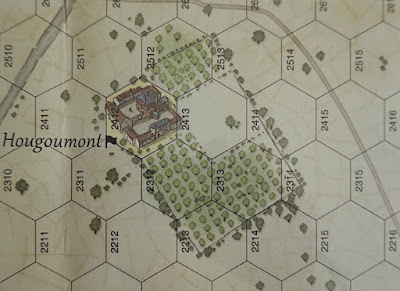 And so it begins

The French open up at range with their guns, without making much impact. Reille with so many men at his disposal is impatient and immediately launches infantry attacks to overwhelm the defenders in the orchards.


12 noon
The British continue to hold ground while taking very heavy losses. French guns are brought up within 400 metres of the farmhouse. Reille’s divisions are pushing deeper into the orchards, where they attack Kühlmann’s horse artillery, who lose half their guns before falling back a short distance to maintain alignment with Hougoumont's flank.

Alone, Kühlmann’s guns are vulnerable and cheers suddenly go up from the gunners as 2nd Nassau (counts as a British formation in this scenario) come down from the crest at the rear of the farmhouse and form up with the guns.

Heavy French artillery batters away at the Farmhouse, causing very heavy casualties amongst the Guards, but their morale holds up and they keep hold of the farm complex.

As the British perimeter shrinks, the French started to envelop the position and put in their strongest attack yet, attacking from three sides, but Kühlmann‘s artillery fires canister driving off 100th Ligne, while at the farmhouse, robust fire from The Guards causes 2nd and 92nd Ligne to rout.

The fighting is growing in intensity - can the British hold on?


1 PM - A last push!
The assault is seeing Reille's entire Corps getting drawn into this cauldron, but surely one more push will do it!

Kühlmann‘s artillery becomes overwhelmed, having seen off 72nd Ligne, they are immediately counter-attacked by 100th Ligne and the gunners are lost. The farmhouse now stands in defiance ... alone.

The Guards manage to repel another assault and then another! but with both sides exhausted, the fighting dies down around Hougoumont, however any hopes of sustaining the defence for much longer diminish as 1st and 100th Ligne push 2nd Nassau off the ridge behind the farmhouse. The French take the ridge and Hougoumont is now isolated.

Conclusion - British losses have been huge, 6 units have left the map and only the battered 2/3 Foot Guards remain - demoralised! But French losses have been equally significant, with 2 units routing, 1 unit flipped and 5 units lost.

Though the French have failed to win the scenario, they can claim a draw due to their capture of the ridge.

With such a close ending, I of course felt compelled to see what a fourth turn would bring, and this saw the collapse of the British position at Hougoumont. Playing this extra turn just shows how tight the scenario is. It makes for a good intro scenario, but is also an interesting mini-game in it’s own right.

The full Waterloo battle now begs attention!
RESOURCE SECTION.
Commanders is my sister site, which is a bit more snippet based than here. LINK
https://commanders.simdif.com/
A previous post covers the STREETS OF LIGNY and has an AAR and description of the game mechanics. LINK
http://battlefieldswarriors.blogspot.com/2018/02/the-street-of-ligny-1815.html
Posted by Norm at 17:56