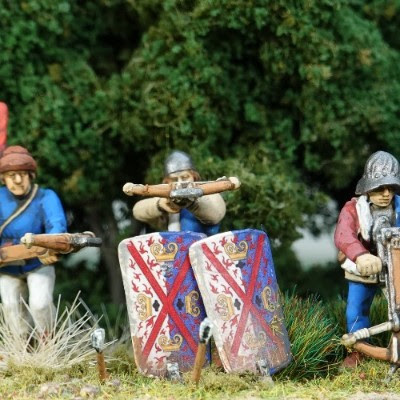 Those lingering quiet thoughts of how to base for my Wars of the Roses project are now having to give way to practical application as figures start rolling off the painting sticks.

I have been running some test games with Never mind the Billhooks (free rules from wargames Illustrated) and Sword & Spear (from Great Escape Games), each time putting a few representative figures on 80mm bases, with a base equalling a single unit to see how that might work and so far, as a compromise for the smaller table, the basing is working out okay.

It is now time to actually create a couple of permanent bases to test out the practicalities of look and function. So far, two units have been put onto 80mm bases, a mercenary crossbow unit, based at 50mm deep to represent a skirmishing unit and a retinue bill unit based at 60mm deep. 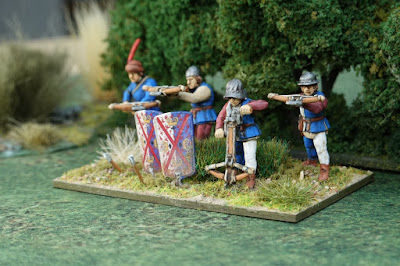 The crossbow are Perry plastics from their mercenary box and have been done in Burgundian colours with just four figures to the base (in Never mind the Billhooks rules, a skirmish unit has 6 figures). Pavises and a couple of arrows stuck in the ground have been added to help dress the base and give a little more bulk.

I tried hand painting the pavises. It was a brave attempt, I wept, swore, gave up wargaming forever and then ordered the rather fab decals from Steve at Little Big Man studios - it seems to have taken me too long to ‘discover’ these! 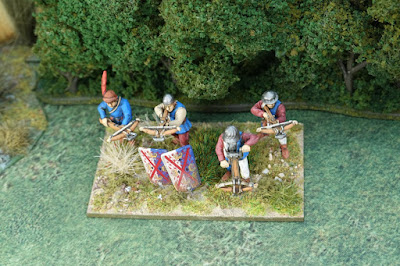 Anyway, I think they turned out rather well and will eventually sit nicely in the front of the pike unit that will be representing the French long spear contingent at Bosworth.

For the billmen, we have Perry plastics from the basic WotR infantry box, providing a retinue bill unit for Lord Clifford, a Lancastrian contingent from 1460. The base takes 10 figures that closely resemble two lines but are placed to show a little bit of depth and the disorder of closing to action (Never mind the Billhooks use 12 figures in two ranks, with casualties removed as individual figures). 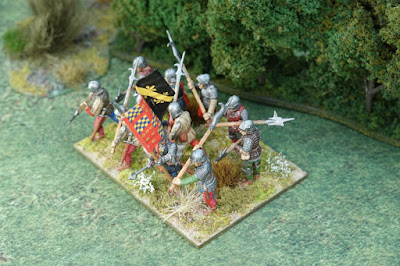 The Lord Clifford’s flag is from the Perry plastics box and I have only just realised that there are different flag sheets spread amongst these same plastic boxes. This box has the Wakefield 1460 flag sheet and I know from amongst my other boxes, I also have Towton and Bosworth flag sheets, what a great idea. There was also a bit of room left at the back to fit a single 10mm die holder, which will no doubt become useful and I should have thought about that for the crossbow base. Perhaps my friend ‘The Dremel’ can correct that! 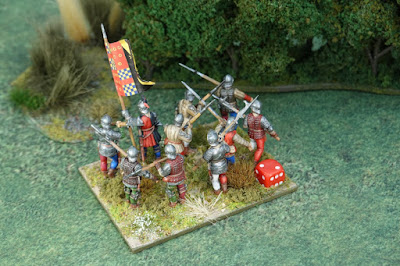 As an aside, I have also been trying some different varnishes. The crossbowmen are done with a matt spray varnish from a rattle can (Winsor & Newton professional), which is very flat and the helmets and metal bits needed repainting afterwards. The billmen were sprayed with Vallejo satin varnish from a cheapo airbrush and the satin did preserve the armour better without adding too much sheen to the clothing. 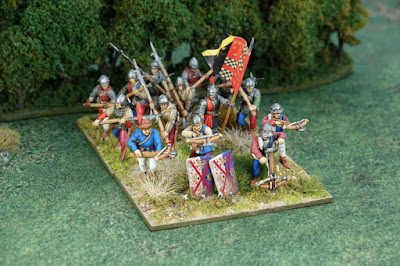 Next sitting on the painting sticks I have a retinue body of archers to add to Lord Clifford’s force. I will probably just use 7 or 8 figures on that to distinguish their function from the melee bases. My Bosworth army commanders (Richard III and Henry Tudor) and associated standard bearers have had their primer and beg for some early attention.

Anyway, the next game will have a couple of ‘real’ bases to help evaluate whether 80mm single basing is the way that I want the project to go ..... and hoping that they survive all through the game and have lots of victories as the tough nut, posh units of the army!

Here is a Wiki link with a bit of information about Lord Clifford. LINK