No .... not a rufty tufty old bruiser with a sharp pointy stick thing! Rather, this post is all about cramming a wargame world into a single small box. “Impossible” you shout, “I’ve done it once before” I cry.

But of course that was then and this is now! So a harder task for sure, but this is a post that tickles the fancy of this blog’s roots of ‘wargaming in small spaces’, a gaming sentiment that I know interests a goodly section of the audience, who are either currently practising the dark art of gaming in small spaces or knowing that they soon might be, with plans of down sizing.

So if you are interested in a concept of down sizing to a single case / box, please use the ‘read more’ tab for the rest of this post.

A mix of modern life and the ground work needed for getting a game to the table can often be a barrier to actually getting to the heart of the matter ....... gaming. Then we have storage and gaming area restrictions, plus other impact factors. At the moment, my constant companion - a bad back, is giving me grief and the only gaming I can do this week is being seated at the table with the game right under my nose and no stretching! So we can certainly add mobility to the list of practical obstacles to ‘bigger table fun’.

Boardgames very obviously fit the bill for me at the moment,  but what of the delights of a figures game?

A few days ago, my mind was transported back in time (I promise this is not a nostalgia story) to my mid teens. Money wise, times were fairly tight for most families that I knew, so there wasn’t a lot of cash about for us to indulge to anything like the degree that almost seems the norm now if our magazines and blogs tell it right.

That actually left us fairly content with what we had or at least at ease with the reality that that was the situation, a case of ‘this is how it is, so get on with it’ and so consequently collections of anything were typically small and treasured.

I had a ‘few bits and bobs’ for my wargaming, so much so that pretty much the entirety of it could sit in a fairly small tatty old fashioned suitcase that my Grandfather had given me. In fact, to rather prove a point, in those days, I wouldn’t think ‘tatty’, it was just a personal space to me, which perhaps is just another indicator of how our mindset between then and now has changed. We don’t want to do tatty now!

Anyway, the point is that all of my wargame world at that time lived in the case, but that still gave gaming that was powerful enough for it to become the cornerstone to a life-long gaming passion.

So what was in the case of mystery? Well, other than some Grant / Featherstone books that I had on the bedroom bookshelf, I had just two working sets of rules in the case, these being Wargame Research Group Ancients 6th edition and Micro Tank Warfare (WWII) rules from Leicester Models - the latter needed teenage eyes just to read the gun penetration graphs!

The WWII forces consisted of a small tray of 1/300 micro tanks and infantry, bought locally as singles on a pocket money basis, with some small batches also ordered direct from Heroics & Ros, when a teenanger without a bank account could get a Postal Order from the Post Office. The ancient armies used Airfix Romans and Ancient Britons.

For terrain there were a few trees made from matchsticks with cotton wool glued to them and dyed green with watercolour poster paint and a hill made from stiff cushion foam, cut into decreasing circles and stitched together. A bag of fine railway modellers ballast was used to make roads and collected up again after the battle and that was it really.

There was a green cloth for the battlefield, but I suspect that sat on the suitcase, rather than in it. Anyway, there you go, enough stuff to see many battles and pass many happy hours at the table.

So with the scene set for the wargame in a suitcase and with me wanting to get a bit of gaming done at the table, I have had a lot of fun over the past few days re-creating the wargamer’s suitcase, using a similar sized box and so here we go. 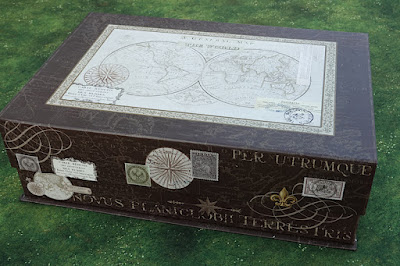 The rather snazzy cardboard box has an interior of 17” X 11½” and a depth of 5” and so is a fair representation of the small suitcase. 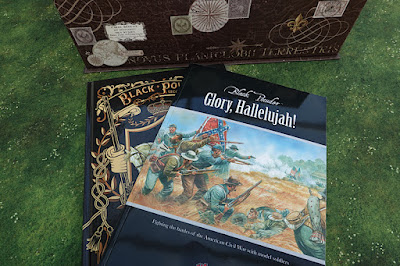 First in are two hefty rule books. The rather weighty Black Powder II and its ACW supplement ‘Glory Hallelujah’. For the small game, I will cut measurements down, converting inches to centimetres.

I should say that these battles will take place on my textured large pinboard, which is 34” x 22”, so just under a 2’ x 3’, so the forces can be used in this space and still have a little room to breathe. 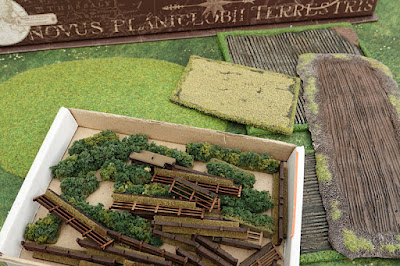 Next up, a small hill (S&A Scenics), some latex fields (TimeCast) and a resin field (The Baggage Train), MDF fences (Battle 4Ground) and some home made hedges. 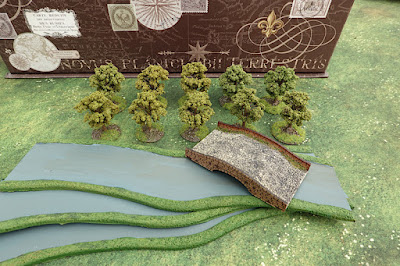 Then some latex river sections (TimeCast), a set of 10 trees (S&A Scenics) and a small MDF bridge. 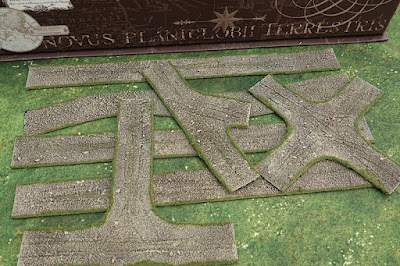 These are the thinnest roads I have (Fat Frank on e-bay) and they scale nicely on a pinboard area. 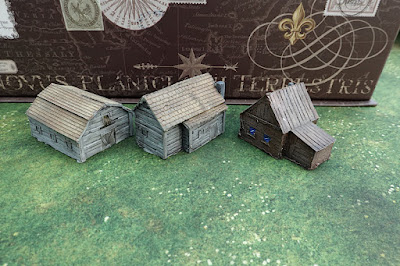 Three buildings will be more than enough on a small board. These are resin wood plank buildings (Pendraken) that come as pre-paints. 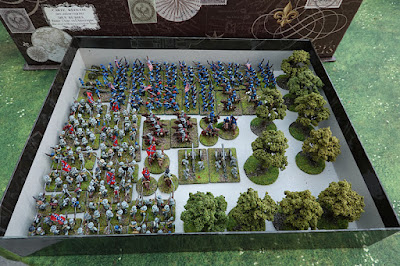 Finally, the armies. I am keeping these within the limits of what I have previously described as ‘Pocket Armies’, so the Confederates have 8 infantry regiments (each with an 80mm frontage), 1 cavalry regiment and 2 guns, plus 3 command stands. The Union mirror that. These are Kallistra 12mm figures. There is enough room left in the tray for the trees to be given a safe space. 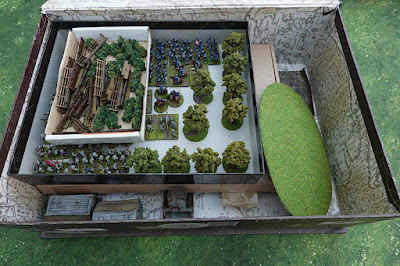 And this is what the box looks like when packed. There is a bit of space left for some dice, the tape measure and a small bag of lichen (Woodland Scenics).

Well, that’s me, all posh, dressed up and ready to go. Does this in any part resemble my teenage suitcase? yes and more. Even in 2020 there is enough in there to give an admirable sentiment of proper wargaming with a fit that is friendly to both gaming / storage space and budget. And who knows, even something like this as a gift to the right person might be the lift up that they need.

I think if I was to add another item, it would be the One Hour Wargames book by Neil Thomas, just for those 30 scenarios that are designed for a small space and 4 - 6 units per side.

Now to get some of this to the table. I feel the Action at Snake Pass Creek beckoning!