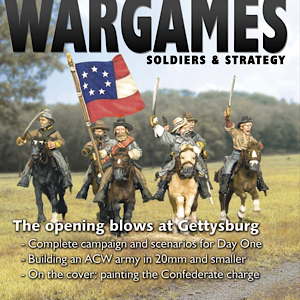 Having just completed the Wargames, Soldiers & Strategy survey, I happily spent my ‘thank you’ voucher on WSS issue 66 as a PDF download, an issue that gives special focus to the first day at Gettysburg and a superb read it is too.

The first day has always interested me and magazine contributors Mike Evans and Don Effingen, provide 7 linked scenarios that cover the first day of fighting. Scenario 3 covers the fight over Herbst Woods between Archer’s Brigade and Meridith’s Iron Brigade.

The fight through wooded terrain only needs 4 units per side. I initially saw this as an ideal action to use the Perry 28mm ACW Battle in a box set, that just happens to give each side 4 infantry regiments and I will do that - but it struck me as an interesting battle to also run with my Two Flags - One Nation rule set on a hexed table.

The rest of this post covers an AAR of the hex game. Please use the ‘read more’ tab for the complete post.

We are a little later into the first day. Archer has already come up against Buford’s skirmishing dismounted cavalry and taken some losses. This delaying tactic by the cavalrymen has given time for Meredith to bring his ‘Iron Brigade’ up to block Archer’s advance. Now Archer and Meredith are about to face each other.

Our table (6' x 4' for the 28mm game and less than 4’ x 3’ for the hex game) is completely filled with light woods, with a few sporadic areas of denser woodland, plus some marshy ground adjacent to Willoughby Run, which is a shallow waterway that mostly runs width ways across the table. The only other addition are two rocky outcrops which are placed randomly. I used D10 for width and D6 for depth to identify placement hexes. 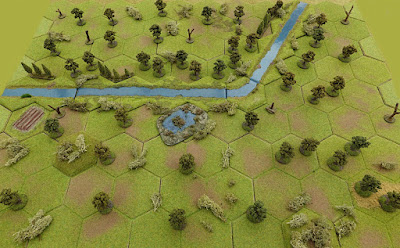 For terrain effect, I had the light woods block vision so that firing could only be done at short range, it also slowed down movement. The denser woodland and rocky outcrops are rough terrain and provide cover against attack. The waterway is fordable. Any terrain that is not light woods, disorders a unit that moves into it.

The basics of the scenario are that the Confederates enter the table and get two turns of movement before the Union can move. At that point the Union regiments dice for entry onto the table and that die roll gets easier each turn until units are guaranteed to enter. So the first part is a meeting engagement.

For my rules, I have the Iron Brigade as Veteran and Archer’s brigade as seasoned, so that when capability tests are taken, there is an advantage to the Union and some of the casualties already suffered by the Confederates at the hands of the cavalry, especially within the command structure, are represented.

The victory conditions are that the Confederates must get at least one unit off the Union board edge.

At the start of play the two Brigade Commanders took ability tests and Archer gained an ability …. ‘Leads from the front’. This will give any regiment that he is with a +1 on the charge, but it also increases his own risk of becoming a casualty.

The Confederate come on in line on the left side of the above map. The Union dice rolls to get onto the board go fairly well, though 24th Michigan lag behind and become late arrivals. Meredith takes his 2nd Wisconsin and occupies the rocky outcrop. This will anchor the centre of his line. 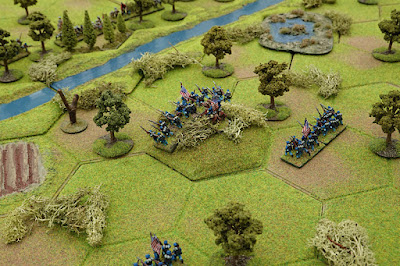 Archer moves up to Willoughby Run without incident, other than a Random Event causes one of his regiments to suffer ‘Command Indecision’ allowing the Union to push it back one hex, so that it is now out of line and lagging behind. 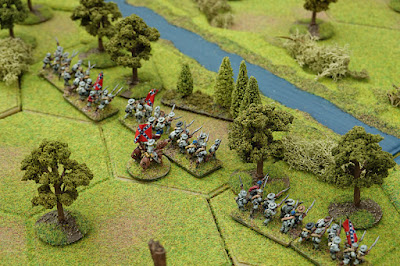 The Confederates get amongst the dense trees that line the waterway and then they enter Willoughby run. From there the Rebel Yell goes up and the Confederates charge into the Union line. The Confederates will suffer penalties for charging out of a waterway and for any disorder they still have on their units. Over on their right, the disordered 14th Tennessee fail their Capability Test and only put in a ‘half hearted’ attack.

Surprisingly, the veteran Iron Brigade do not do particularly well on their own Capability Tests upon receiving the charge and it is only 2nd Wisconsin with Meredith that get off organised defensive fire. 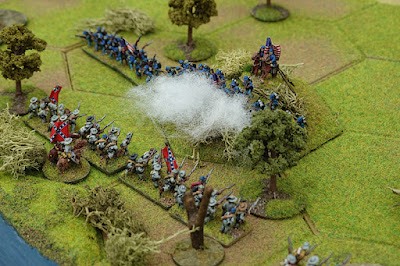 Archer’s attack is a success. They clear the rocky outcrop and push the Union back. They are now just two hexes away from the Union baseline and the prospect of them getting off the table edge is very real. 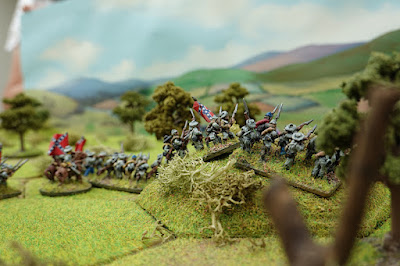 1st Tennessee continue to push, pressing 24th Michigan to the table edge. Archer has become so personally committed to this attack, that he is leaving his right flank out of command. It is with Archer, that the Confederates will win or fail.

To get out of their mess, 24th Michigan have to counter-attack, but it goes badly wrong. They hit a wall of musket fire and then their assault collapses to one of being ‘half hearted’. They take the greater loss and are forced to fall back …… off the board.

The way is now open for 1st Tennessee. Meredith tries to intercept, but they can’t be stopped unless a lucky (unlucky) Random Event occurs before they get a chance to move and exit the table …… and that does happen - almost! 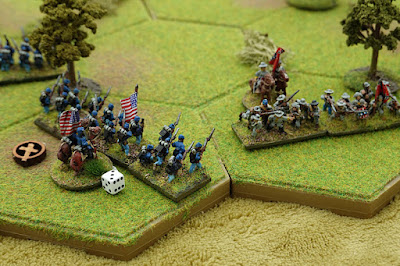 Another Command Confusion Random Event result occurs, but this time it goes against the Union side and so 1st Tennessee in their movement phase advance off the table without hindrance and a Confederate win is declared.

That was a really enjoyable little action. There was more nuance going on than I reported here and it just goes to show how even with just 4 units per side, a scenario can draw you in.

It was a bit of a surprise result as the Iron Brigade had the better Capability Status, they were holding the defensive position and they didn’t have to advance through dense wood or across the waterway that brings disorder status with it, yet they did lose. They did have a few unlucky rolls, especially when taking Capability Tests upon receiving the initial charge.

Most of the units were just getting to the point through casualties, where performance drops and certainly offensive capability gets lost, but the Confederates managed to keep the Union on the back foot.

Whether by fire or melee, an affected unit that takes hits and then fails their Capability Test has to withdraw and will go disordered, with the disorder factor then feeding into their performance. A goodly amount of Confederate fire was causing this and so the Union seemed to be permanently disordered!

Less that half the table width was actually used, so this could go onto a smaller table.

I will play this one more time while it is set-up and then redo the table for a 28mm version with the Bonnie Blue Flag rules.