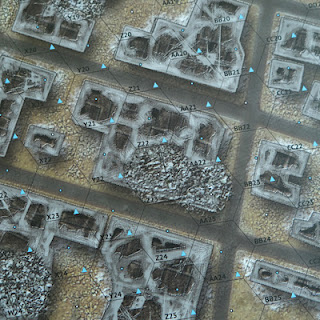 The following post covers the playing of a Stalingrad based scenario from the Old School Tactical system by Flying Pig Games, which is a WWII squad based game.

We are playing ‘Siberians’, a scenario from the Stalingrad module, which states;  ‘The 13th Guards Division was reaching its breaking point. In the early morning hours, elements of the 284th Rifle Division were ferried across the Volga to join the fight. The rugged Siberians of the ‘Tomsk’ Division were feared by the Germans.

These hunters and frontiersmen would push back the enemy and buy the 62nd Army some time. From the beaches, Col. Batyuk’s men plough into the city’.

This is an infantry only scenario. The fighting is across a district that has 7 building blocks. At the end of play, the side that has the most men in a building can claim control of it. The side that controls more buildings than the other, wins.

The game opens with the buildings all in German control, with German riflemen trying to set up a defensive perimeter. They are opposed by Soviet riflemen (13th Guards), who are making a last bid attempt to get a foothold amongst the buildings.

To the Soviet rear, newly arrived shock troops (284th RD) are following up as a second wave to the assault. The Germans can likely handle the tired 13th Gds, but they will be sorely tested by the follow-on Soviet shock troops.

The Germans have their own reinforcements on the way and these are dedicated assault platoons, which will be needed if there is to be any chance of restoring the German line.

This is a night assault, so visibility is down to three hexes.

There is roughly a company of men per side, but we will be concentrating on the actions of Lieutenant Veselovsky, who is part of the reinforcing shock division and will be attacking the mid part of the district.

Our action starts with Soviet riflemen trying to infiltrate into the various building complexes. Among them is the brave Captain Volkov, who has taken two sections of infantry across open ground that is littered with shell holes and debris.

He is aiming for the small block of offices, where a German section, commanded by Sergeant Duerr have just occupied the upstairs rooms and have opened fire on the silhouetted Soviet soldiers, causing Volkov to lose one section, while the other takes cover amongst the shell holes. Volkov himself had a 50 / 50 chance of being lost with his 1st section, but he survived.

Duerr orders his men to create some mouse holes to fire from (they gain an additional cover counter) and the German fire continues to bite hard on the second Soviet section. Who are now pretty much pinned.

The first elements of the Soviet reinforcements arrived just in time. Lieutenant Veselovsky, with couple of shock infantry sections pass Volkov, working their way through debris and assault the office block.

One of their sections get reduced to half strength on the way in, but the group reach the building and enter. Armed with Molotov Cocktails they assault Duerr’s section.

Veselovsky (1), Shock section (5), half a shock section (2), Molotovs (2) = 10 Melee attack points. Duerr loses his section and just about escapes with his own life - Veselovsky now has a foothold in the building].

As other buildings in the district are assaulted, the German defence become stretched, but they have their own reinforcements on the way - well trained assault sections. It is at this point that their command comes briefly under stress [they only get 3 impulse points for the turn …. Dire!].

Duerr, with his second section, is given one of those precious impulse points to put in an immediate counter attack against Veselovsky. Using grenade bundles, they flip a Soviet shock section to half strength, but return fire also reduces the German section to half strength and for the second time, Duerr only just survives the close encounter.

Veselovsky rushes Duerr, pushing the remnants of his unit out of the building. So far the Soviets control 3 of the 7 buildings in the district. Sergeant Stolypin brings up two more shock sections in to the office block and consolidates.

Duerr has taken up position at the shoe factory opposite. Lieutenant Veselovsky puts down covering fire while ordering Stolypin to assault the shoe factory. The Germans put down effective fire, putting broken markers on Stolypin and one of his sections, but his other section enters the factory and pushes Duerr back, deeper into the building.

Veselovsky takes his two half sections and enters the shoe factory to support Stolypin’s men. Brutal fighting breaks out, which sees off the Germans and leaves Duerr dead!

With the shoe factory captured, the Soviets now control 4 of the 7 buildings, so can claim a win. Casualties have been significant to both sides, so by the end of the last turn, neither side has much fight in them left.

Another slick game. It ran for around 2½ hours, during which time I only referenced the rulebook a few times, with the game running off a double sided play aid.

A building dense map generally makes for reduced ranges of vision, but the night fight made this an even more closed down affair and on a couple of occasions, being able to skirt around the buildings outside the three hex range, helped both sides and brought some extra interest.

The shock (Soviet) and assault (German) sections are powerful with attack strengths of 5. A leader, if present in the hex, can allow two stacked sections to combine their strengths, so those sections that managed to operate together in pairs for 10 strength points were quite formidable, especially once close combat started, but they also attracted the bulk of the fire, so suffered heavily in casualties.

Controlling a building for victory purposes is nuanced, because it is based upon which side has the most men in the building at the time of calculation and so even with 7 buildings, it is possible to get a draw result. If this happens, victory is based upon casualties and in that regard, Soviet casualties were much higher and so any victory estimated that way would have delivered a German win.

There is an AAR post here of scenario 1 ‘Rattenkrieg’ (War of the Rats), which includes a little detail of the system. LINK.