1471 - The Battle of Barnet - mixing boardgame and figure game storylines 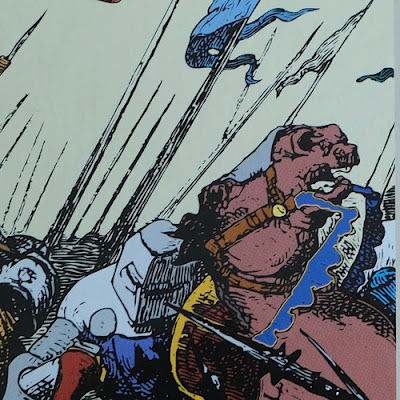 Regular readers will be aware of the imaginations series of Wars of the Roses battles that I have been running on the figures table, concerning the fictitious hamlet of Piggy Longton.

At the current stage of proceedings, while Lord Darcy (Lancastrian) is trying to retake his occupied estates back from Lord Trebian (Yorkist), King Henry (Lancastrian), who has recently passed through Piggy Longton, is trying to get back to London, a journey that has been beset by rebel forces attempting to intercept and capture him.

The King’s journey has become a background part of the imaginations narrative, a sort of sideshow, now that his involvement has moved away from Piggy Longton.

However, I would like to resolve the issue of Kingship. The tussle for the crown between Henry (Lancastrian) and Edward (Yorkist) may have a direct impact on the leaders in our imaginations game. Since we are in 1471, events by coincidence, seem to be drawing us towards the historical situation that gave us the battles of Barnet and Tewkesbury that year.

So for this ongoing saga, we will turn to a boardgame to decide the outcome of Edwards attempt to take the crown in that far, far away place …… Barnet!

The boardgame Blood and Roses (from The Men of Iron series), published by GMT, will go onto the table. There have been some previous posts on this blog about the battles in this boardgame module, which explain the mechanics of the system and for those wanting some insight to what makes the game ‘tick’ there are links in the Resource Section below to those posts, but for this post, the AAR will be narrative based.

Please use the ‘read more’ tab to see what happens in our Battle of Barnet today.

After days of manoeuvring, Lancastrian and Yorkist forces converged in an area close to the town of Barnet. During darkness on the eve of battle, Edward (Yorkist) deployed his forces very close to the Lancastrian line, intending an early attack at first light. What he hadn’t realised was that his army was slightly misaligned with the enemy, so that he overlapped on the right flank, but underlapped on the left.

In the morning there was a very heavy fog. Men could hardly see what was immediately in front of them and in that confusion, Oxford (Lancastrian right) struck the enemy, from his overlapping position and quickly compressed the enemy and caused them to break.

He pursued the routers into the local town and it then took some effort for the victors to be reorganised and return to battle. Unfortunately, during Oxfords absence, the two enemy battle lines, being off-set to each other, had naturally pivoted to a new alignment and Oxford arrived on the flank of his own people.

They thought this was an enemy attack and the shout of treason went up, causing panic and confusion within the Lancastrian ranks. Oxford’s force immediately fled and soon the rest of the Lancastrian forces followed. The Yorkists had won and Edward made his way into London and imprisoned King Henry in the Tower of London.

Coinciding with the above, Queen Margaret (Lancastrian) and her son Prince Edward, landed at Weymouth with a small force. Hearing of the disaster at Barnet and the death of Warwick, she was hesitant in advancing, but she received much encouragement of support to do so. Her army grew and Edward moved his forces to block her. From that came the Battle of Tewkesbury, which the Lancastrians also lost.

Edward, confident that the rebellion was suppressed returned to London. Henry ‘died’ in the Tower and Edward became King. His kingship would go on to survive until his own death in 1483.

Background to our Fictitious storyboard.

We will run the Barnet battle (as a historical boardgame) and if the Lancastrians win, then that will be the end of that, Henry’s reign will continue and our Lord Darcy can be somewhat relieved. But if there is a Yorkist victory, then the impact on Piggy Longton and many places like it, might be significant.

In the game, the ‘fog’ rules give beefy shooting penalties to all archery and artillery attacks. Also units cannot charge and movement over open ground is doubled to two movement points per hex. These are simple scenario rules, but have a notable impact on play. 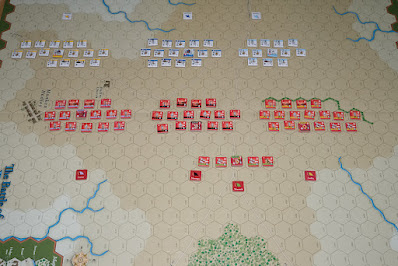 On the above map, you will note that the Lancastrian force (Red) overlaps the Yorkists on the right, but that on left, they in turn are overlapped by the Yorkists (white). Note the built up areas on the left.

Warwick (Lancastrian commander and holding the reserve in the centre rear) ordered his right wing to attack. The mounted men-at-arms were to work their way around the enemy flank. In the thick fog their progress was very slow.

As it turned out, it was over on their left that the Lancastrians were first put to the test, as Gloucester (Richard Plantagenet) drove his battle hard into the Lancastrian positions, held by Exeter.

Here, the Lancastrians, who had taken control of Hadley Church and the nearby Monken Hadley (town) as part of their defensive line, were pushed back by Gloucester, with Exeter suffering heavy casualties in trying to stem the enemy advance. 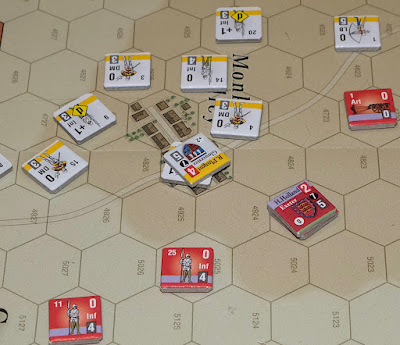 Around the same time, Edward (Yorkist overall commander), holding the centre, pushed forwards into Montagu. While progress wasn’t obvious, again casualties amongst the Lancastrians were telling.

The left is barely holding.

The Lancastrian left came under increasing pressure, with enemy troop numbers managing to concentrate at a ratio of 3:1 in some places. With the two wing leaders drawn in to the fighting, Exeter, against the odds, held the line. 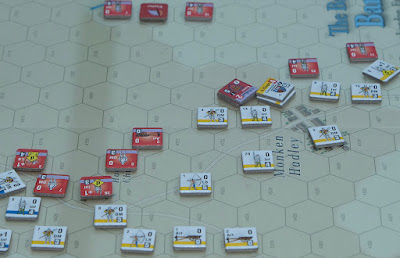 Briefly, Gloucester had to halt to re-order his troops and this gave Exeter chance to do likewise and to encourage some troops who had routed earlier, to return to fight. Exeter had managed to get a messenger to Warwick, requesting assistance from the mounted reserve.

In the the centre, a Yorkist attack against the Lancastrian guns had ended in heavy Yorkist losses and as Edward became increasingly personally involved in the the battle, one of his aides had to remind him that “Dead men can’t weareth a crown” prompting Edward to return to a more ‘sensible’ position in the second line.

Though badly bruised to centre and left, the Lancastrians had held, if only they could exploit their advantage on the right “Yond bewitching fog”!

As Gloucester renewed his assault with great vigour, he pressed hard and hurt Exeter’s line, coming close to breaking it, but out of the fog, foot soldiers suddenly appeared and drove into the flank of a contingent of men-at-arms and amongst the number of those that fell …… was Gloucester himself!

There was immediate panic and his entire battle fled the field, with some of Exeter’s men in pursuit, though most were too tired and worn to follow. The Yorkists had just lost their right wing.

Warwick’s cavalry had started to take their place on Exeter’s right, so there was some hope that with the enemy flank collapsed, the pivotal moment had arrived that would allow the Lancastrians to turn into the Yorkist centre and crush them.

Aware of the growing crisis, Edward had to extend his line to try and partly cover the gap left by the collapse of Gloucester’s wing, while also pushing hard in the centre. His troops seemed too few for the task and the enemy looked immovable, but they had already suffered grievously and surely they were close to collapse … another point of crisis was developing.

His forces suffered the worst of it and it was only Edward’s personal intervention that stopped his battle routing. Another small lull in the fighting followed as Edward reorganised.

Renewing the Yorkist attack, rather like a rotting door ready to be kicked down, Montagu’s battle in the centre finally collapsed, very heavy casualties finally counting for everything.

The Lancastrian centre may have collapsed, but the Yorkist centre was stretched trying to cover a long frontage. Warwick took the opportunity to have the reserve cavalry attack Edward’s position on its vulnerable extended flank. Both sides knew that the fighting was closely contested and that whoever could get the edge, might turn the battle irreversibly in their favour.

The Lancastrian horsemen were now pushing not only in the centre against Edward, but also over on the right against Hastings, trying to turn his flank …. might the moment of decision have been upon them?

Victory as another notable falls!

The fickle finger of fate stood ready to upset the Lancastrian’s best efforts. As Warwick’s horsemen hacked their way into Edward’s extended line, Warwick joined the fray and was no sooner amongst the enemy when he was hit and killed by an arrow from Yorkist longbow. The men around him initially held their nerve, but as word spread that the army commander had died, the Lancastrian army, through heavy losses as much as anything else, just disintegrated and fled the field. A very relieved Edward gathered his commanders and clergy and gave thanks.

The Yorkists had suffered 15 points worth of losses, but the Lancastrians had lost 34 points, highlighting the nature and direction of the battle from its earliest moments. Even though they were gaining a positional advantage on the flanks for their horsemen, their fighting spirit was just too damaged to continue.

[Warwick was lost in the real battle, but in our replay, the loss of Gloucester, a significant and competent military commander, would have been an equal blow to the Yorkists].

The outcome for our Piggy Longton narrative.

Well, since our game gave the historical outcome, we can say, as per history, that Edward took control in London and placed King Henry in the Tower. Bound by that same historical path, we can also accept that Queen Margaret has just landed at Weymouth with her son and is gathering an army, which will result in the battle of Tewkesbury. As that battle is also included in the boardgame package, it can be fought at some future point to finally determine the fate of King Henry.

In the meantime, we shall return to Piggy Longton as Lord Darcy prepares his forces for another assault against the Yorkist forces that are controlling his estates. The Second Battle of Coron Torr awaits!

The battle of Bosworth (Men of Iron game) AAR. LINK

The most recent battle at Piggy Longton. LINK

Tewkesbury 1471 - The Last Yorkist Victory by Christopher Gravett, published by Osprey Publishing in their Campaign Series (book 131) has a section on the Battle of Barnet, pages 35 to 48, plus background information and details of the armies / commanders.

PLEASE NOTE, FOR THE TIME BEING THE COMMENTS SECTION HERE HAS BEEN SWITCHED OFF, BUT THANK YOU FOR YOUR VISIT, IT IS APPRECIATED.