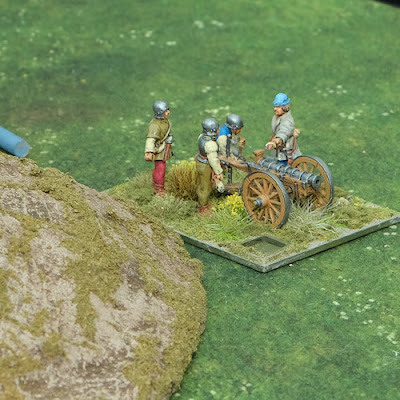 In continuance of the last report (the Spy Master - see Resource Section at the foot of the post), with Salisbury and half of his army, chasing off towards Little Banbury in search of King Henry, the garrison that he left at Piggy Longton was about to be attacked by Lord Darcy and Beaufort, Duke of Somerset.

The Lancastrians had tricked Salisbury into believing that King Henry was at Little Banbury, a deserted village 30 miles north, so that he would divide his army in pursuit of the King.

What the Lancastrians didn’t know was that before leaving, Salisbury had ordered the nearby Yorkist supporter, Lord Trebian, to send two bill and two bow contingents to the hamlet to reinforce the garrison in his absence. Even as Somerset and Darcy were breaking camp and readying their troops for the attack on the hamlet, Lord Trebian’s men were already marching!

Alerted to the Lancastrian advance by cavalry outposts, the Yorkist garrison under Sir John Lisle had gathered on the front slopes of Coron Torr (latterly known as Crown Hill - see the history of Piggy Longton in the Resource Section below).

They watched as the Lancastrians, below them, fanned out from the march into line. Hemmed in by Smoggy Brook, the Lancastrians advanced in two bodies, the mainguard on the right under Somerset and the vanguard on the left under Lord Darcy, with their archers ranked out to the front. Light cavalry were stationed to the left flank and handgunners to the right.

Sir John was out numbered, but he knew that Trebian was sending reinforcements under the command of Sir Giles of Chevithorne and that hopefully they would arrive within the hour - could he hold on? …. he must!

[ADMIN - just a few days previously, Somerset and Darcy had been defeated in battle by Salisbury in this area, the consequence being that they had not had time to replace their spent arrow shafts, whilst the Yorkists of course had recovered a goodly number of usable shafts from the battlefield. During play, whenever Lancastrian archers roll two or more sixes when shooting, roll an additional die and on a score of 1 - 3, that archer contingent goes ‘out of arrows’ for the rest of the game.

At the start of play, all bill and bow (only) contingents will test to see whether they are retinue or levy troops. Each contingent in Sir John’s force roll a die. On a score of 1 - 3 they count as levy, on 4 - 6 they count as retinue. Somerset and Darcy do the same, but only a score of 1 - 2 will count as levy, with 3 - 6 being retinue. When Sir Giles arrives, his contingents must likewise test and he will also count 1 - 2 as being levy.

The Chevithorne reinforcement of two bill and two bow contingents arrive on the table next to Smoggy Brook at the start of turn 2 and at that time, four additional Action Dice are added to the Yorkist allowance and the Yorkist Army Value will increase by 14.

Yorkist archers on the hill benefit by their range being increased by 1 Distance Unit (DU), but they will not be able to increase that further during play with any bonus that might normally be available.

Once the Yorkist reinforcements arrive, the armies will be very similar in size, points and demoralisation levels.

Sir John arrayed his force on the eastern slopes of Crown Hill, with captured artillery sitting on his left flank and a small body of handgunners on his right. With his archers in front and the billmen behind, he was as ready as he would ever be. [He was fortunate that only two contingents were levy …. the Lancastrians fared worse in the random selection. Levy troops are harder to put into command and less able to pass Discipline Tests].

The Lancastrians advanced to within extreme bow range, taking some losses as they did so from Yorkist archers, who due to their elevated position, were able to shoot a little further.

As battle opened, there was a crescendo of the twang of bowstrings and whoosh of hundreds of arrows in flight. Overall, the Lancastrians got the worst of it. Their lines became disordered as individual contingents started to make their own way towards the hill. 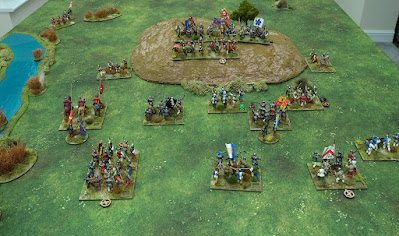 On the Lancastrian left, the contingent of bowmen from Piggy Longton itself, under the command of Darcy, managed to both advance and shoot back, initially causing many casualties on Sir John’s right, but eventually, withering arrow showers from the hill drove these archers off.

On the Lancastrian right, levy archers put in an amazing effort, removing one Yorkist contingent (see photo above), but going ‘out of arrows’ in the process. The opening stages of battle had become a mess for the Lancastrians, their contingents were spread out and their losses heavy (3 archers contingents lost already).

The sound of trumpets.

Trumpets signalled the arrival of Sir Giles on the battlefield. His men had crossed the bridge higher up the Smoggy Brook and were advancing to take their place on Sir. John’s right, who would later write "we w're mightily reliev'd to knoweth yond Trebian’s men, valorous and true, hath fallen in amongst us to shareth our fate".

Darcy threw his cavalry wing out on the left to slow the advance of the reinforcement, which became ‘bottlenecked’ between the Smoggy and the high ground as the cavalry first drove the handgunners off and then pinned the archers. 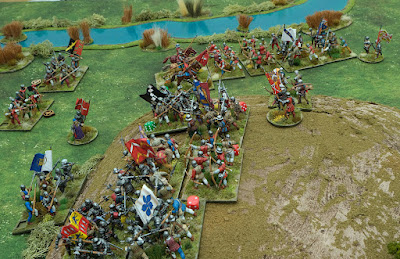 Fighting on the slopes.

Somerset pushed his heavy troops up the hill and the clash of steel on steel began. Joining his men-at-arms, he made steady inroads on the right, while sustaining heavy losses on the left. 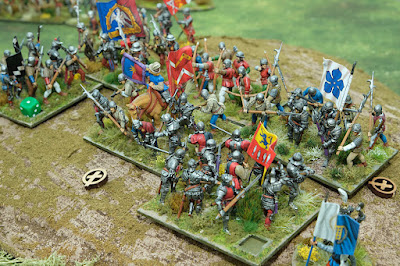 The momentum of advance soon ground to a halt as the defenders on the hill continued to extract a high price. First, Sir Robert Benyon’s contingent on the left collapsed, followed quickly by the Lancastrian men-at-arms over on the right. Somerset had been in their front ranks, urging his men on and as his part of the line broke, he was taken to the ground and dispatched by Sir William Pickleton’s Men.

It is all over

Darcy was just setting up a second attack against the left side of the hill when the news reached him that Somerset had fallen. The Lancastrian army was wavering and already starting to retreat in places. Darcy, assuming overall command and trying to bring some order to the debacle, managed to disengage the army, made possible only by the lack of enemy cavalry and the use of his own currours to screen the retreat.

Well that was a surprise! Having earlier split the Yorkist army due to spreading misinformation, the Lancastrians had simply assumed that they would recapture Piggy Longton and deal a spectacular blow to Salisbury’s divided army.

Instead, they had lost Somerset and some of his best troops. Worse, the rescue of King Henry was now in jeopardy. A King in hiding did not have the authority needed to rule. Would dynastic changes now be the most likely outcome? If so, that would almost certainly mean seizure of Darcy’s land and at best, incarceration or exile for him.

Overall, one could not say that the dice favoured one side or the other. Certainly the hill position helped the Yorkists as in this system, they get an extra dice for being uphill of the enemy in melee. Sixes are your best friend, while ones, twos and often threes, are the scores of losers! Get enough of them and they can ruin the moment, but their effect is often smoothed out over the course of play.

The Chevithorne reinforcement didn’t seem to have a direct influence in the battle, as it entered the table a little bit too far away to be of early use. On the down side, it did cost the Yorkists quite a bit of their command capacity to get the reinforcements forwards, but on the plus side, their presence and threat did pretty much fix Lord Darcy in place, leaving Somerset alone to assault the hill ….. and that was likely the undoing of the Lancastrian plan and all of this, just because Salisbury two days earlier had the foresight to get Lord Trebian to strengthen his garrison at Piggy Longton.

The artillery continues to be useless! Lots of smoke and noise and a liability if assaulted.

With hindsight, to better reflect the narrative that I had set, with Salisbury taking his best troops with him to hunt for Henry, it may have been better when testing for levy troops at the start of the game, to have Sir John’s contingents becoming levy on a roll of 1 - 4 rather than a 1 - 3. That would have been more in keeping with the story line and set up a better game dynamic and tension between the hill position and the reinforcement.

Well over the next day or two, Salisbury will return with his forces, angry at being sent on a wild goose chase. United with Sir John’s victorious force, they will be difficult to dislodge and no doubt, he will have his cavalry and intelligence officials out and about, scouring the countryside for word on Henry’s location, it can surely only be a matter of time before Henry is captured.

Darcy is somewhat limited in his options, not least because because his own estates are under enemy occupation and he has to wait the arrival of Somerset’s son, 4th Earl, to negotiate a way forward with Somerset’s forces.

And what of Henry? He is with the ever reliable Sir Roger and a small body of lesser knights and retainers at Crispin Priory. Might they take the initiative and start to move the King towards the safer territory of Oxford? Continued delay in getting to London could significantly harm Henry’s chances of keeping the crown, something that Henry himself may have something to say about.

The previous post on the SPY MASTER, which gives the background to this scenario. LINK

PLEASE NOTE THAT AT THE MOMENT, THE COMMENTS SECTION HERE IS SWITCHED OFF.