A battlefield to fight over .... often! 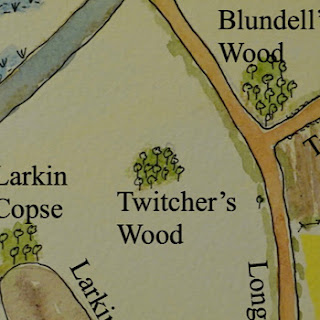 I have decided to formalise my occasional blogging references to the fictitious campaigning area of Dungborough that contains the Parish of Piggy Longton, making that landscape a focal point of some Wars of the Roses battles soon to be fought.

We have twice already visited this area in previous AAR ramblings. The first time was in 1066 for the ‘Not Hastings Battle’ which occurred at Little Bump Hill (link to the AAR in the Resource Section below). 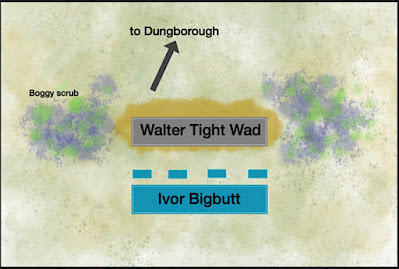 The second time was the 1471 Battle at Dungborough, with an action centred upon Larkin’s Hill (link to AAR in the Resource Section below). 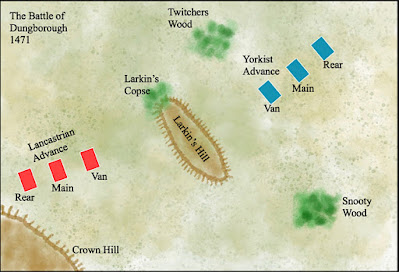 Dungborough has always been something of a backwater, but commonly sitting at the juncture of influence of either great families or dynastic power bases, it has frequently borne the brunt of the rivalry and machinations of others.

Dungborough is partly derived from the old english ‘burg’, meaning a fortified settlement. There are few candidates for such a settlement amongst the parishes of Dungborough, but it is most likely a reference to a few buildings, surrounded by a wooden palisade, that once sat atop Crown Hill in more ancient times. Although there are no signs of any of these structures present today, the topography feels right, especially as the hill has a steep slope to its southern flank, a brook to the north and that it is the only notable defensible feature in the area (clicky map). 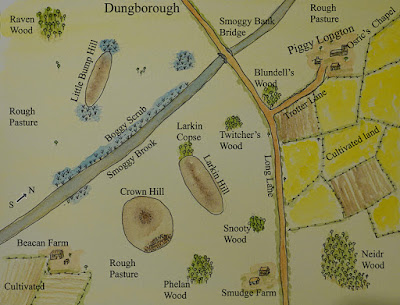 We can be further persuaded by this probability as Crown Hill itself may well have had royal connotations as an ancient seat of power of tribal chiefs that took advantage of the dominant position. The old chronicles make mention of a procession of warriors and Druids to ‘Coron Torr’ by the Dark Stream, which seems a good fit for Crown Hill and its close relationship with Smoggy Brook.

The landscape has certainly been in use for thousands of years, demonstrated by some of the names that typify an early Brythonic occupation, such as Beacan (meaning small) Farm and Phelan (meaning wolf) Woods. Even the more contemporary Raven Woods has a woodland pathway that locals still refer to as the Brendan, a clear Brythonic linguistic connection to the raven.

Neidr (meaning snake) Wood is also of ancient origin and the least touched of the local habitat, providing mighty oaks and a hunting ground to the benefit of His Lordship.

Piggy Longton itself is now a small hamlet, originally of religious significance to a small Anglo-Saxon population, having at that time a single stone building known as Osric’s Chapel, but which by the mid 9th Century had fallen into disuse, following significant depopulation of the parish, mostly due to the viking raiding parties and subsequent local economic collapse.

The hamlet of Piggy Longton came into existence when the first Viking settlers, avoiding the common land grazing pastures of the local Anglo-Saxons to the south and the wet land to the south west around Little Bump Hill, established a farming community. Osric’s Chapel was subsequently rebuilt and enlarged as Piggy Longton expanded to become the centre of administration across the local estates.

It is bounded to the west by Smoggy Brook and whilst this is not a particularly deep watercourse, on the lower stretches leading from Smoggy Bank Bridge, the western bank is notably boggy and even local drovers avoid it, using instead the bridge as a crossing point to move their livestock to the Little Bump Hill rough pasture or to journey to the spring and autumn markets at neighbouring West Rottington.

The rough pasture is common land and is grazed by local livestock, while the outer perimeter of the cultivated land is marked out by ditch and hedgerow as a protection against wandering (and hungry) livestock (in much later years, the interior fields would increasingly be defined with drainage ditches and some hedgerow).

For most of the time, Piggy Longton provides a picturesque idyll for its tenants and workers, but its strategic position, the tactical importance of Smoggy Bank Bridge and a small treasury from local tax collection, ensures the occasional explosion of violence, as is the wont of others to wreak. 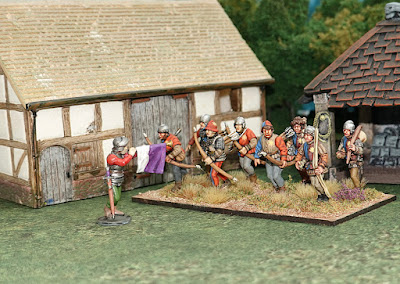 As it happens, today there is a gathering of interest at the Market Square in Piggy Longton, as a herald has arrived with a decree that the parish must assemble an array of their finest archers and be ready to join their Lordship in defence of the parish!

The AAR covering the 1066 Not Hastings action. LINK

The AAR covering the 1471 Battle at Dungborough. LINK

This is the 80mm basing that I am planning to use for WotR forces. LINK
http://battlefieldswarriors.blogspot.com/2020/09/basing-thoughts-for-bosworth_23.html
Posted by Norm at 14:00