It is a beautiful morning in mid August 1066. The sun is bright, the birds are singing with the corn wafting gently in the breeze, a perfect moment for battle thought Ivor Bigbutt, local commander of the West Rottington Array. 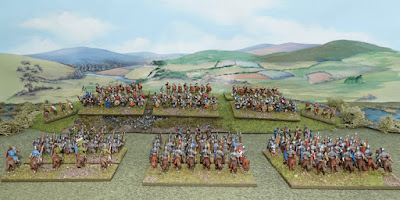 For some months he has been in dispute with Anglo-Saxon Thegn, Walter the Tight Wad, over the payment of tribute and with the harvest approaching, Bigbutt feels a reminder as to who is really in charge is due!

With a fine body of cavalry, well supported by heavy infantry, Bigbutt set out for Dungborough yesterday. His route was to take him over Little Bump Hill and onwards to the settlement of Piggy Longton, the main town of Dungborough, to make a demonstration of force and intent.

However, Walter, aware of this raid, has brought local shire forces to block the advance and is already astride Little Bump Hill to intercept Bigbutt.

As the two armies face off, Ivor Bigbutt still fancies his chances in taking the slightly high ground of Little Bump and humiliating Tight Wad.

It looks close, with the local turf accountant Filthy Giles, taking bets of just 1:1 evens on the fortunes of Tight Wad. Will Walter the Tight Wad have his purse strings cut? Has Ivor Bigbutt become too big for his trousers?

Please use the ‘read more’ tab for the outcome of this escapade.

This battle is being fought out on a large pinboard (34” x 22”). Figures are 12mm Kallistra, based to 80mm frontages.
For reasons of familiarisation and their relationship with this period, I am using core principles from the rules in my boardgame (Invasion 1066: The Battle of Hastings, published by Revolution Games), but will also over time re-run the game with other commercial rules (Hail Caesar, Swordpoint, ((Basic)), Sword and Spear, Impetvs 2, Kings of War Historical and Neil Thomas’ Ancient and Medieval Wargaming), which sit on my bookshelf, as I try to draw some comparisons and settle on a rule set for the period.

This is a frontal assault, with the hill having flanks that are very boggy with heavy scrub, making the flanks impassable. 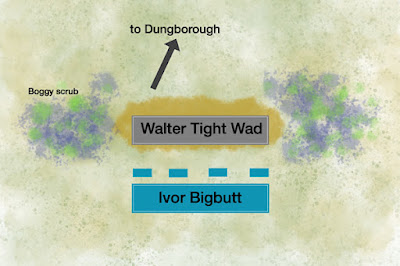 Bigbutt has drawn his force up into three lines, with archers to the front, followed by heavy spear and cavalry to the rear.

Tight Wad is in a good defensive position and has formed into shiedwall, with Thegns and Housecarl in the front ranks and the General Fyrd supporting. They have few missile troops.


The battle opens with BigButt’s archers trying to disorder the Anglo-Saxon line. This is a relatively short phase in the battle as the archers quickly go ‘out of arrows’ and retire, but Walter’s left flank has become disordered.

In the next phase, Ivor sends his heavy infantry spear on both flanks up the front slope of Little Bump Hill and clashes with the Thegn / Housecarl shieldwall. The defenders hurl hand thrown axes and rocks, without effect. The attackers eventually become disordered and pull back to reorganise. The housecarls and thegns on the Anglo-Saxon left flank pull back out of the line to reorganise from their disorder caused by the bowmen earlier and the General Fyrd advance to fill the vacated position. 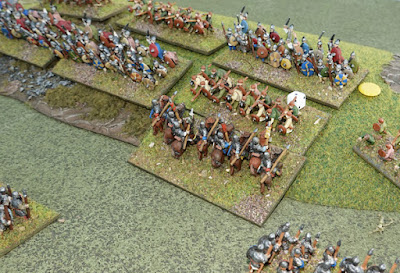 Above - unfortunately for Walter, this happens just as Ivor’s right wing launch their cavalry, overrunning and routing the Fyrd. They push on, catching the reorganising houscarls and thegns, who fall even further back.

Below - To avert disaster, Walter orders the Fyrd from his centre reserve to start to move across and to support the failing left flank.

Emboldened by Walters discomfort, Ivor ordered his heavy infantry in the centre to assault the hill and his light cavalry on the left flank to charge and then feign a retreat, hoping that the Anglo-Saxons would think the cavalry were routing and be tricked into running off the hill to pursue, where they could be caught exposed in the open, without the protection of high ground.

Neither of those things worked. The Anglo-Saxons stood firm, with a grim determination to keep their strong position. Worse! in the centre, Ivor’s attacking infantry were so badly mauled that they routed. Even the victorious cavalry on the right flank were now meeting stubborn resistance from the housecarls.

Frustrated, Ivor ordered a renewed effort all along the line. Again a cavalry feigned charge and retreat on the left failed and the centre was just at a standstill. Only on the right did the situation improve, with the housecarl / thegns finally routing, forcing Walter to send the last of his Fyrd reserve to shore up that position.

Ivor ordered the light cavalry on the left to stop making the feigned cavalry attacks and instead have the heavy infantry assault the slope. Tostig, commanding the left and annoyed at the delays cause by the ‘fancy footwork’ of the light cavalry, led his infantry up the slope with such ferocity that the Anglo-Saxon line broke and ran, but Tostig paid the price with his life.

Walter, holding the centre with his housecarls, seeing that both his flanks had collapsed, knew that he must disengage if he was to save the remnants of his army. Ivor set his light cavalry in pursuit, finally seeing off the last of the General Fyrd.

Below - with Walter in full retreat back towards Piggy Longton and Little Bump Hill covered with Ivor’s now disorganised troops, Ivor decided to call off the pursuit and consolidate his position on the hill.

Over the coming days, at the best hotel in Piggy Longton, the two commanders would come to an understanding on the payment of taxes and reparations.

Conclusion.
A fun and tongue in cheek encounter, very enjoyable and a good way to put a decent density of troops into a small space. In trying to use my own boardgame rules, which are hex based, but still fresh in my mind from playing them a couple of weeks ago, it became a judgement as how best to convert the system from hex to open table and more importantly, how to determine at what point to allow increasing casualties to deteriorate into routs, since the figure game was using less than 20% of the units that the boardgame uses and the rout system was designed to work with bigger armies.

After several ideas, I decided the best way was simply to allow casualties to accrue with individual bases and that each time an ‘elim’ result was absorbed by the unit (not the national / warrior group as in the boardgame), it would roll a D6, adding the number of ‘elim’ results accrued so far (including the one causing the test) by that unit to the score and then have any final score of 6+ causing the unit to rout off the field.

The General Fyrd would always add +1 to this test. This seemed in theory at least, a mathematically convenient and balanced way to get this small game to follow the course of battle, with cohesion loss being linked to casualties, but with some uncertainty as to what would rout and when. Only playing it would tell if enough had been done to make an interesting game.

It wasn't and part way through, I also decided that each ‘elim’ result accrued would reduce the unit’s fighting value down by 1, so the unit would become increasing likely to become disordered and gain further ‘elim’ results, while being less capable in attack.

Anyway, for a fun game, it seemed to work. My intention with these figures is to grow the armies (they are already bigger than shown here) so that a ‘fuller’ battle can go onto the table. More to follow on this period I think - in fact, it looks like The Shenanigans Gazette is already trying to romanticise the story. 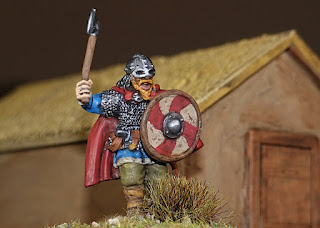 So just who is Ivor Bigbutt? Our reporter Monty Bartholomew ‘Slackjaw’ Smythe, managed to steal a quick interview with Master Gubbins, the Keeper of Rottington Hall and Personal Secretary to Bigbutt himself.

Gubbins, who wants to remain anonymous and have no mention made of the 50 quid that Slackjaw gave him, said that Bigbutt was by nature a man forged by aggression, greed and a big axe.

The son of a stable lad of low birth and his family never knowing sixpence or a pocketful of rye, Ivor never forgave the aristocracy for giving him the title of Bigbutt in a mock knighting ceremony that was part of the merriment and festivities hosted by the Sheriff to celebrate his new tax laws, held at a party in the big hall, where four and twenty blackbirds were baked in a pie.

He petitioned the King to have his name changed back to Bunion, but the King was convinced that Ivor would become a great Ass et and immediately promoted him to Captain Bigbutt of the West Rottington Array.

His Foray towards Piggy Longton today was intended to impress the Sheriff and put his days of shovelling at the stables behind him. His local victory at Little Bump Hill will no doubt have brought him some valuable prestige with Sheriff Godric, who is in his counting house, counting out the money, while his wife is in the parlour eating bread and honey.

A splendid days work and a dainty dish to set before The King.

Who knows what further adventures may lay ahead - none we hope!

Note - The rather nice 28mm figure (posing as Bigbutt) is in fact - Harald Steptoesson, a special miniature from Warlord Games, with a humorous name based upon the 1960’s and ‘70’s BBC sitcom, Steptoe and Son, about a rag-and-bone man outfit. The son’s name was Harold and the character duo were warmly adopted by UK TV audiences. The Harald figure is given as a feebie to anyone buying the Hail Caesar Shieldwall Supplement directly from Warlord Games.

Note 2 - for anyone confused by the Gazette section, this is just a bit of fun, a story interlaced with a load of old rubbish (plus the nursery rhyme) as a gentle passing nod to the whole Fake News thing.