Returning to the pinboard project again, I have upgraded the board and given it a first outing, with a fictional divisional action from the American Civil War. 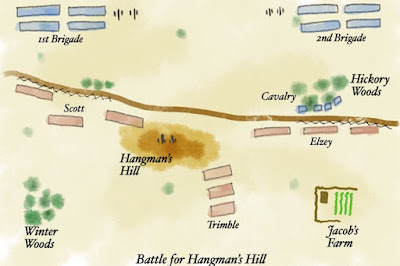 Figures are Kallistra 12mm and the rules are the Perry’s Firepower set, with inches converted to centimetres.


This post discusses painting the board and gives a brief AAR just to demonstrate some action in a small space.


Please use the ‘read more’ tab for the rest of this post.


The Board
First off, the new pinboard goes posh with an aluminium frame and a thick card centre, so it is very light and sturdy. It is faced on one side with some sort of grey thin felt type material. The internal measurements of the board are 34” x 22”. It is currently in stock at Homebase (UK) for around £17.


With a mini paint roller and those little tubs of tester emulsion paints, I rolled paint onto the felt material quite vigorously (to get it spread evenly before it dried on the absorbent surface) in multiple directions, adding slightly different quantities of the colours as I went along for some variety. Overall, I was aiming for a green surface. Masking tape had been applied over the aluminium frame to protect it from the paint and this worked well.


The emulsion ‘sets’ the fleece surface, so rough fingers don’t catch on it and hopefully it will control any bobbling. The bonus is that this gives a light textured effect.


The maths.
A few weeks ago, I put some 28mm units on a 6’ x 3½’ table and used the Firepower rules, which calculate all distances in inches. Going to a smaller board, I will convert inches to centimetres. So our 34” board being 85cm, converts to the equivalent of 85”. Likewise the 22” depth of the board will become the equivalent of 55” (becoming a 7’ x  4 ½ ‘ equivalent). In both dimensions, this actually becomes a bigger equivalent to the table I was playing on a few weeks ago, especially in terms of depth, so artillery ranges should feel a bit more proportionate to the battlefield.


Of course, part of this scaling down means I am using 12mm figures instead of 28mm and the typical unit frontage will drop for 150mm that I was using for 28mm, to 80mm for the smaller figures.
A bit of terrain and two ACW forces gets us into the action. 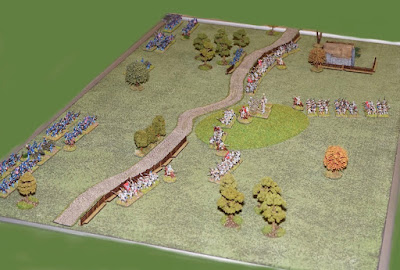 
The Union have two brigades advancing towards Hangman’s Hill, which dominates the Pence Turnpike. They have sent their cavalry ahead to occupy Hickory Woods, from where the troopers discover that Ewell’s Division was concentrating, with two brigades already in control of the turnpike and Hangman’s Hill, plus a third brigade under Trimble moving up with a view to scouting ahead of these defensive positions. It was too late to warn Shields, the lead elements of the Union division were already approaching and about to advance into this hornets nest! 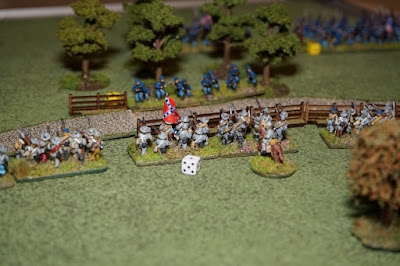 Above - the dismounted cavalry took up position at the edge of the woods, but in a short action were forced back towards the rear of the woods. The Confederate left (Colonel Scott) came under pressure from 1st Brigade, with one of their regiments falling back in disorder and seemingly taking the worst of the casualties.


To an anxious Shields (Union Commander), this was in contrast to the fortunes of 2nd Brigade, who were closing on the Confederate right, with 13th Illinois Infantry in particularly taking heavy losses, but spurred on by their regimental commander, Colonel Sullivan, the 13th picked up their pace and broke into a charge, taking devastating fire from 31st Virginia Infantry on the way in.  The volume of fire was too great and their attack collapsed and 13th Illinois routed.


2nd Brigade found itself in further peril as their artillery (Battery ‘L’) from the moment of deployment had been taking long range fire from the muskets of 13th Virginia Infantry, lining the turnpike and Lusk’s artillery, located on Hangman’s Hill. In an unequal engagement and with a couple of gun carriages smashed, ‘L’ Battery was forced to retire from the field.


The height of the battle came as 1st Brigade, pushed onto the turnpike to take advantage of their initial gains before their left flank was enveloped by 58th Virginia Infantry, who unopposed, had moved down from Hangman’s Hill. There was also the growing threat of Trimble’s Brigade (below photo), with three fresh regiments moving up the centre and just cutting across the turnpike, being able to move either to the left or right and outflank either of the Union brigades. 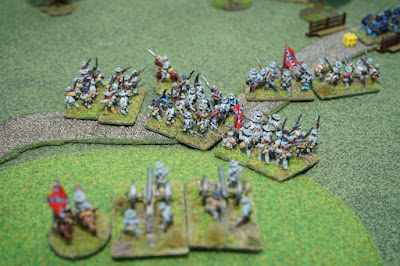 But rather than ‘one more push’ breaking the Confederate defence in timely fashion before Trimble could act, both Union brigades lost the initiative and were thrown onto the back foot, though for different reasons. 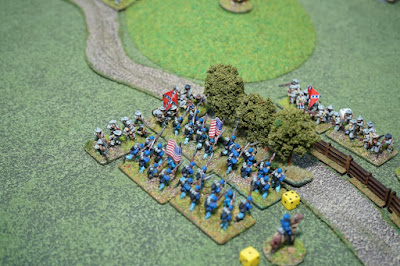 Above - 14th Indiana Infantry, forming the left flank of 1st Brigade, were struck hard in that left flank by 58th Virginia Infantry, attacking from from the direction of Hangman’s Hill. The 14th, already mauled from their approach to the turnpike, were shattered by this attack and routed from the field. 67th Ohio turned to face the flanking threat, but were immediately sent reeling back, as they too fell to the full force of 58th Virginia’s assault. Assailed from two directions and with Trimble’s Brigade clearly now making towards them, 1st Brigade disengaged and fell back.


On the other flank, 2nd Brigade had been taking heavy casualties, but a local success in which 39th Illinois Infantry chased off 25th Virginia Infantry from the turnpike, drew the Union into further commitment, when perhaps they should have used their discretion to disengage instead, as the battle had generally been going badly for the Union. 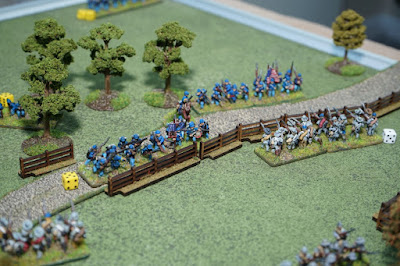 Above - Instead, 5th Ohio Infantry, that had been a rear support to the 39th Illinois, moved further to their left to take a front line position in a gap that had been left by the collapse of the Brigades left flank.


The reason for that collapse had been due to the confident defence and firepower put down by 31st Virginia Infantry (Confederate far right) and 5th Ohio basically advanced into that same killing ground and suffered so grievously that they were beaten back. It was all over for 2nd Brigade and they too had to leave the field.


That was all a bit of a one sided affair, brought about by a bad scenario design that did not match up with the key elements of the rules. In Firepower, units throw a bucket of dice when attacking and will often hit on 4+ or 5+. Only units behind cover get a chance to throw ‘save’ dice (4+). So Union units took an awful lot of punishment on the way in, while the Confederates, who were lining a fenced road (counts as cover in the rules), took far fewer casualties, even when charged.


Nine hits removes a unit from play. At the close of play, doing a bit of jiggery-pokery maths with the hits accumulated, I settled on assessing casualties as being 80 for the Confederates and 290 for the Union, with 4 guns also lost, which helps quantify the ratio of harm that was being done in this scenario.


Anyway, what the rules do or don’t do is another matter, of importance here is seeing a game with a total of 21 formations being put onto a pinboard sized playing area. I’m not sure why it is, but in ‘real life’ to the eye, the table and units looked very good, photography does not seem able to capture ‘that look’.


The exercise encourages me to do more of this sort of thing and perhaps doing my own rules that would work to meet my own pinboard ‘imaginings’ of how things should run. At the back of my mind is also doing a second board that is 4’ x 2’, with the scale advantages that we get from 12mm, small unit frontages and centimetre measurements, that extra 14” on the pinboard width would be quite versatile from a battlefield manoeuvre perspective.


Resource Section.
COMMANDERS is my sister webspace, that is more snippet based than here. LINK
https://commanders.simdif.com


An earlier blog post that looks at the Firepower rules. LINK
http://battlefieldswarriors.blogspot.com/2015/11/perry-acw-28mm-rules-firepower.html


An earlier blog posting on the versatility of the 34’ x 22’ pinboard. LINK.
http://battlefieldswarriors.blogspot.com/2015/02/pinboard-wargames-for-small-spaces.html