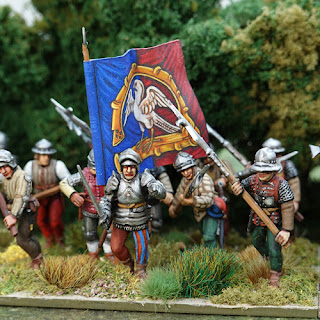 Three more infantry melee bases pass across the painting / basing table, each on a 80mm x 60mm base plus a 10mm die holder.

This sees the last of Phil’s infantry moved across to the basing system I am using, plus some additions of my own to make the base numbers up and some new Men-at-Arms that I recently picked up in both plastic and metal.

In trying to build the Lancastsrian and Yorkist armies equitably, so that they can give some games while the collection grows, the Yorkists see themselves getting one base and the Lancastrians two. 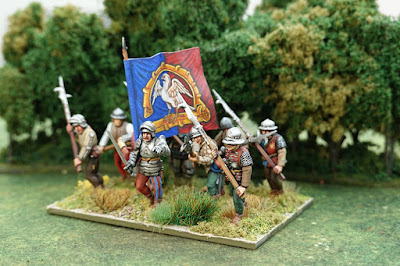 First up (above), mainly to use a rather nice ‘Petesflags’ banner, we have a bill contingent belonging to Richard 3rd Duke of York, who died 1460 at the battle of Wakefield. His banner has the falcon in an open fetterlock. 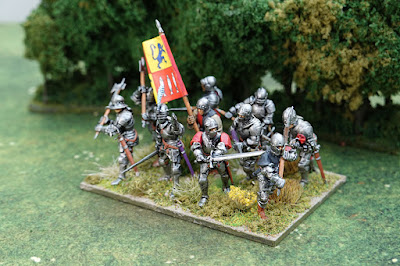 To date, the Lancastrians don’t have a Men-at-Arms foot unit, so that changes with the addition of the above contingent under the banner of Henry Percy. There are two Perry metal figures, placed to the sides to keep the base balanced weight wise. 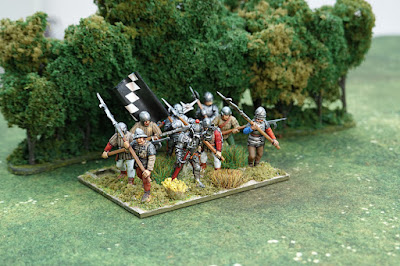 This bill contingent (above) fight under the banner of Sir Robert Baynton. I can’t find a lot of information about the man himself, but it appears he was a knight who carried the standard for Somerset at Tewkesbury 1471, but was taken prisoner and he died the following year. 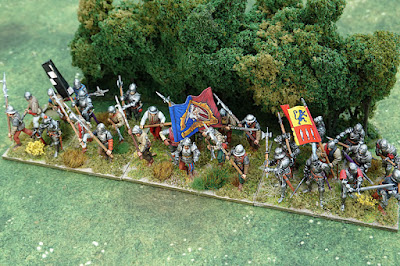 (Above) Three contingents side by side have a footprint of 240mm, so that or even one base wider seems an okay size for one of my ‘wards’ or ‘battles’ in getting pocket armies of 28mm onto a 6’ table. each of these infantry melee contingents will be paired with an archer longbow base.

Finally, I just need to do some more billmen for the next game, so ….. 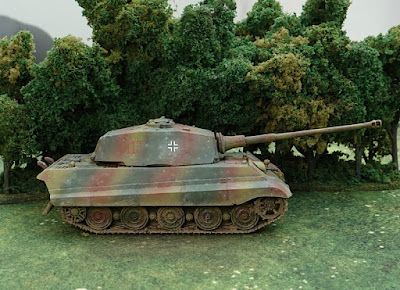 I painted up a couple of Tiger II’s from the Pegasus fast build range. I’m not hugely a ‘big cat’ fan and probably would have been just happy with one, but there will be a time and a place for them, so they are done.

As with their other kits, the vehicles are a straight forward build, but have generic track facing and do not come with decals, so the ones here have been added from a sheet bought from The Plastic Soldier Company.

I have put muck / mud on the track face to hide the generic detailing and then covered the vehicle with a sponging of watered down Vallejo German C. Beige, but I think it has over darkened things, so that a little vibrancy has been lost.

My sister webspace COMMANDERS is being re-configured to showcase various figure and boardgame systems that I am enjoying, while also giving a flavour of current ongoing projects. Link.

The most recent 'reinforcements' post on the blog. LINK