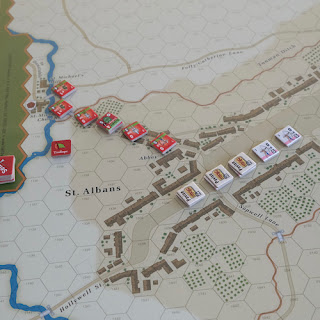 There are quite a few special rules to this scenario to impart flavour, which it does.

Both sides had potentially big armies (Towton would be fought shortly after), but the Yorkists were strung out and in consequence, only Neville starts on the map, with restrictions on when Warwick's Battle can arrive and their third formation does not make it at all to the battlefield within the time frame of the game.

The Lancastrians have a small advanced Battle (Trollope) already on the table, engaged with a detachment of Yorkist archers in the middle of the town.

Once Trollope deals with these, he can signal to the main army to enter play. These formations are large and each takes time to 'snake' onto the battlefield and there really isn't enough time for the Lancastrians to wait for each Battle to arrive and form us as a cohesive army, the situation demands that as each battle arrive, they are thrown into action.

The Lancastrian Men-at-Arms are allowed to arrive mounted, so they have the potential to penetrate the battlefield quickly, but this is dependent upon them scoring their activation number each round and ultimately, they will need their infantry support that is following up.

It is a dynamic situation. Which side can get into action 'the fastest with the mostest' and which Battles will reach their Flight (read break) Points first? - though the scenario, just as the battle, is weighted against the Yorkist.

Please use the 'read more' tab for the rest of this post which covers the highlights of the game.

Below - the at start set-up, note the Yorkist spiked nets and caltrop defences amongst the hedges in the top right. Neville's Battle sits below them, organising itself from disorder (representing breaking their encampment). 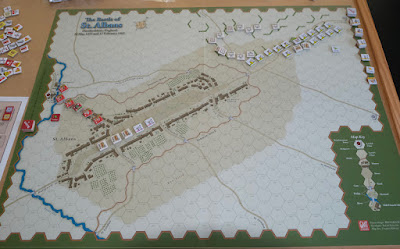 Below - Trollope (red) weaves his battle through the town's streets and attacks the archer detachment (white). He is initially repulsed, but in a second assault, he brings up his own archers, working on the enemy right flank and suffering heavy casualties, the archers flee the battlefield. 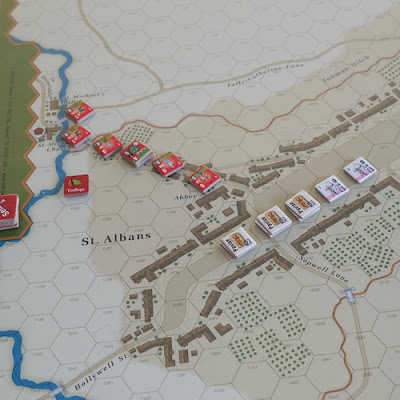 Trollope loses his levy troops to a vigorous pursuit of the enemy archers. One is lost and the other will not return. He forms up his remaining troops across the town centre near Shropshire Lane, while he rides back to St. Michaels Church to signal that the way is clear for the main army to follow.

Below - Exeter (Lancastrian - red) is the first Lancastrian Battle to arrive. His mounted Men-at-Arms push around the top (north) of the town, towards the hedges, where Neville's men have laid traps in the form of spiked nets and caltrops. 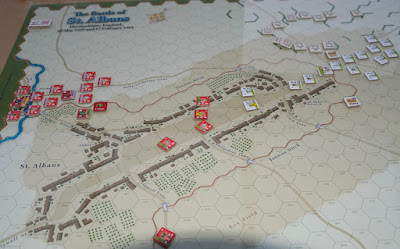 Neville (Yorkist) has already got his Battle mobilised and started moving into the town. His first contact is an archery duel between two contingents (centre of above map), but the initial contact is also the trigger for Warwicks Battle (off map) to roll dice for arrival times.

With Exeter's Battle fully on the map, Shrewsbury is the next Lancastrian Battle to enter play. His orders are to cut through the town and exit on the open ground on the lower side (south). This will see Exeter and Shrewsbury advancing on either side of the town, but Shrewsbury's advance is very tardy.

[game note - Exeter has a very low activation number, so to ensure he moves, I give him the first free automatic activation each round. Then under the continuation rules, another friendly Battle can 'try' to activate by rolling against their activation number. The result is that to keep Exeter moving, Shrewsbury is always left to test for activation, which he can fail to activate ..... and today that is happening a lot!].

Their only saving grace is that Warwick appears equally slow in getting his forces moving.

Below - At the top of the town, Exeter (red) starts to get his (now dismounted) troops involved in  the messy business of fighting amongst hedges, spiked nets and caltrops. He is getting the upper hand .... but it is a slow, arduous business. 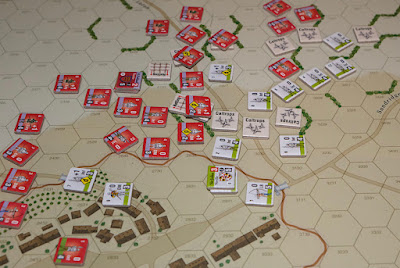 In the town itself, Trollope is keeping Yorkist troops under pressure, who's situation is not helped when the Kentish contingent, commanded by Captain Lovelace, treacherously abandons the Yorkist cause.

Regardless of that Yorkist set back, their resilient stand in the town inflicts great loss on Trollope, who's small Battle breaks and flees.

Below - To the south of the town in the open ground, Shrewsbury's and Warwick's mounted cavalry clash with charge and counter-charge. Warwick initially seems to to be getting the best of it, as the situation develops into a swirling cavalry battle, with the respective infantry forces making best speed to try and reach the fight and sway the battle one way or the other. 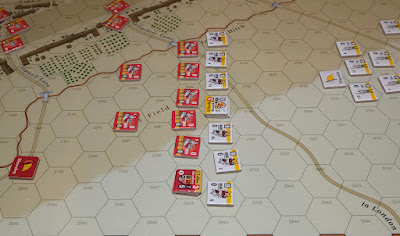 Losses start to mount as individual units first go disordered and then with cohesion lost, start to take heavy losses. The infantry from both sides start to feed into the clash, but the 'tail' of Shrewsbury's Battle is longer, with about twice as many troops as Warwick, so Warwick has an urgent task of defeating the enemy's best troops, before all of the Lancastrian forces reach the fight.

Below - Despite their successes, Warrick's front line becomes overwhelmed. Shrewsbury's archers start to form up on the other side of Tonman's Ditch and their shooting unhorses one of the Men-at-Arms contingents. 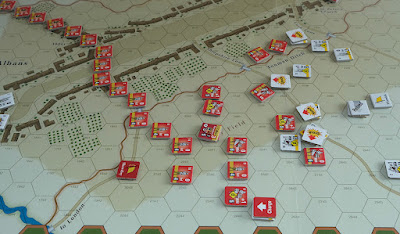 Beaten back, Warwick does not have enough strength to launch another attack. Up by the hedges, the Lancastrians have at last broken through the defences and Nevilles remaining troops are getting roughly handled, taking many casualties.

It is now very obvious that Neville and Warwick will spend all of their activations retreating. This coincides with the Flight Track now at the point in which after every free activation, the sides roll to see if their army flees and the Yorkist army is in that zone where the dice will determine how long they can carry on retreating before they are forced to flee.

With the situation reaching such an obvious conclusion, I call the game.

This is a fairly long scenario, more-so because it takes a while for the armies to actually get to grips with each other.

If the Yorkists can get the Lancastrian Flight score (through losses) up to 20, then the Yorkists can start to withdraw Neville with a chance to recover some victory by being able to claim they have saved their army.

It does however seem to be a scenario that favours the Lancastrian, but even so, the Yorkist player gets a good game, for while ever the game is in motion, both sides are equally drawn in to the play with the nuances that go on down at the hex level.

The system works off a D10, which often in games can produce chance swings that can seem too severe, but here, the range of outcomes is fairly tight by the first loss generally degrading the unit to 'disorder' status and then it is disordered units that can suffer badly (they get a chance to recover from disorder), so this need to harm a unit twice before it is detrimentally harmed does dampen down the D10 effect as indeed does the fact that 0 (zero) counts as zero and not 10 in this system and this lowering of the die value by a factor of 10% dampens down effect.

This is a 'series' game and this bundle (the deluxe 2019 reprint of three different modules combined) is giving a total of 20 scenarios, so that is a lot of play reward for learning one rule book.

EDIT - played the scenario again tonight, but face-to-face this time and things panned out rather differently, with the Yorkists having a much more successful game. Warwick moved up onto the top right of the map and directly supported Neville, who was already giving Exeter a hard time. The Lancastrians continually rolled poorly for secondary activations and so Shrewsbury was very late and hadn't got close to the action by the time we called it. A worthy scenario to re-visit.

I run a sister webspace called COMMANDERS, which may interest you. LINK

There is another blog article here about Bosworth, using this system. LINK