The assault on ‘Epic’ Bridge! 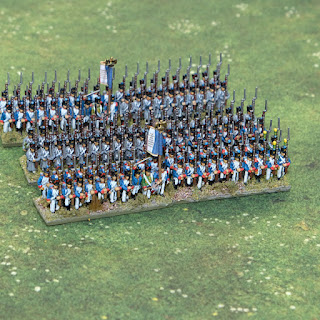 A few posts ago (there is a link at foot of this post) I put forward the outline of a multi-period scenario that involved the taking of a bridge over an uncrossable river as the objective.

As part of developing the scenario, today I am running it with a twist. For each unit in the original scenario, I will convert it over to a 3 unit brigade and the artillery unit will become three batteries for allocation to the brigades. Collectively this will put a couple of big divisions onto the table.

To get this to fit the 6’ x 3½’ table, Warlord Games Epic Napoleonics are in play with each individual battalion / battery being represented by just two bases. Moving the order-of-battle up to a level of around six brigades per side, allows me to use the Valour and Fortitude rules by Jervis Johnson which I like and they are hosted for free on the Perry Miniatures site.

I will be using Prussian forces (in black plastic) and French forces (in blue plastic). These are being slowly painted, so today, the few already painted infantry bases will indicate the ‘elite’ formation included in the scenario for each side, just as an easy visual marker.

Pre-game, as per the original scenario, I diced for each side to see whether they would gain or lose a unit or just keep the same strength. This adds a variable to what are otherwise mirror forces. Both sides lost a regular infantry unit (or in our case today - a brigade).

Having brigades on the table, highlights the sense of compression / containment to the army that chooses to set up behind the river, which has a smaller deployment area, but has the advantage that the uncrossable river refuses their right flank and being an important consideration because both sides will get a flanking reinforcement at some point.

Another twist that I have added is that the reinforcement must be the cavalry. This just reflects that sense of a mobile action occurring on the flanks of this battlefield and that troops that spill over from adjacent fighting onto our battlefield will be cavalry.

Anyway, 50% losses to one side halts the game and at that point, the winner is the side that can claim to hold both ends of the bridge, anything else is a draw.

A brief overview of the action.

It was a very enjoyable game, with highlights of importance as follows;

French guns concentrate on their left, with one battery up on the hill, they dominate this part of the battlefield, putting the Prussians behind the river under a lot of hurt. 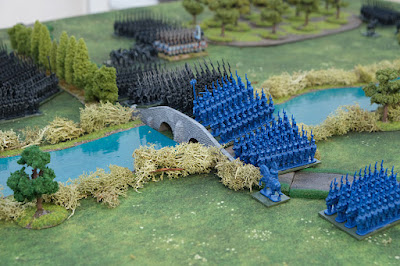 Above - The French take the bridge, but the Prussians make an immediate and successful counter attack, regaining their end of the bridge. 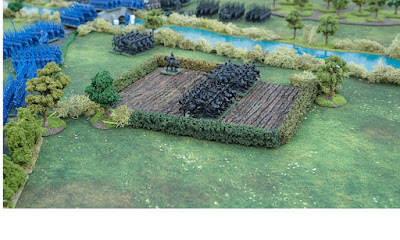 Above - The Prussian cavalry reinforcement (3 regiments in black plastic to the right) arrives on the battlefield on the French right flank, intending to isolate the French end of the bridge and to support the Prussian counter-attack there. 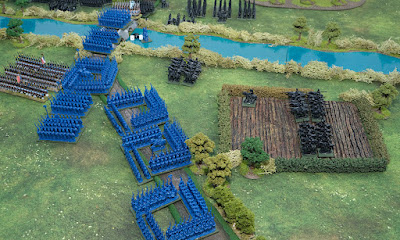 Above - This heavily distracted the French, forcing much of their right wing to go into square and a cavalry Vs square contest ensued …. supported by Prussian artillery from the other side of the river. 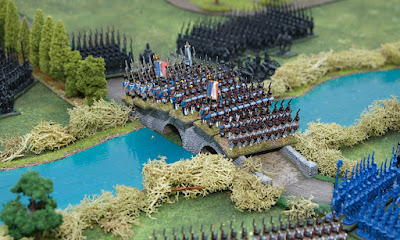 Above - While the Prussian cavalry kept the French reserve tied down, the fight at the bridge continued with neither side giving ground. 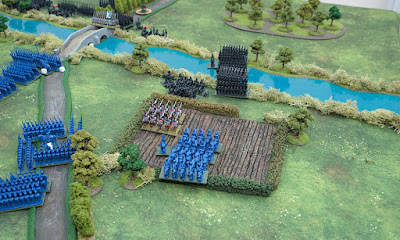 Above - Though a couple of the squares wavered, due as much to artillery fire as the cavalry, the Prussian cavalry were eventually beaten back to the river’s edge with heavy losses (losing two regiments). With their backs to the river, they could see the ominous presence of French Dragoons in force moving towards them. But then, Lady Luck struck, very nearby, a Prussian brigade had found a ford (see scenario tweaks below) and were sending troops across to the far bank to support the cavalry.

But the French dragoons were all over them before the infantry brigade could fully cross the river. Their 1st Regiment went into square on the river bank, but with the dragoons destroying the last of the Prussian cavalry, the French cavalry were able to keep the Prussians in check and something of a stalemate was developing across the field!

Both sides were becoming exhausted and neither side were making any headway at the bridge. Then the moment in time came when the game had to be called because one side had reached 50% loss, it was the Prussians who had lost the most units, but in truth, the French were not far behind, it was that close.

However, the only thing that matters in the scenario is control of the bridge and at the point of calling the game, each side held their own respective ends of the bridge …. so a draw was called and looking at the situation, that felt about right.

Mid game, I added a rule to the scenario, which allows for the exploring for a hidden ford to open the game up and create a new dynamic, giving a reason for troops to deploy further along the river bank, away from the bridge.

As a provisional rule I tried this - At the very start of a player’s turn (or first activation depending on your rules), a unit that is touching the river bank can test to see whether they have discovered a fording point. A ford cannot be discovered within 12” to either side of the bridge.

Roll a d6 and on a result of 1 or 2 a ford has been found. Each player can only ever make two such attempts (across any two separate turns) of discovery during a game and once a ford has been located, further tests cannot be made (i.e. there can only ever be one ford …… if there is one to be found at all!).

I thought this worked quite well and if the rule had been introduced at the start of the scenario, there would likely have been every chance of the focus for new action, threat and counter-threat to be created at the other end of the table (the quiet end!).

The scenario seems to be working well and re-running it with the ‘ford discovery’ rule available from the start would certainly bring the early stages of the game onto a different path as both sides try to take advantage of a potential ford crossing …. or perhaps more importantly preventing the other player from gaining such an advantage at their chosen point!

There is now enough going on here to keep some freshness and  allow for another re-run. The testing to see if forces are gained or lost at the outset, the possibility of finding a ford and the randomness of the cavalry arrival, all contribute to that.

As an aside, I think that overall, the upscaling of the action to the divisional level worked quite well.

A post by fellow blogger (Mark N) of the ‘My Brave Fusiliers!’ blog, who has had a go at the original form of the scenario (thank you). LINK