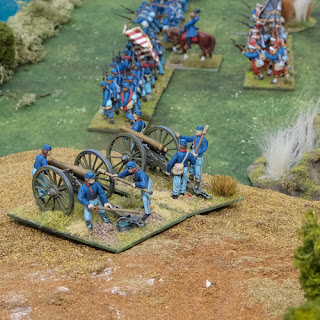 There was a time when teaser sized / type scenarios were a staple of both wargame books and magazines, but that seems less so these days.

Perhaps they have simply been replaced by those ‘similar’ scenarios that we commonly see now for Sharpe Practice, Lion Rampant, Rebels & Patriots, The Men Who Would Be Kings or Bolt Action type rules, that have a sort of mission based plot.

Anyway, I thought I might create a group of around four scenarios, that work with a 6’ x 4’, small forces and multi periods, which I can refine through play testing and then have them on stand-by for mid-week throw down style games.

For the first, an impassable river with a bridge has just gone onto the drawing board and to see how it works with mirror forces, I placed out the ‘Pocket Armies’ ACW collection.

I laid out a workable table and then sketched it onto the iPad. 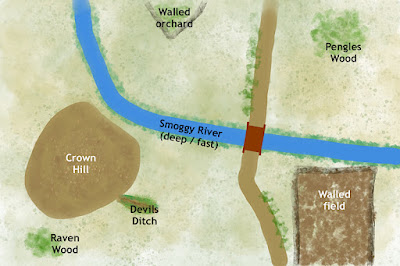 The bridge is obviously the focal point of the scenario. I suppose I should give it a name!

Above - In real life, it looks very much like this. 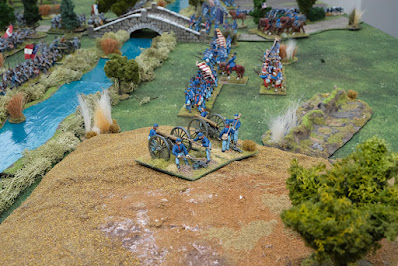 At start, both sides have the same units, these being; 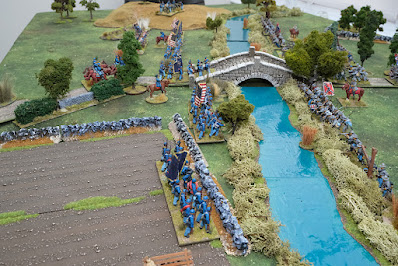 All units except one, start the game by being set up anywhere along their baseline and up to 4” in from the edge. See special rules for the one unit that does not begin play on the table.

The game will end the moment one of the forces loses 50% of their units.  At that time check to see which player controls the bridge (defined below) to establish a winner. 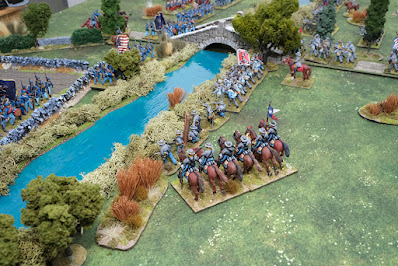 The river is only cross-able via the bridge In a modern setting, amphibious capable vehicles cannot be used to cross the water.

The ditch counts as a linear obstacle and provides cover when attacked frontally.

One unit from each side will not be set-up on the table at start. That unit is off table manoeuvring on the flank. Starting on turn 2 and on each subsequent turn, at the start of their turn, a player will roll a D6 on and a score less than the current turn number, their reinforcement will arrive along either of the short edges of the table.

The player chooses which end of the table the unit will come on and at what point, so it can arrive on the enemy flank or the player might prefer it to arrive on their own flank as a reinforcement to shore up their own position. The reinforcement is given its own commander, who will be of average quality.

The armies will set up on their baseline (one of the wide table edges) and before play, both players will each roll a D6 adding +1 if they have chosen elite cavalry. The winner chooses which of the two table edges they will play from. Re-roll equal modified scores. 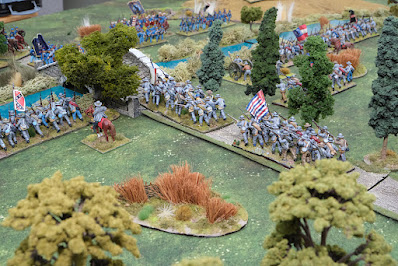 Winning - This is a meeting engagement and victory will be based upon the capture of the bridge. Once the game is called, based on a side suffering 50% casualties, check who controls the bridge. Controlling both ends of the bridge (i.e. the road bit at each end) will be classed as a win, anything else is a draw. 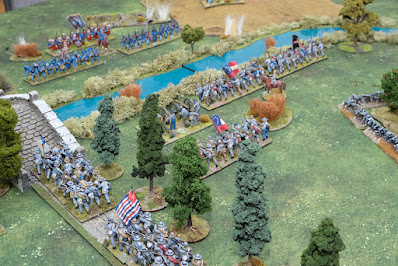 The above is just the basic layout of a scenario idea. It looks like a good start and some continued tweaking by playing a couple of Horse & Musket and WWII games will help refine it. 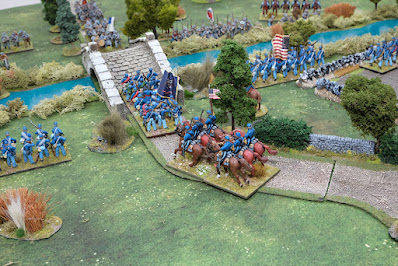 Being able to pick which side of the table to have as your baseline not only needs thought about terrain related to the bridge capture, but also as to where the reinforcement will arrive, as that bend in the river effectively refuses the flank to units without ranged weapons.

Note the term ‘unit’ is loosely used, allowing players to choose the sort of game they want. So in a WWII game, a cavalry unit might be a single tank or we might be using units as platoons, in which case it might be 3 - 5 vehicles and therefore an infantry unit would be a platoon with three sections.

The whole point of doing this is that I get something of a fast play ‘throw down’ game, that has a modicum of being successful due to it having been refined over several playings. 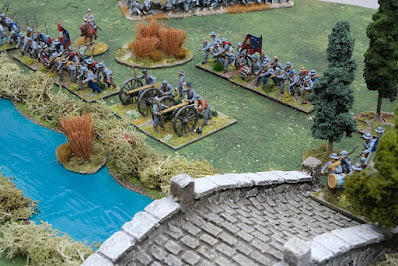 I will review all of this in a few months time and do an update if the play and tweaking proves interesting enough. 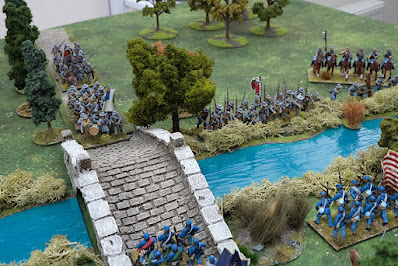 I am a couple of playtests in now and a bit more development has be exploring the addition of a hidden ford to open the game up and create a new dynamic and give reason for troops to be deployed further along the bank.

Provisional Rule - At very start of a turn, a unit that is touching the river bank can test to see whether they have discovered a fordable part of the river. A ford cannot be discovered within 12” to either side of the bridge.

I will be trying this is the next few games ….. If a ford even gets found!

My sister webspace ‘COMMANDERS’ is being re-configured to showcase various figure and boardgame systems that I am enjoying and gives a flavour of where current ongoing projects are up to. LINK