We continue the series of scenarios in Dark July, the Lock ‘n Load’s boardgame module that covers the tactical level fighting in the region just west of Prokhorovka and specifically at the Oktiabrski State Farm and Hill 252.2 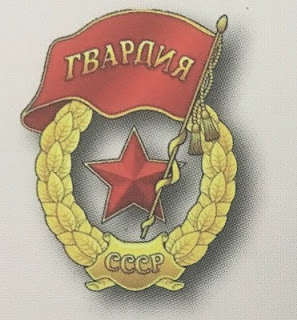 At 10.15 A.M. elements of the 1st SS Panzergrenadier Division LAH were ordered to advance and take the anti-tank ditches to the east of Hill 252.2. The attack was launched in an attempt to clear out the anti-tank ditches and the surrounding area to the south of Hill 252.2, for once obtained, these positions could be used to support the assault on the Oktiabrskii State Farm. (Scenario design by Juan Carlos Cebrian).


The Forces.
The Soviet side. have an order of battle similar to the previous scenario,  except that the two emplaced T-34’s are swapped out for a single emplaced KV-1, which is tank with good armour. Commissar Ilvanich is on hand this scenario to provide suitable encouragement.

The German side likewise have a similar order of battle to the previous scenario, though without a Tiger I tank this time, this alone will make for a different and interesting game as the Germans should have to work much harder to deal with that KV-1.

Only the Germans get off-board artillery this time, it is a single Fire Mission with an attack value of 5.

The game.
To win the Germans must control the end of the dirt track and the adjacent end ditch hex (bottom of the map), plus they must also control the majority of the remaining ditch hexes. The scenario special rule is that the anti-tank ditch is treated exactly like a trench, except they are impassable for tanks, which will prevent making the easy overruns that the last scenario gave.

The German forces start more-or-less with Riener behind Hill 252.2, 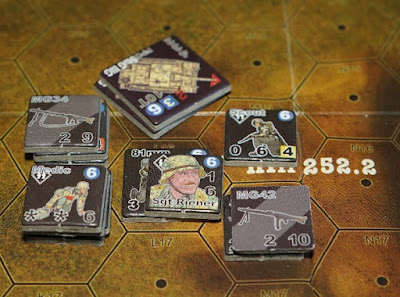 and Colonel Kerner behind the lower woods. 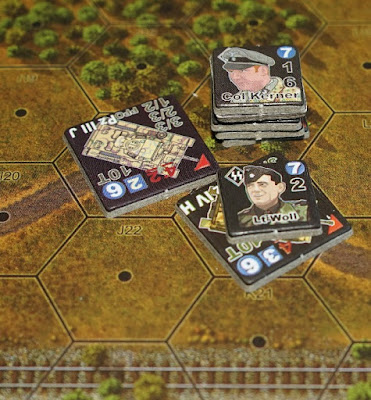 The Soviet defences rely on Airborne Company, 2nd Battalion, 26th Guards Airborne Regiment, supported by an emplaced KV-1.  They set up mostly in the anti-tank ditch, but choose to put the 45mm Anti Tank gun and the emplaced the KV-1 immediately behind that line in new trenches from their scenario allowance. 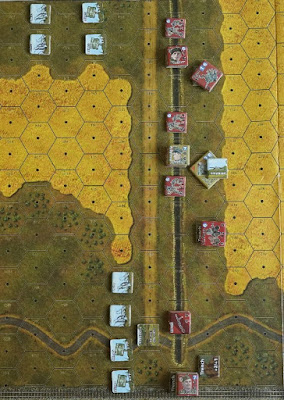 Thoughts at this stage are that the Germans should use the rail track to unhinge the defence, because of the two compulsory victory objective hexes located at the end of the ditch / roadblock and also to use the wheat field to avoid the wire and mines. For the Soviet side, the line feels very thinly held and a betting man might not fancy their chances. Squads may have to run up and down that anti-tank ditch to assist any crisis points that develop. 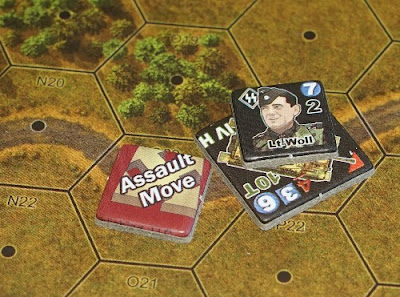 Turn 1
Lt. Woll with his leadership rating of 2, puts him as something of a Panzer Ace. His Panzer IV assault moves forward, halts and attempts to spot for a HMG, but can’t see anything. Moments later the chatter of a Soviet 12.7mm HMG opens up at Riener’s men, who are moving down into the wheat field. Riener dives to the ground, shaken, while the two squads with him take casualties. To make matters worse, their position is raked by light machine gun crossfire from the Soviet right, Riener is wounded and he loses both his squads. This is the cost of under-estimating the defence. That HMG is going to have to be dealt with if the infantry are going to stand any chance of closing.

Turn 2
Woll from his Panzer IV spots the HMG and puts both shell and machine gun fire into the position, with devastating accuracy, the HMG is silenced.

The scout has now found a position on the hill from which to call down artillery fire. The centre of the Soviet position is targeted, but drift sees the stonk  arrive to the left, catching the 45mm anti-tank gun and Lt. Filitov’s men. Filitov is wounded and the gun crew shaken as they dive for cover.

Turn 3
On their right, the Germans press forward, there is no choice other than to cross the mines if they are to take the objective, which the infantry do surprising successfully. The Panzer III closes in to give supporting fire, while Kerner and two squads move up, crouching behind the moving tank.

The KV-1 and two StuG’s continue trading shots, with the latter unlucky enough to hit the earth  emplacement rather than the KV’s turret.

Turn 4
The scout on the hill starts to direct the fire of the 81mm mortar team to support the German attack on the right. The MG42 has also set up on the hill and is firing into the ditch as the defenders expose themselves. 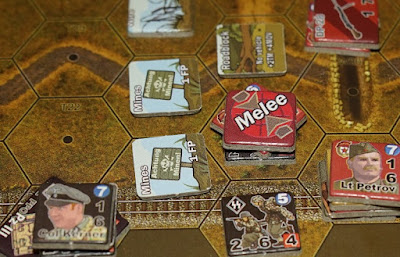 Having breached the mines on their right, two of Kerner’s squads advance towards Lt. Petrov’s position at the end of the ditch. A Soviet Airborne squad seizes the moment, climbs out of the anti-tank ditch and runs out to engage one of the enemy squads in close combat. Both squads go to ground, fighting for the slightest advantage, but their firefight goes on, unresolved.

Turn 5
Kerner gets more squads through the mines and directly assaults Lt. Petrov’s position. In desperate fighting, both sides inflicted such serious losses on each other, that neither force remained effective. Commissar Ilvanich ran along the ditch from the centre to rally the survivors at the lower end of the ditch. The MG 42 on the hill got fleeting glimpses of his 200 metre dash, but even the rapid fire of their Spandau could not deter him.

A StuG finally got a turret hit on the KV and knocked it out, which was immediately followed by return fire from the 47mm anti-tank gun, which got a lucky knock out against the StuG frontal armour. The fighting from both sides had become very determined as it looked increasingly likely the defenders might just be able to hold out.

Turn 6
With the scout on the hill seeming to have some sort of communications problem, the 81mm mortar team decided to move from cover and get up onto the high ground, so that they could fire over open sights. 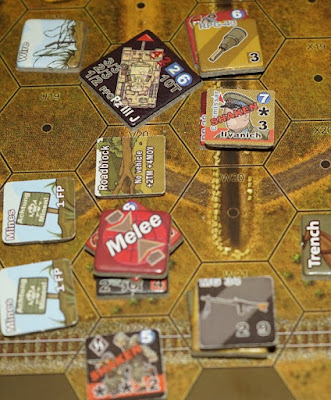 Note, the bottom right hex with the LMG is actually vacant, they are just the dropped weapons from the close combat with Petrov.

At the lower end of the ditch, close fighting continued, with neither side gaining the advantage. The Panzer III inched forwards nearer to the ditch, a mistake as a RPG-43 armed squad ran down the ditch to get close to the tank, but in the last moments, they must have seen something to cause them to lose their nerve and instead they stayed in the ditch, hugging its banks. 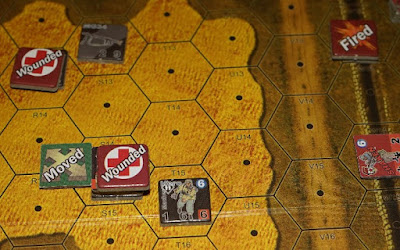 Turn 7
With the attack on the left stalling, the wounded Sergeant Riener ordered his men forward, to at least get out of the open and into the ditch. A light machine gun raked the wheat field and Riener’s men again halted - all except Private Macher, who alone and with abandon, continued to run, throwing himself into the ditch and taking out a surprised group of men who had been sheltering at its bottom.

Turn 8
By now, the group carrying the RPG-43 had recovered there breath. They scrambled up the side of the ditch and attacked the Panzer III from its blind side, leaving it burning, which coincided with the nearby German infantry being dispersed by other defenders. The attack in that sector was definitely over. This just left the remnants of Riener’s men in the wheat field to make one last effort, they just about made it into the ditch, though Private Macher was already on his feet running along the ditch, looking for more easy prey, but instead, having pushed his luck too far, he  ran into a squad that were ready to deal with enemy infiltration.

The attack had run out of steam and while the defenders had hung onto their position, it had felt a perilously close affair at times.

Conclusions
At the final count, the Germans had failed to take the two compulsory victory hexes at the bottom of the ditch line and had only managed to occupy three of the ditch hexes further up. At the start of play, the Germans have the potential firepower of four tanks, one mortar team, one fire mission and one HMG, which leaves me feeling that more could have been done in the first three turns to weaken the defences with suppressive fire, before exposing the infantry.

The German cause was not helped by the atrocious rolling of the scout for spotting, he should be generally good at that ....... but if you keep on rolling sixes!

Next up, Scenario 3, Secure the Oktiabrskii State Farm. The Germans use Hill 252.2 and the anti-tank trench to make their attack on the farm above them. Two of the farm buildings are fortified - interesting.

I have only read another 19 pages (which perhaps tells its own tale) and so the narrative is still dealing with Operation Barbarossa and the opening months of the war. I did pick up the August 2018 issue of The Armourer from the newsagent, not my usual purchase, but it has ‘The Battle of Kursk’ emblazoned over its front and the illustration has been done will oil paints, something I fancy a dabble with.

RESOURCES
LINK to the previous post that describes a playing of scenario 1 - the fight for Hill 252.2
http://battlefieldswarriors.blogspot.com/2018/07/kursk-month-assault-on-hill-2522.html

LINK to the post that covers the next scenario, the fight for Oktiabrskii State Farm.
http://battlefieldswarriors.blogspot.com/2018/07/kursk-month-secure-oktiabrskii-state.html