Another scenario from ‘Dark July’, the Lock ‘n Load boardgame module that covers the tactical level fighting in the region just west of Prokhorovka and specifically at the Oktiabrski State Farm and Hill 252.2, but also includes a Ponyri scenario. 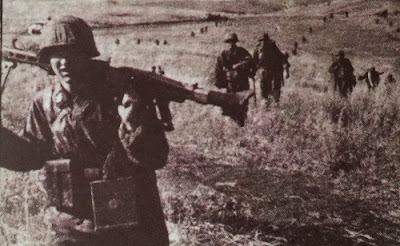 
Scenario Background - (Road to Prokhorovka) Near Prokhorovka, 12th July 1943.
At 6 A.M. on the morning of 12th July, the leading elements of the 1st SS Panzergrenadier Division were gathering for an advance towards Prokhorovka. Remnants of the 26th Guards Airborne Regiment were preparing a last line of defence to bar the way. Even with the help of a KV-1 and a T-34 from 57th Heavy Tank Regiment, the Soviets hoped, at best, to delay the Germans. (Scenario design by Juan Carlos Cebrian).


Initial thoughts.
The way the opening scenario background information reads, I might be forgiven for thinking that this scenario is going to be pro-German - but somehow, I doubt that, given the tough job they have had so far.

We are playing on the bottom right quarter of the map, which essentially gives us the Prokhorovka road and the Germans win by controlling a cluster of three hexes at the exit point of the road. It seems sensible that the Soviets should set up a collapsing defence that will fall back onto this point, so no matter how many casualties they take they will always have those three hexes occupied or covered in one way or another towards the end game.

This looks to be a grinding action with a narrow focus, as while the objective is to capture three hexes, doing that necessitates destruction of the Soviet force as this is pretty much a last man standing type scenario as far as the defenders are concerned. There are 7 rather than 8 turns, so there is going to be a bit of a ‘hurry up’ dimension to this.

The Forces.
The Soviet side again have good quality troops and two leaders. To strengthen their position, they get 2 mines, 3 roadblocks, 3 trenches and 3 wire. They have a sniper counter, so may be able to spring a useful surprise at some critical point. For gun tubes they have a 76mm A/T gun, an emplaced T-34 and a KV-1, but three Armour Piercing capable guns against 6 attacking German tanks, means that they will have their work cut out for them. By 1943, the up-gunning of most German vehicles means that the KV-1 does not have the ’pill-box’ type attributes that it had when first encountered in 1941 - ‘42.

The German side get 8 infantry squads, which will likely use the thin sliver of woodland next to the road to cover their advance, plus 2 assault guns and 2 tanks, which on the opening turns, may well have their hands full with gun duels. On Turn 3, Lt. Woll, a Tiger and a Panzer III enter play, no doubt intended to give new energy to the assault, with the Tiger ensuring that any defending armour still surviving, has something to worry about.

Only the Germans get an off-board Fire Mission. 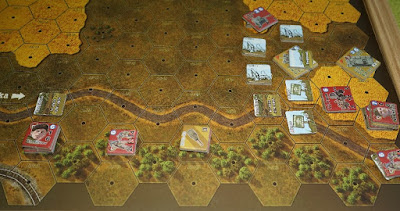 The Soviets have to set-up within 6 hexes of AJ20, which does at least allow them to defend the woods and set up a perimeter to guard their flank. For good or for bad, I choose to set them up to defend in depth in the woods, with crumple zones to absorb the attack that will likely culminate in the final victory hexes being hard fought over, with hopefully the game ending before the Germans can achieve their full conditions. The mines, trenches, wire and roadblock are used in and around the three victory objective hexes.

The Germans must set up in a linear position, lined up on the Soviet side of the anti-ditch line that was fought over in scenario 2. This gives them scope to swing around and come down on top of the Soviet positions, while also making a frontal assault along the axis of the road / woods. 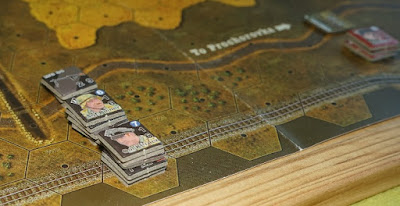 The infantry group under Kerner and Riener are crammed tightly in front of the woods. They have a scout with them, who will help reduce the movement cost in the woods of those stacked with him. There is confidence that this powerful force will quickly push through the woodland to get to the objective. 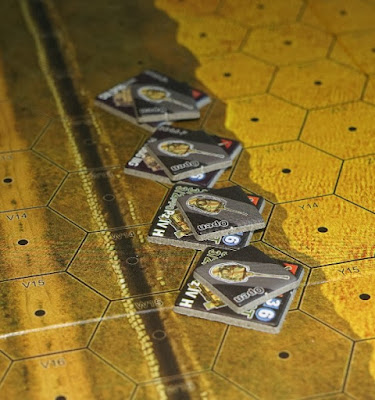 Two Panzer IV’s and two StuG’s start well placed to enter a gun duel with the Soviet defences at the objective hexes. The long range favours the German gunnery. 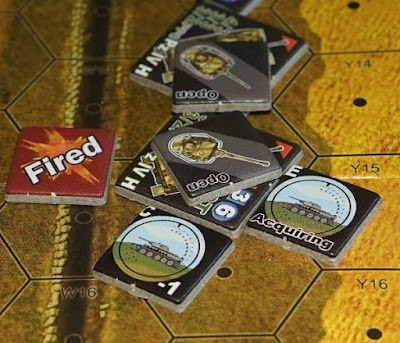 Turn 1
The German vehicles go open turreted for observational advantages. The benefit of that is immediately obvious in the opening shot as a Panzer IV hits the emplaced T-34 in the turret, but the glancing blow does not do any damage. The T-34 replies and misses, but their machine guns spatter across the thick skin of the Panzer IV, giving their exposed crew a bit of a stir!

Colonel Kerner’s company go into open order and begin their advance towards the woods. 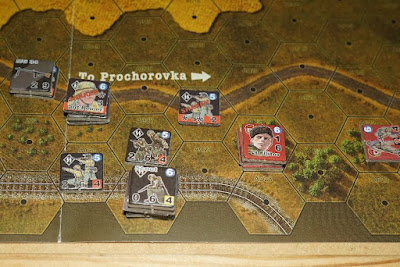 Turn 2
Kerner's company get badly chewed up covering the first 150 metres, from the fire of Lt. Filitov and his team sitting at the woods edge.

Turn 3
A Panzer IV knocks out the emplaced T-34. Frustrated by their poor gunnery, the KV-1 opens their hatches and the better view immediately brings results as a Panzer IV erupts into flames.


Kerner, who’s assault has ground to a halt, is relieved to hear the heavy clank of tracks behind him as Tiger with it’s Panzer III chaperone join him to give their support. The 88mm cannon blasts away at the woods, wounding Filitov and shaking his men, who pull back deeper into the woods.

Turn 4
It already feels like the timetable is slipping away from the Germans and junior officers urge their men on. Kerners infantry group push into the woods taking Filitov and the remnants of his section, while the StuG’s move up to prepare to overrun the objective hexes once their infantry move out of the bottom of the woods.

Turn 5
Lt. Woll guides his Tiger’s gunner to the KV-1. At 750 metres, the Soviet tank is silenced. The German scout moves out from the woods into the open, to bring down artillery on the objective area. Spotted by the Soviet HMG, a hail of fire distracts the scout enough that his rushed job at calling in the artillery results in ineffective fire. 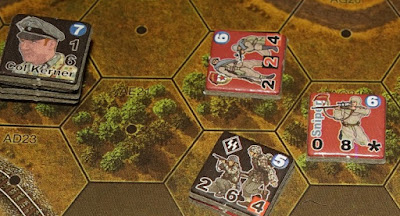 A soviet sniper pops up in the woods, just 50 metres away from one of Kerner’s squads, shocked the unit takes casualties and hits the ground. The woods have turned into a terrible obstacle for the Germans, what started as a confident advance has become an embroiled engagement.

Turn 6
The Tiger moves forward, firing into the tree-line and part clearing the defence, while the StuGs move on ready to overrun the objective. 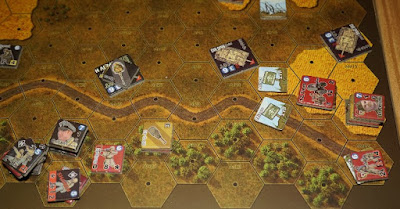 I never usually call a game early, but it is obvious that the Germans simply cannot win or even get close to demonstrating mastery of the scenario. The StuGs might well be able to overrun two of the three objective hexes and in this scenario, vehicle are allowed to control hexes, but the third victory hex is on the exit road and that contains a roadblock, a feature that prevents vehicles entering the hex, so this must be captured by infantry and they are still somewhat locked down in the woods and will never be able to reach the objective in time.

Conclusions.
The module continues to deliver quite different situations at it progresses through the various scenarios. On this occasion, just looking at the map and forces, I was certain that this seemed an easy German scenario, but clearly the designer has crafted an intriguing situation, though I am not sure how differently I would approach it the second time around, perhaps I might get the tank units up closer to the objectives to get a higher chance of spotting / hits, but doing that would probably required them to be buttoned up for protection from machine gun fire and that would making spotting of those units in trenches harder. Perhaps leap-frogging the tanks / assault guns forward would give the better attack.

Either way, in a 7 turn scenario, the Germans need to have more dynamic movement that I was giving them if they are to clear the objective hexes.

We are doing the 'Midday's Counterattack' Scenario next. This gives a flavour of the big tank battle and uses the full map and you just ignore the anti - tank ditch . For that game, I will likely bring my larger X-Maps out, to add to the spectacle of the big battle and also give a better sense of ranged fire of the powerful tank guns as the larger distances across the map will give a different visual perspective.

Reading.
Kursk - The Greatest Battle, Eastern Front 1943 by Lloyd Clark and published by Headline Review. At last (I am now at page 196) the book is talking about the immediate lead up to Kursk (Feb to July) and takes account of the fact that the offensive was meant to start in early May, but postponement meant that all the advantages of an early attack were lost and the Soviet level of preparedness increased. This part of the book also covers the transformation in Soviet forces that were able to co-ordinate offensive manoeuvres with greater efficiency and confidence and it sets the scene of Kursk being a useful watershed to show how material productivity, the war economy and strategic initiative were moving increasingly to Soviet favour. 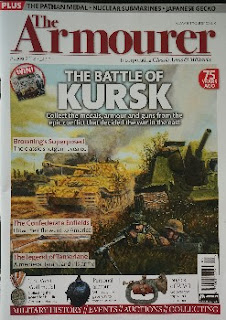 This month the Armourer magazine has a Kursk article and a discussion armour about the tanks at Kursk. They are fairly short overview articles, but are well supported by photographs and the rest of the magazine gives a good read.

RESOURCES
Link to the next post, which is a figures on hex game.
http://battlefieldswarriors.blogspot.com/2018/07/kursk-month-breaking-line.html

LINK to the previous post that describes a playing of scenario 3 - Secure the Oktiabrskii State Farm LINK
http://battlefieldswarriors.blogspot.com/2018/07/kursk-month-secure-oktiabrskii-state.html