I am back at this, being somewhat inspired by what Matt Crump has been doing over on his blog, (‘Wargames in the Dungeon’ the link is in the resource Section Below), so here we go again, but this time with a couple of changes in process that will hopefully allow more success this time at seeing this project through ..... I mean how hard can it be :-) 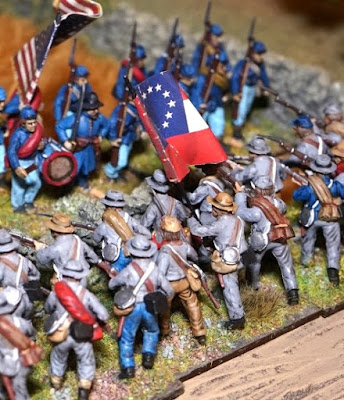 This post discusses yet another attempt to get the game set done and presents a first action, which itself gives a grateful nod to the world of blogging.


Here is a quick reminder of what our box of goodies gives us. We have 4 infantry units, 1 cavalry unit, 1 artillery unit and 1 general per side, plus a bit of terrain, so this offers a nice opportunity for the visual to meet the practical in terms of attractive 28’s sitting in a small gaming space, with armies that are sized to ideally suit some quick play rules, which the box includes (called Firepower), but also fitting with popular sets such as Neil Thomas’ One Hour Wargaming rules, which uses 4 - 6 units per side in just a 3’ x 3’ space.

On returning to this project, it was good to open the box and see that four Confederate Regiments, one Union regiment and one Union artillery piece had already been painted and based. This leaves the rest of the Union’s three regiments (including one Zouave regiment), two generals, three artillery pieces, two cavalry units, fencing and a building to be put together, painted, based and otherwise made tasty!

A bag of eight metal casualties have been added to each side, figures that were picked up at the Phalanx wargame show from 1st Corps, together with some dice frames and 10mm dice bought from Warbases at the same show. I originally bought 7mm dice and frames, but these were too small for my banana fingers to pick them out from the MDF frames with any ease. The bigger dice are a bit more obtrusive - but they work for me.

Two significant changes are going to influence how this project moves forward. Firstly if I have something ready and primed on sticks, then I will paint most days until completed. My problem is that once done, unless there is something else already primed and ready to go, the painting momentum is lost and that stalling typically leads to fairly long spells of inactivity on the painting side of things.

To deal with that, I have glued up all the remaining box contents over a couple of days and temporarily attached the figures to their bases with a latex based glue, rather than going with my usual ‘must fully complete one unit at a time’ production line process, so now the army is prepped, available and also usable.

Another box of infantry has been bought with the intention of priming a unit of 18 and putting them on sticks. This allows always having one unit on sticks, which when completed can be cycled into the ‘on table’ collection and one of the unpainted bases removed and put through the painting process and hopefully seeing and using this ‘improving’ army will maintain painting motivation.

Secondly, if I spend a long time planning and prepping armies and rules for a project that can only produce a game many months into the future, then typically something else will come and grab my attention, so as a counter to that, while painting the figures, I will be gaming with them and the terrain, regardless as to what state they happen to be in - painted / unpainted / part constructed etc (I know that will offend some gamers eyes, but I have jumped that hurdle) so that interest is maintained and also allow for the developing of rules, scenarios, terrain and basing systems that will gently evolve to give the effect that I am after, hence the temporary basing.

So here we are, with our mix of goodies, plus suitable additional terrain items scavenged from the ‘wargame chest’, ready to put on the first game. Bloggers following here will no doubt be familiar with some of the objectives.

For rules, initially at least, we will use the fast play the ‘Firepower’ set that comes with the Perry box. The phasing player chooses an action for each unit, which are essentially move or charge or fire or rally. The system uses ‘hits’ and units in cover get the chance to make saving rolls against hits. As units take hits, they make morale checks, which relate to the casualty level, those that fail break and rout and are condemned to only being able to take a ‘rally’ actions as they flee.

Infantry units have 150mm frontages, artillery 100mm frontages and cavalry 120mm frontages. All movement rates are randomised by various combinations of dice. There are six scenarios provided with the Firepower rules, but for fun and a bit more blog involvement the following scenario was put together ..... so here is Scenario 7!

Battle at the Blogger Farms - 1863. This is a meeting engagement that will run until either side loses the will to fight on. General-Brigadier Stew, the Union Commander, has orders to secure Caveadsum Pike, but he is unaware that General-Brigadier Wall’s Brigade has already brought the road under Confederate control at Crump’s Farm. All 12 of the units, plus commanders provided in the Perry 28mm ACW Battle in a Box will be used.

There are five objectives that are each worth 1 victory point as follows;

The last player to have had sole occupation of Freitag Farm

The last player to have had sole occupation of Crump Farm

The last player to have had sole occupation of Prufrock Hill

The last player to have had sole occupation of Stonewall Field 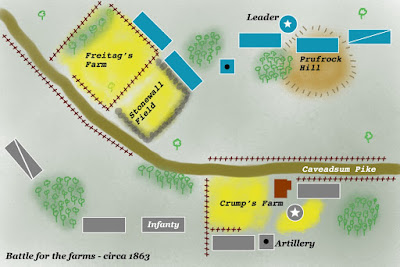 Battle opens with the artillery trading shots, with Bordurant's battery giving Gibson’s Battery (Confederate) the worst of it.

The Confederate left flank moves to take Freitag Farm and Stonewall Field, but sharp firing from the Union stop them in their tracks and both sides settle into long range musket fire that is mostly ineffective due to the wall boundaries.

To break the deadlock, 12th Ohio Pushes through a small copse and out into the gap between Stonewall Field and Crump Farm, surprising the Union centre. On their far left Rosser’s 5th Virginia Cavalry position themselves to envelop the Union flank, though that terrain is difficult to negotiate.

The boldness of 12th Ohio’s advance brings them into the hornets nest that is the Union centre, but they reform quickly and with superb fire discipline, put a devastating volley into 5th North Carolina. 30th Ohio are ordered up to support the attack and they cross the ploughed field at Crump Farm, taking up position at the roadside fence. They give well aimed fire, bracing their muskets on the fence, adding further discomfort to 5th North Carolina, who turn and flee.


Over on the Union left, 13th North Carolina move off Prufrock Hill and advance towards Caveadsum Pike, with Voss’ 12th Illinois Cavalry racing on ahead to take up positions at the roadside fencing, but intense Confederate fire forces the infantry to stall and then close to being wrecked as casualties rapidly mount, they fall back, leaving the cavalry isolated and who are themselves now forced to abandon the fence line. Fortunately General-Brigadier Stew happens to be on the reverse side of Prufrock Hill and he manages to rally the retreating troops, but they are too spent to make another attack and content themselves with holding the rear of the hill.


The Confederate push through the middle ground has quickly brought about a collapse in the Union centre and despite 23rd North Carolina taking Freitag Farm, without reserves, they are soon being enveloped as Rosser’s cavalry close down the flank positions.

With the rest of the Union brigade losing cohesion and taking heavy casualties, they are forced to pull back. Rosser’s cavalry breaks through the apple orchard in an effort to cut down the retreating troops, but becomes ensnared (random movement allowances) amongst thick undergrowth and only made it to the back line of fencing of the fields, before having to call off the pursuit.


By turn 7, the Union have no choice but to leave the field of battle. They have not crossed Caveadsum Pike and so only take 1 VP for being the last to occupy Prufrock Hill. The Confederates, with surprisingly light casualties, are the last to occupy Freitag Farm, Crump Farm and Stonewall Field, getting 3 VP’s, so a clear Confederate Victory.

If this had been part of a campaign game, the Confederates would be pleased with the results of this sharp action, while the Union might be grateful, having been outfought, that they had managed to preserve enough of the brigade to ensure its continued cohesion, though the loss of their guns would not doubt be felt in the coming days.

Overall an enjoyable first game that gives a taste of what could follow. Thank you to my cast of fellow bloggers for taking part :-)

In this system, since units either move or fire in turn, not both, so the player who takes on the responsibility of advancing and taking ground can suffer higher casualties at the hands of the player that gets more firing opportunities and with the forces being the same size and composition, this could cause some problems, yet here, the Confederate advance in the centre was a great success, while the Union advance on their left wing was a disaster.

It was an enjoyable table and game, so I will use the scenario again to check rule changes against it and also to run a Black Powder game and perhaps when the armies grow in size, have a dabble with my Pickett’s Charge rules, which have been sitting there for a year waiting for an excuse to try out the mechanics.

In the meantime, the building and the six built strips of Perry fencing have gone onto the painting tray to be ‘prettied up’. There are also four Renedra sections (not part of the ACW box) of plastic Cross & Rail fences with stone that have been part completed for around 5 months that have been dragged into this painting session. I need to get another 18 infantry glued up and primed to kick start the painting of units, so yesterday ......... I built two Tiger tanks instead! :-)

Here will get updated as appropriate when various completion milestones are reached - just like I said it would in 2015 and 2016 :-).

There will hopefully be more frequent coverage over on my Commanders web page (see resources below) as smaller project ‘victories’ occur.

My COMMANDERS web space will have regular updates LINK
https://commanders.simdif.com

Email ThisBlogThis!Share to TwitterShare to FacebookShare to Pinterest
Labels: 1/72nd and 28mm Project, Firepower rules, Perry battle in a box