I am presently working my way through a Battle of the Bulge campaign using the boardgame Bitter Woods by Randy Heller, matching day-by-day play with the actual campaign anniversary.


On turn 1, the German side got a very impressive breakthrough result at Hosingen, which gave an advance after combat that allowed them to push up through the natural choke point of Clervaux, giving them a significant opening in the campaign game. 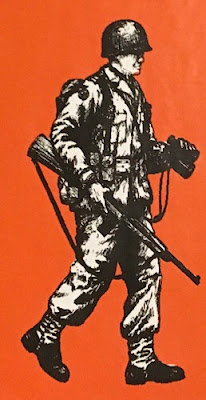 Browsing my ASLSK module 1 package, I noted a Hosingen Scenario and I thought it would make a good tie-in with my campaign gaming. I have also been reading Beevor’s Ardennes book, which is filled will accounts on small scale actions, so from an ‘immersing myself in this campaign’ point of view, now seems the ideal time to try this ASLSK scenario out.


The campaign game saw the 110th chased out of town! What will todays squad level replay deliver?


Please use the ‘read more’ table for the rest of this post.

In the ASLSK (Starter Kit 1) scenario, we are told that the American 110th Regiment has positions along the frontline between the Our and Clerf Rivers that were characterised as a series of strongpoints. One such strongpoint being at Hosingen, where elements of K and M companies (3rd Battalion), supported by elements of 103rd Engineers Combat battalion, were ensconced.  Shortly after 0730 hours, the town was attacked by Volksgrenadiers from 77th Regiment.


In essence this is a small but good quality defence with plentiful support weapons, being attacked by a much larger, but lower quality force.


The Germans win by exiting 10 VP’s worth of troops off the middle part of the opposite edge of the game board.


The special rules have provision for snow, which if it occurs will cause a targeting hindrance at 6 or more hexes away and American squads have an enhanced smoke laying capacity.


Pre-game decisions.
There were a few decisions made at the start of play that would have an impact upon the direction of play.


German - recognising that 4 squads and the 9-1 leader will collectively score the 10 Victory Points if they exit the board, the leader and 5 squads were separated out and given just that task. Their role would be to infiltrate the American flank to exit the board and avoid initial contact if possible (i.e. movement in preference to fire).


American - the defence was based upon the machine guns protecting the front with cross fires, while the two flamethrower armed 7-4-7’s would act as a re-deployable backstop to prevent penetration / infiltration. The important influence would be Major Tyson. It was decided that he would work with the .50 cal HMG placed in the centre, to ensure the effectiveness and survivability of that position. Arguably, the alternative role for him might best be with the flamethrower teams, as they are going to be expected to move and  get close to the enemy and that will mean exposing themselves to fire.


What could go possibly wrong with this such a fine defensive plan ...... other than a lucky double ‘1’ during an early German attack ! (Edit, I actually wrote this prior to play, half joking, but a fair number of low rolls did actually happen for both sides) 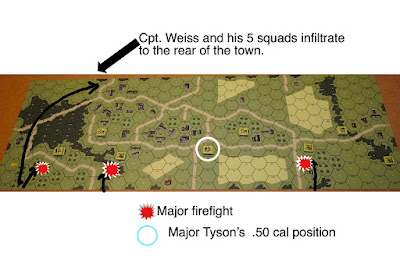 Chapter 1 - Getting onto the Board.
The game opens with the dice bringing in the snow and the first Defensive Fire against the advancing Germans scored a ‘3’ - see what I mean! 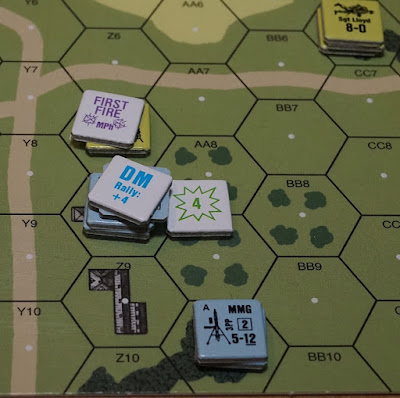 Above - towards the right, a German HMG takes up position in the woods to provide a fire base, while Sgt. Baumann moves up through the buildings to engage with a 5-4-6, a bold if not foolish move. Defensive point blank fire suddenly looks very scary, but only Baumann breaks and his two squads are able to move into the enemy hex and engage in close combat. This is not immediately resolved and it takes another turn before the Germans clear the hex.


Over on the far left, a stack advances, using the blind side of the farmhouse for cover. Once at the farmhouse, an ongoing firefight breaks out that fully absorbs the attention of the American MMG covering that wing. Cpt. Weiss uses that distraction to take his five squads safely up into the woods. 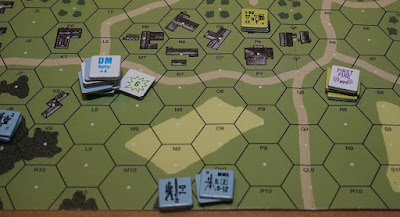 Above - in the centre, Sgt. Harpe and two squads get into the buildings and in a Close Combat quickly overwhelm the defending American 5-4-6, but this draws the attention of Tyson’s .50 cal, which delivers devastating fire (3MC) into Harpe’s position, breaking the stack.


A number of the attacks result in ELR problems for the 2nd line German troops, dropping their quality further and broken units are easily broken again, causing casualty reduction. This German force is susceptible to this sort of attrition.


The threat to the Americans is now clearly identified as being on their right and the flamethrower teams start to move into the rear middle / right area to block off any German infiltration, but they don’t quite have time to get far enough to make their flamethowers reach the exit point nearest to the Germans.


Chapter 3 - Exiting the board. 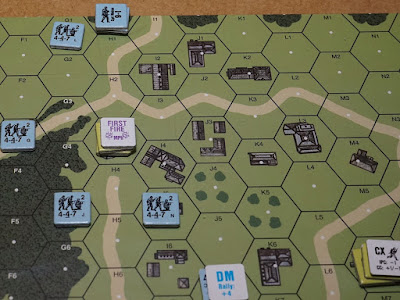 Above - Cpt. Weiss, makes excellent progress, reaching the far side of the board, while other German squads fan out to envelop the Americans at the chosen exit point. The American forces are caught on the back foot at the speed of this manoeuvre and are forced to make risky movements in response and that combined with ‘unfortunate;’ dice rolls, clips their wings by a series of break / Pin results, leaving them incapable of blocking the German exit from the board. The required 10 VP worth of troops manage to leave the board unmolested and the game ends immediately.


Conclusions.
Well, that was a pretty convincing German win (rather like my Bitter Woods results at this battle site). The American forces are fairly stretched, but those three machine guns have a good reach. I think it was the right decision to have Major Tyson set up with the .50 cal initially, but once the attack rout of Weiss was known, it would have been better to have had him leave the .50 cal crew to their own devices and for him to join one of the flamethrower teams to make them much more efficient / resilient.


It is a very good starter kit scenario, as assuming that players by now know the module rules, the scenario makes them focus on getting the best out of either force in a difficult situation, honing playing battlefield awareness and tactical skills (something I am still working on :-) ).

Resource Section.
The ongoing Bitter Woods campaign can be found at this LINK,
http://battlefieldswarriors.blogspot.com/2018/12/battle-of-bulge-1944.html


COMMANDERS is my sister website, which is more ‘snippet’ based than here. LINK.
https://commanders.simdif.com


A look at ASLSK from a beginners perspective. LINK.
http://battlefieldswarriors.blogspot.com/2014/11/aslsk-1-for-beginners.html

Email ThisBlogThis!Share to TwitterShare to FacebookShare to Pinterest
Labels: ASLSK