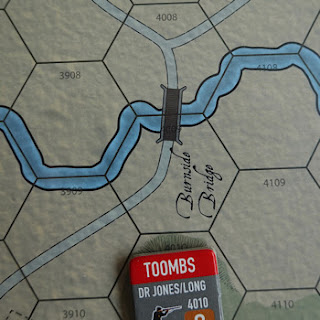 This is the first of a series of three posts, which will see playing of the Burnside Bridge scenario as a boardgame and then lift an appropriate slice of action from it, present it as a figure scenario and then finally AAR that bit of action as a figures game.

I am not sure which rules to use for the figure game yet and will probably wait until I see what situation falls from the boardgame.

The boardgame is Antietam 1862 from Worthington Publishing. I played the Bloody Lane scenario last week and that blog post gives some explanation of how the game works (see link in the Resource Section below), so none of that needs to be repeated today.

Today, we are just playing on the southern portion of the map, which I have marked off with a line of blank blue counters. The main feature on the map is Antietam Creek, which can't be crossed except at Burnside Bridge.

Historically, this part of the battle is all about desperate and repeated Union assaults to get over the bridge and secure a foothold on the other side, while Confederates control local high ground that makes this a tough and costly venture for the Union, who take heavy casualties in just trying to reach their own side of the bridge, let alone cross it.

There is a special rule that allows Union units to leave the map on the south edge to explore further along the creek to seek out another crossing point. Units that leave the map will ultimately find a place to cross and they will show up later in the game on the Confederate side of the creek, emerging from the woods on the right, but the time they take to do this is randomised.

The Union player starts the game with 4 divisions (Sturgis, Willcox, Scammon and Rodman), forming IX Corps under Burnside. Each division only has a couple of brigades, together with their artillery, but they are large units and therefore in this system, powerful and can stand a lot of punishment.

The Confederates have a single division in play under DR Jones, plus Munford’s cavalry. The division has more brigades, but they are relatively weaker and so more fragile as they will reach ‘shattered’ status faster. Toombs is forward of the main force, holding the heights in front of the bridge, which dominate the bridge exit.

The time at start of play is 1100 hours. AP Hill will bring his Confederate division in as a Confederate reinforcement at 1400 hours. Both of these divisions are under the Command of Longstreet. Can Jones hold on long enough for Brigadier General Hill to come to his aid?

At some point, I expect this game to throw up one or two good situations to transfer to the figures table in due course.

In our game, the Union player moves first, which gives an opportunity for the divisional commander Willcox to lead Welsh across the bridge in a dash to contact Toombs before the Confederates can react and move up. Welsh has double the numbers of infantry, but Toombs has the better morale .... already it looks like we have a good action with some interesting contrasts to use for a figures game.

In the game, Toombs’ defensive fire is ineffective and that really matters because in the real battle, the attackers were hammered by what the game calls defensive fire, making no headway. In some ways this is off-set by the Toombs passing their morale following the Union assault fire, so the turn ends with a sort of stand off, but with the Union still on the Confederate side of the bridge - off course this could all have gone different ways, but if this is the situation we choose to use for the figure game, then we should try and model it on the figure table.

For those thinking that this is a very 'unlikely' Burnside Bridge situation, it must be remembered that we have only played the Union part of the turn and to get a proper idea of how this first hour of battle plays out, we should into full account the Confederate part of the turn.

Jones gets his division moving into position to counter-attack Welsh, while Munford’s cavalry move over to the right and dismount in the woods. This will be the location that Rodman will later re-enter play.

The Confederate counter-attack pushes Welsh back across the creek and repeated Union assaults over the next few hours fail as they come up against Toombs on the heights and their supporting brigades.

As time moves on, Jones’ Confederates are becoming increasingly weakened from the repeated Union assaults and enemy cannon fire, with some of their smaller units going ‘shattered’.

Hill brings the Confederate reinforcements onto the right flank and as they occupy the space between Jones and the woods, they clash with Rodman, who’s arrival from his flanking march slowly escalates into a full divisional battle and a major distraction to Hill, leaving Jones to become increasingly concerned at his casualties at the bridge.

After several hours of fighting, the battle subsides. Rodman has been totally defeated at the woods and Longstreet was unluckily killed by long range artillery firing at his exposed command post. The bridge remains contested with Toombs hanging grimly onto the heights.

In the last turn (1900 hours) Nagle (Union) at last takes the heights above the bridge, with Ferrero covering his left flank. There is enough breathing room now for other Union brigades to cross the bridge .... if only there were more turns to play, but the Confederates are yet to play their half of the last turn and they counter-attack. Most of Jones’ units are shattered, so they cannot move into the attack, but Hill is now free of Rodman and can act.

As Nagle (Union) consolidates the heights, he moves into point blank contact with the enemy artillery reserve and his brigade is shattered, but the brigade still holds on, while Ferrero to his left also becomes shattered from Hill’s intervention. Their morale breaks and they rout.

Looking at the map at the end of play and assessing who could do what, it is obvious that Nagle is in a very precarious position and likely to be put to the test by Hill’s division. However, the Union still have one powerful fresh Division (Scammon) that has been held in reserve and so in terms of where the fight could go now, if there were more turns left, between these two exhausted forces, it is too close to obviously call.

However, the scenario victory schedule gives us our result. We see that the Union have failed in getting their geographic objective (cutting the supply road into Sharpsburg) and have taken horrendous casualties (5600 men compared to the equally appalling Confederate losses of 2800 men), mainly due to the total defeat of Rodman and so the game victory point schedule dictates that this is a Confederate victory.

And so there we are. The game to my mind generated two areas of interest for a follow-on game in miniature. One was the clash or at least part of it, with Rodman’s division and Hill at the woods, but my preference goes to that initial crossing of the bridge where Welsh catches Toombs before the rest of the Confederate division can come to Toombs aid. This does have the benefit of being a small action that could fit a small table and small figure collections.

As for the boardgame itself - excellent. This scenario had twice the number of units as the Bloody Lane  scenario (see below) and the slickness of the system is appreciated to keep things moving and very manageable, which I think will become even more obvious when the full battle is played. I am enjoying this purchase.

There were plenty of good narrative points in the game, which played in a weekday evening session. I am looking forward to the full battle scenario, but will try the ‘Morning Attack’ scenario first.

The next post will look at generating the Welsh / Toombs scenario ready for the figures table.

Blogged AAR of Bloody Lane, which gives some commentary about the game mechanics and flow of play. LINK

Part 2, the scenario design is now up. LINK

Part 3, the actual figure fight is now up. LINK