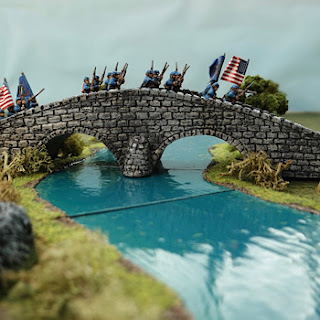 Peter Pig 15mm figures on a Kallistra Bridge, river is S&A Scenics
This is the second of three planned posts, which takes a small slice of action from a boardgame and converts it to a figures game.

Having identified our slice of action in the last post (see link below), this post will be about creating a scenario for our figures game, which will be played out in the next post.

The boardgame uses a scale of around 250 yards per hex, so our battlefield is quite small and ideal for the smaller table. In the Union part of the opening turn of the boardgame, they were able to rush Welsh's Brigade over Burnside Bridge and assault the position of Toombs, on the heights just beyond the bridge.

If we just take a snapshot of that moment and replicate it, we will have failed to properly show what was happening over the whole turn, which would also include the Confederate reaction in their part of the turn, which did in fact see Welsh thrown back over the bridge.

However, if we if we take the Confederate part of the turn too literally, we will have the case that in the game, the Confederates are able to bring almost all of their division against Welsh, which of course does have a rather inevitable outcome and is much less exciting than we would want our scenario to be.

So, it seems sensible that we bring in just some of the elements that are on the periphery of the Welsh Vs Toombs moment. There are six aspects that were created by the game that should be considered, these being;

Willcox, the divisional commander is with Welsh.

For this brief moment in time, neither side had artillery in a position that could directly assist for this slice of action.

The boardgame units are rated for size and morale values and these should translate directly into the new scenario. Welsh has roughly double the number of men to Toombs, but Toombs has the better morale.  Drayton (reinforcement), like Toombs has smaller units, though their morale is just standard (as is Welsh).

The fight will start at 1100 hours and we want to show an amount of fighting that allows some Confederate lead regiments of two other brigades to join Toombs, but not all of their brigades or other elements of the division (Jones was the Divisional Commander and we will not have him present with our brigades).

Nagle’s Brigade (Union) are moving towards the bridge in support of Welsh, but the area is congested and Welsh needs to create some room for the supports to be usefully employed.

Col. Christ’s 1st Brigade (Union) is in the vicinity of the creek and bridge and have taken up firing positions on their side of the creek, just to their right of the bridge and with minor influence on the action that we are highlighting.

We will draw these points into the scenario.

We should remind ourselves that we are re-creating a situation that cropped up in the boardgame, we are not creating the historical action at Burnside Bridge ..... what is the difference?

Well, in reality, both sides had sited their artillery to bring the enemy under intense fire. Also the Union, to even reach their own side of the bridge before crossing, had to face a withering fire of musket and artillery from units emplaced on the high ground opposite. This fire was devastating and wrecked some of those units that were put into the fray, even before they had even reached the bridge.

In our spin-off scenario, we already have Welsh across the bridge and the artillery is not positioned to bring in any good effect. So in truth we have rather a different set of circumstances than history, though in the same location.

It is the case however, that in the boardgame, the Union attackers did get some casualties and so for that reason and with a slight nod at real historical problems that the Union had in reaching the bridge, we need a special rule to inflict some pre-game casualties on the lead Union units. We also need to ensure that confederate musket fire can reach across Antietam Creek to at least potentially cover the approaches to the bridge with fire if the opportunity arises.

We will take the basic construction of the scene from the boardgame, which gives us the creek, bridge, road and high ground. To that, we can add a little detail as described in the excellent Burnside’s Bridge - Antietam by John Cannan, published by Pen & Sword in their Battleground America series.

There is not much to add to the Confederate side of the table, other than to note the hill extends down to the bridge exit, but these lower slopes are less steep and ground between the steep slope as marked on the map and the bridge should simply be treated as rough ground.

The Union have fencing to one side of the road and a walled ploughed field that both gave cover and frustrated their attack as obstacles, while to their left they have a cornfield that some regiments had used to shield their approach to the bridge.

The thin line of trees in front of the cornfield can provide light cover to units located amongst them and to any units that receives fire by that fire passing through them (i.e. they degrade fire, but do not block line of sight).

Taking roughly a group of six hexes (3 wide x 2 deep) from the boardgame map, we can create a battlefield that represents that ratio. A 6’ x 4’ is the obvious conversion, but smaller would be fine, depending upon figure scales and my game will likely be played out on a 4’ x 3'

Anyway, this is what we end up with; 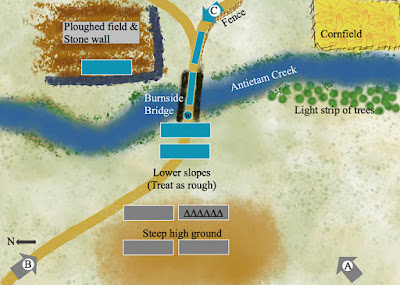 There are several sets that could cover this but I have decided to use Black Powder, together with the Glory Hallelujah supplement and the Orders of Battle tables reflect that terminology, but this is easily transferable to other sets.

The game will last for at least 5 turns. At the end of turn 5 roll 2D6, if the score is equal to or less than the current game turn number, the game ends, otherwise play continues for another turn. At the very end of each subsequent turn, repeat this process. Regardless, the game will never play beyond 7 turns.

Before play and before setting up, roll a d6 for each regiment in the game. On a score of 6 the unit is armed with a smoothbore musket rather than rifled. The confederates add +2 to their first test. The Union will stop testing after the first unit becomes smoothbore armed.

Any unit in Toomb’s Brigade (only) that become smoothbore armed, will get the ‘Pour it on boys’ special rule from Glory Hallelujah.

Before play, randomly (check all units in the OOB) select two Confederate regiments to have the ‘Rebel Yell’ characteristic.

All Confederate regiments are rated small and their OOB stamina stats already reflect that. The Union units are standard size.

The Confederates set up first. Toombs can be placed anywhere on the high ground, with two regiments up front, side by side and the other two regiments behind them.

Drayton’s two regiments start off table. At the outset of each Confederate Movement Phase, dice (D6) for the arrival of each of the two regiments separately.  On a score of 6 the regiment is available to enter the table that turn. As soon as the first regiment becomes available, further testing on the other regiment has +1 added to their testing die. The regiments arrive on Toombs right flank at the arrow marked ‘A’ on the map. If these regiments have not arrived by turn 3, they will automatically arrive on turn 4.

1st South Carolina, the lead element of Col. J. Walker’s Brigade starts off table and may arrive as a reinforcement. They will arrive on Toombs left flank at the arrow marked ‘B’. They arrive on the turn after Drayton's’ second regiment has entered the table.

The Union place 2 units on the far side of the bridge (i.e. the Confederate side of the Creek), in column of regiments, but the rear unit should have their rear base touching the bridge. Another regiment is placed on the bridge and the remaining unit is placed as though it is about to enter the bridge from the Union side. These units Welsh Brigade

28th Massachusetts (1 regiment belonging to Col. B. Christ’s brigade) set up behind the wall in the ploughed field. They are fixed in position and will not voluntarily move during the turn, except to defend any part of the ploughed field (they are waiting for the rest of their brigade, who do not show up in this scenario anyway).

Nagle’s lead elements (Union) will enter the table along the road at point ‘C’ the turn after Welsh has managed to get all four of his regiments fully onto the Confederate side of the creek.

The high ground had a small ravine near the top that gave the Confederates cover and a firing position. In the game, the Confederate unit that sets up in the front right position will count as being in light cover (get +1 to saves) until such times that they move or are otherwise removed. At that point the notion of cover in that location is removed.

The Creek is impassable except at the bridge.

Once everything is set up, the two front Confederate units on the high ground get one round of free fire against the Union and casualties are recorded and any disorder applied .... but any associated morale type tests are NOT taken.

Note - In using Black Powder, the rule from the Glory Hallelujah supplement applies, that does not allow a unit to fire in the Shooting Phase of a turn in which it moved more than once (BP allows units to move up to three times depending how lucky they get with their orders, so big movement followed by fire is not allowed).

The game then starts properly with the Union as player 1.

Victory Conditions - If at the end of any turn, the Union player is the sole occupant of the high ground, the Union will win an instant and automatic victory. Failing that, victory points will be scored based upon enemy casualties at the end of the game.

For every enemy regiment removed from play, the friendly player will earn 1 victory point. This will result in either a win for one player or a draw.

The next post will cover an AAR of this scenario being played out as a figures game.

Part 3 - The actual figure Is now up. LINK