Getting ready for the battle at Beacan Farm. 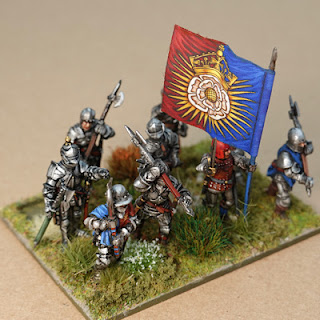 As units slowly pass across my painting table for the Bosworth project, the mercenary contingent continues to grow and so shortly a minor action at my fictitious Parish of Piggy Longton will be fought as the newly recruited mercenaries seek to unite with Lancastrian forces. York (above) will be looking to interfere with those plans.

So, besides the painting, which will see pike, crossbow and handgunners ‘on tour’! this battle location within the parish needs a couple of terrain items added. First up is a barn to sit on the outskirts of Beacan Farm. 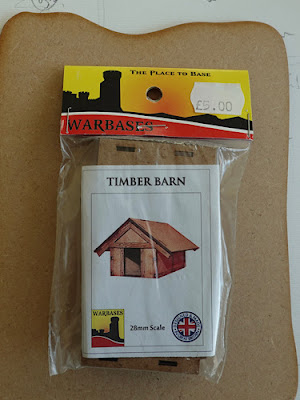 Above - I chose the MDF 28mm barn kit from Warbases as it seemed to have a small footprint (90mm x 50mm base), which will help my smaller table (link to Warbases in the resource section below). 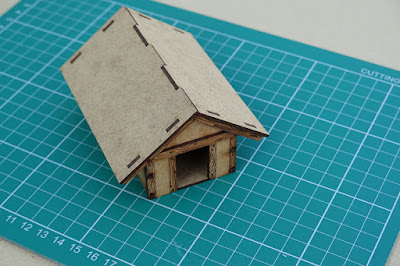 Above - At £5 it is a useful kit, especially once embellished. I made a paste up from artist acrylic paste, plus a few drops of brown paint added and with a small palette knife smeared this thinly over the walls between the wooden frame to give a daub effect. This dried the right colour. Some of the wood was lightly touched up with dry-brushing to brighten and preserve the grain that the laser cutting had created.

Now for the roof. I wanted thatch, so I cut a load of brush bristle, lathered the roof with PVA and did thatch. It just wasn’t a good look, so that was all wiped away before the glue set .... just!

Then I did another mix of acrylic paste, spread it on and used a palette knife to draw down thatch lines, let it dry and painted and heavily inked it. it looked okay, but obvious to my eye were some of the original paste spread lines under the thatch strokes and these became too distracting for me ..... so what to do! 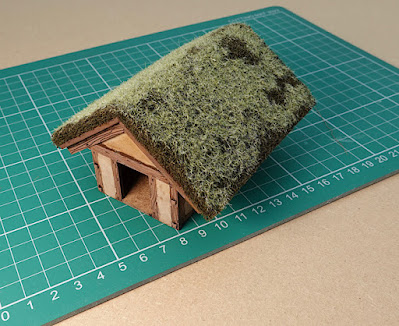 Luckily this months Wargames Illustrated magazine has an article for a building that used those green pan scrubber things as a roof surface and I followed their suggestions. The scrubber was cut slightly bigger than the roof and attached with a hot glue gun. It was then spray primed from above and airbrush painted with burnt umber (twice). Dry brushing brought out the texture and then the transformation bit ...... roughly applying PVA glue over the roof so that some gaps were left, a static grass applicator was used to drop 2mm grass onto it. I only had a greeny / yellow shade, but it seems to have worked to give that moss sod effect. 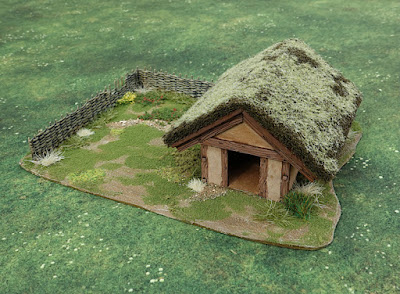 Above - for storage reasons, I prefer to keep buildings as unbased singles, but this deserved a base that could help define a built up area (BUA), so I used a 3mm MDF 150mm x 200mm blank shaped terrain base from Warbases (£1.65) and attached some plastic wattle fencing that came with my Perry plastic cottage kit model.

The base edge was chamfered down with a blade (caution MDF dust is toxic) and the plastic fencing was very effectively attached using 'No Nails' glue (it just needs one surface to be porous, which of course the MDF is).

Artists acrylic paste, heavily tinted with burnt umber acrylic paint and mixed with some flock grass for texture, was spread very thinly (to avoid warping) over the base. Dry brushing, flocks and tufts completed the look. The open area was not tufted, so that it could be occupied by the big 80mm x 60mm bases. 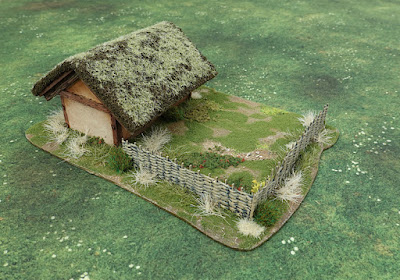 So, a bit of work, but a fairly universal piece resulted that can take its place in a goodly number of games and periods, spanning over a few hundred years. Size wise, this is also working with the 1/72 WWII figures.

My other build was fencing. After the major crime of me binning a load last year in my attempts to break bonds with the 28mm scale, I have been left short on that front. So each time I put an order in to Hoka Hey for bases or buildings etc, I normally have a couple of their fences added to the list. 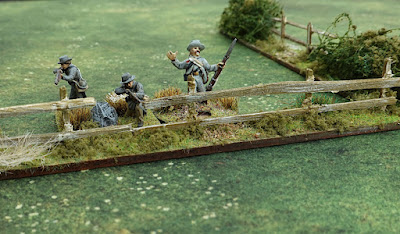 I like that they are on 3mm thick MDF, so I have not seen warping, but I also like my bases to be a bit heavier flocked / foliaged / tufted than these arrive with, so I used spray picture mount glue on the horse hair hedge bits and heavily flocked them and then PVA’d the bases to add flock, grasses and tufts. The final result to my eye is more pleasing, with the hedge bases now having a greater presence. 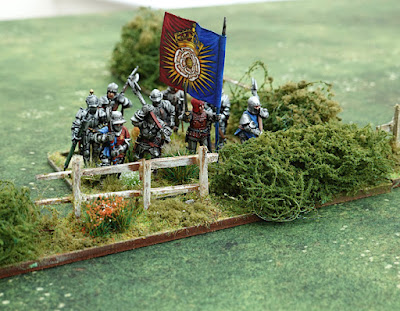 Another advantage of accessorising things like this is that by using similar materials throughout, they knit better with other parts of my terrain and bases.

Aside from doing terrain, I have a storyline for the next game and am close to completing the last unit (pike) for the scenario. It will fit onto a 4’ x 3½’ table, which is rather the point of the exercise. The rules used will be Sword and Spear by Great Escape Games.

The main commanders look suspiciously like Henry Tudor leading the mercenary force and King Richard III leading the Yorkist force, but would we really have it any other way! :-)

Coming soon to a blog near you!

My sister webspace COMMANDERS is just getting a refresh and will have a collection of shorter AAR’s. Link.

Email ThisBlogThis!Share to TwitterShare to FacebookShare to Pinterest
Labels: 1/72nd and 28mm Project, Piggy Longton, terrain, Wars of the Roses