Hastings 1066 - some boardgame action and a figures video. 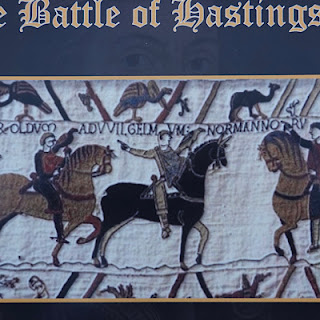 Recently, I was rather taken by a YouTube video AAR of the Hastings battle using 28mm figures on nice terrain, with the Triumph rules system. A link to that video is given in the Resource Section at the foot of this post.

There are a series of three videos showing the full battle, but for those inclined not to watch, I would recommend looking at just the first 10 minutes or so, to appreciate the nature of the battlefield and the efforts of the gaming group.

The game shows a hard slog up the hill, with the flanks being where the first Norman inroads to the Anglo-Saxon defensive position are likely to occur, but for much of the game, the Normans are battering themselves against a robust Anglo-Saxon line and a win for them looks unlikely, it is only in the last part of the battle that any certainty of a victory to either side becomes clear.

This is very much how I portrayed the battle in my Hastings boardgame, it is not an easy battle for the Normans .... neither should it be!

Anyway, prompted by the video, I put the boardgame, Invasion 1066: The Battle of Hastings, on the table (published by Revolution Games). This post takes a light overview of how the game progressed this time around.

I am going with the historical set up. The Normans are at the foot of the ridge with a centre and two wings. Their army is drawn up into 3 ranks, archers, then infantry, followed by cavalry.

The Anglo-Saxon front line is hardened by a rank of Housecarls and Select Fyrd, their superiority combined with the ridge position makes this a tough nut to crack and Norman attacks will likely need leaders to get involved (risky) if they are to break into this defensive line. The Norman player must keep trusting that they will win ...... even when that looks unlikely, victory is often only revealed in the last moments of the game.

The Anglo-Saxon position is strong. There is only one thing that the player commonly needs to observe ...... don’t come off the hill! (well, unless the opportunity for victory is too good to ignore - see link in the Resource Section for such a game). As front line Housecarls fall, they will be replaced by the weaker General Fyrd and as the General Fyrd increasingly fill these front line positions, the greater the threat to the Anglo-Saxon player’s defensive line, but this all takes time to unravel.

Casualties feed into the calculations for rout levels. The more casualties suffered by any particular class of troop, the greater the chance of them routing and so this is an ‘attackers’ game, trying to force routs by inflicting casualties. At first, routs will be localised, but as the armies deteriorate, routing will become more widespread. 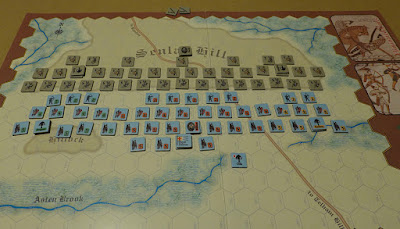 Above - the historical scenario starts on turn 3. The battle opens with nice tidy lines. The Normans open with their archers, trying to disorder the enemy, where successful, Norman infantry will move in to engage. Archers shoot with a D6, but on a roll of 1 or 2, the unit goes ‘out of arrows’ and is removed from play. This is a mechanic that simply recognises the opening phase of battle and stops archers behaving later like melee troops. 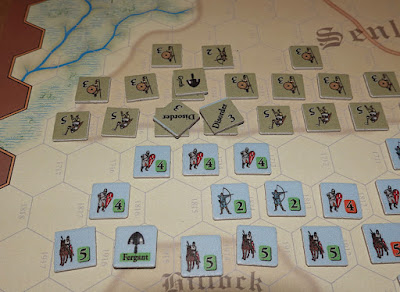 Above, they have a great opening, disordering two adjacent Housecarls opposite the Bretons, reducing their strengths from 5 to 3 (+1 for the slope). The Bretons (Green on the left) under Fergant, attacks with infantry, but one attacking unit is removed from play. 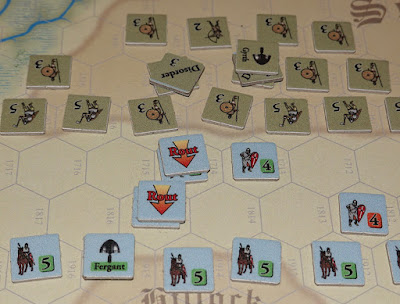 Above - The Housecarls in the front line pull back, so that they can try and re-order and are replaced by Fyrd. Breton infantry to exploit this, but frustratingly lose another unit, causing adjacent units to check morale ..... they fail (D6 roll 6, plus 2 casualties =8, which is their break point), so they rout. They do not have a clear path to be able to rout through, so they will be removed from play. This is a disastrous start for the Norman left. 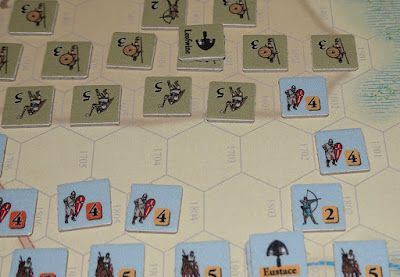 Above - On the right, the Franco-Flemish under Eustace manage to get a foothold on the ridge. 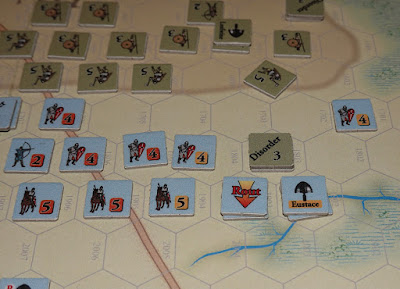 End of turn 6 - things are not looking good for the Normans. Their left is partly neutralised and the right has taken casualties and is seeing routs. A disordered Anglo-Saxon Fyrd unit on the ridge loses discipline and makes an impetuous charge off the ridge to follow the routing cavalry (above). They catch up with the cavalry near Asten Brook, but fail to do any harm. This lone Anglo-Saxon unit is not going to survive for long out in the open!

William must get the attack moving and is compelled to do something in the centre with his cavalry, but this is risky. 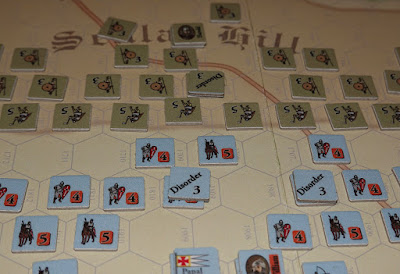 Turn 8 - Desperate Normans are now resorting to feigned attacks with their cavalry. ‘Pretending’ to retreat can prove particularly dangerous, but in this instance (above) they are successful in disordering a Housecarl unit. 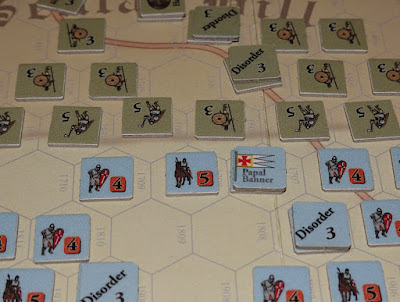 Turn 9 - Seemingly getting nowhere, William orders the Papal Banner to be put into the front line to inspire his men (above). It does create new momentum and the cavalry break into the ridge position, but are at great risk to being attacked in their flanks. However, against the odds and even though disordered, the cavalry unit holds off against Anglo-Saxon attempts to dislodge them. 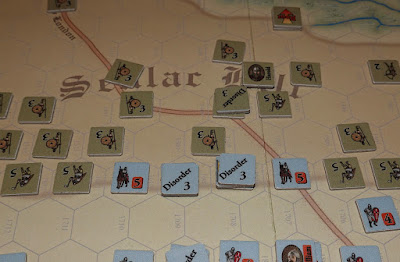 Turn 11 - The Normans have breached the centre (above), but both flanks of the army are exhausted. William moves up in case he has to intervene personally (the loss of either King Harold or William will cause an instant sudden death victory to the other side, so this is a good indication of how worried the Normans are). 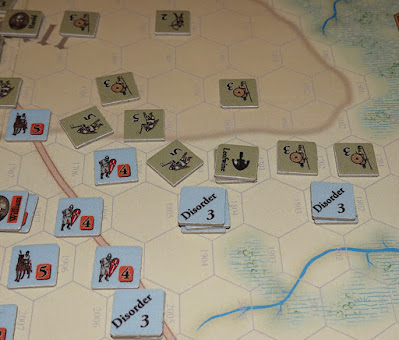 Above - Harold’s brother Leofwine leads an attack, bringing his wing off the ridge and into the Norman right. The attack is devastating and Eustace is killed by Leofwine.

Turn 12 (the last turn of the game) - The Norman centre has become disordered and William becomes directly involved in the fight. He orders the whole line to make one final Herculean assault, but some of those attacks are ill-advised. 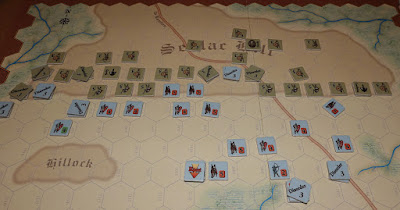 One Norman infantry unit break and are removed from play as they assault the ridge in the centre and as a direct consequence, two adjacent Norman cavalry units fail their morale tests and rout. One of the units is carrying the Papal Banner, the other is with William (not a good omen), though William is able to rally his unit back up from rout to disorder status and hold them before they raced off the map!

For their part, the Anglo-Saxon left flank under Leofwine pulled back onto the safety of the ridge and the rest of Harold’s army move to re-consolidate along the ridge as best they can, but they are lucky that the battle has ended as they too have some problems. They have lost too many Fyrd, mostly men routing from the ferocious fighting in the centre.

An enjoyable game that despite good initial arrow attacks, quickly saw the Norman flanks flounder and they never really recovered from that.
Normally they would keep pressure up on the flanks using their leaders in combat, but their commands became too fragile too quickly.
Perhaps Norman leaders should have been more involved and perhaps with failure looming, William should have taken a risk and intervened earlier.
The Anglo-Saxons didn't have to work too hard. When Leofwine counter-attack, coming off the hill, he did not have an overwhelming force, it was just that the Franco-French under Eustace were so vulnerable. Once the Norman centre started to cover that flank, Leofwine sensibly fell back to the ridge.

Looking at the map, the Normans have obviously failed to dislodge Harold from the ridge or to destroy the Anglo-Saxon army, but let’s see what the Victory Point Schedule looks like;

Normans - get 18 points for removing 6 Housecarls, 20 points for 10 Fyrd and nothing for the objective of penetrating deeply into the ridge.

Anglo-Saxons - get 18 points for removing 9 Norman infantry, 28 points for 7 cavalry, 5 points for killing Eustace and 1 point for there being an enemy currently routing. They do not get any points for an objective (reaching the causeway at Asten Brook) and have failed to capture the Papal Banner.

Though it looks very tough for the Normans, the game does generally give them a fair crack of the whip a 50/50 and normally it is the brutality of the final couple of turns that decides the issue.

Hastings in 28mm using Triumph rules - a YouTube presentation. There are 3 videos, each about an hour long, but just the first part of the first video will give a good overall impression of play. LINK

An earlier post showing a Hastings game, when the Anglo-Saxons counter-attack in strength. LINK.

A post covering the sister game at Stamford Bridge, against the Vikings. LINK