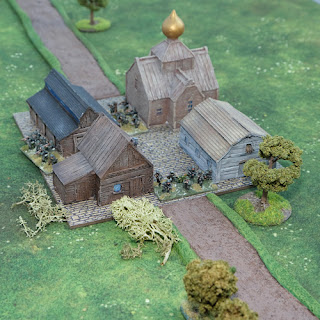 This is an opening post that describes a small / short WWII campaign game that is based upon a marriage of scenarios taken from Neil Thomas' One Hour wargames and 'O' Group rules by David Brown.

We are somewhere on the eastern front in 1943, using the scenarios from Neil Thomas’ One Hour Wargames book to populate our campaign ladder. If you use the fast play rules that come in the same book, the campaign could easily be concluded over the course of a day.

I will be using the 'O' group rules. What follows will be a description of how the campaign was set up and an AAR of the first battle.

Zone 3, at the centre of the ladder is an important objective in the campaign as it ensures victory and this will be fixed as being based upon Scenario 23 (Defence in Depth) from the OHW book.

The other 4 zones will have randomly selected scenarios from the remaining 29 scenarios in the book. I drew numbers from a cup and was able to populate the other zones with scenarios as shown in the above graphic.

In each battle, the table will be 3’ x 3’ size as per the standard OHW scenario requirement and the action will be executed as per the scenario instructions as given in the book.

The figures shown here are 10mm Pendraken, terrain is from S&A Scenics, Timecast, Pendraken and Battlescale. The cloth is from Geek Villain.

Choose your rules. I will be using O’ Group by David Brown. To make them work for forces this small, I will reduce the number of command dice rolled at the start of the turn from 9 to 5 for armies getting six units and from 9 to 4 for armies having less than 6 units, reduce the FUBAR rate from 4 units destroyed, to 2 destroyed and restrict the maximum number of dice that a HQ can hold to 3 (instead of 6).

In each game, the order of battle is selected as per the OHW generic system and scenario, plus the attacker always gets a bonus of one pre-game artillery bombardment against one target or geographical feature visible from the attacker's base line, using an off board mission of medium artillery (one use only). Accuracy must be rolled for. Note, OBA is not catered for in the OHW system.

While OHW gives generic unit types (i.e. a tank is simply a generic tank), when creating orders of battle prior to each of our games, we will allow some variety and specific unit types to be created. For each generic unit awarded to each force, roll 1D6 on the following table to properly establish the unit type, which will work with the 'O' Group rules.

With OHW giving us our scenario and Orders-of -Battle and with the O’ Group the rules, we are ready for the first action.

Soviet controlled zone 5 attacks German controlled zone 4, this gives us OHW Scenario 14 ‘Static Defence’. Scenario instructions have both forces beginning with 6 units. They roll on the force creation table in the OHW book, both sides roll a ‘3’, so both sides get 3 x infantry, 1 x A/T and 2 x tanks - all generic.

The scenario is interesting as the defenders (German) have to keep two units within the vicinity of the hill and also another two units within the vicinity of the village, while the Soviets only need to take one of those objects. Since the objectives are on the flanks and separated by a woods, the Soviet player can choose their objective and concentrate all of their units up that flank - avoiding the other defended objective altogether.

The OHW tables are typically very sparse, in this game only the hill, village, woods and road are on the table, so adding a bit of scatter terrain helps the look.

I set the defenders up and then rolled a dice (50/50) to see which objective the Soviets would assault ….. they 'got' the hill on the left side of the table.

Next I executed the pre-game Medium Artillery Stonk that I am allowing at the start of every new battle.

Opening moves - The Soviets advanced en masse up the left side of the board. Their T70’s raced to a field barrier and with good shooting, each hit the German StuG, but failed to penetrate the armour. Their very effective 57mm A/T came up to the same hedge line deployed and immediately put damage onto the StuG (a vehicle represents 2 - 3 vehicles, called a section, damage represents destroying a vehicle in that section), but the Panzer III unit, located near to the village, skirted the woods and started to pump shells into the thin flank armour of the T-70’s. The little tanks would have to press on to get out of that line of fire.

Mid Game - The battle was breaking down into 3 distinct localities. Firstly the Soviet SMG platoon was engaged, firing from the fields, at the Panzer Grenadiers in the woods.

Secondly, the 57mm A/T gun was still sitting by the two brewed up T70’s, attempting to defeat the StuG / Marder up ahead, whilst still suffering shell fire from the Panzer III by the village.

Thirdly, two Soviet infantry platoons had advanced close to the hill. The first platoon with the MMG started to fire at the Panzer Grenadiers on the hill, while the second platoon went ‘tank hunting’, closing in on the StuG. The StuG responded just in time and was able to back out of the trouble, putting itself on the rear side of the hill. Not wanting sole attention from the Soviet anti/tank gun, the Marder likewise pulled back behind the crest of the hill.

It all hangs in the balance! Both sides were trading fire, without either gaining any real advantage. The two Soviet infantry platoons were bringing the hill under increasing pressure. To support the hill line, both the StuG and the Marder crawled forwards up the far side of the hill and took hull down positions on its crest - but both were quickly lost to the excellent gunnery of the 57mm anti-tank gun.

The 2nd Panzer Grenadier platoon in the woods disengaged from the SMG platoon and cut back through the woods to aid their comrades at the hill, but the SMG platoon followed up and attacked them in the flank. There was a moment of panic when the Panzer Grenadiers tried to escape back to the village (but failed their withdrawal die roll!) and a well respected junior officer organised a hasty defence and against all the odds, the Soviet SMG platoon were forced to retreat back out of the woods.

Final moments - The Panzer III was lost to the tenacious 57mm A/T, with much encouragement of course from the Company Commander (additional orders spent) and then that final Panzer Grenadier section holding the hill was removed from play by fire from the MMG.

The 2nd Panzer Grenadier platoon made a dash from the woods towards the hill to secure it, catching a Soviet rifle section off guard and forcing them to retreat a goodly distance, but the grenadiers were driven off by the fire of the other Soviet rifle platoon with its MMG. Losing one section (base) in the process, they hastily fell back on the village, leaving the area and hill uncontested and allowing the Soviet infantry to capture the hill, giving them the game.

That was actually quite a tightly fought game, with moments of drama for both sides, which ‘O’ Group is good at introducing.

The ‘working relationship’ between the OHW scenario / instructions and the ‘O’ Group rules worked quite well. Obviously the scenario set-up is pre-established, so I didn’t use the ‘O’ Group opening procedures for that, but the play itself ran smoothly and tweaking some of the various aspects of the rules, such as reducing the number of order dice and HQ size, did help this smaller scenario, as 'O' Group is designed for a battalion level game (not company).

The OHW scenarios always play for 15 turns, our game today took 11 turns, so I am happy with that. Very early on, I thought there was going to be a Soviet disaster as the two T70 units fell so quickly, but the stalemate by the mid game and final push at the end did turn out to give a convincing Soviet victory.

Which was fortunate, as otherwise, with the Germans as winners, in the next game they would have counter-attacked into zone 5 (Scenario 10 - Late Arrivals) and another German win there would have ended the campaign rather prematurely, but these possibilities have to exist to give the campaign some edge.

One of the things that I like about these sort of campaigns is generating the forces before each battle. I am quite pleased the way the above unit conversion table adds some character to the units, which the OHW system generates as generic. Even little things like getting a MMG with a rifle platoon can add a lot of character to the scenario (it did here), but of course getting a rarer heavy tank, such as a Tiger or SU 152 SPG is bound to show up at the wrong / right time for one or other of the players - perhaps even in that critical battle!

Our next battle will have the Soviets attacking from their newly captured zone 4 into German held zone 3. This is an important battle, because that particular zone is the campaign swing zone, as whoever owns it will already have 3 out of the possible 5 victory points. This will use OHW scenario 23 - ‘Defence in Depth’. See you there!

This is a blog article on a previous ‘O’ Group small game. LINK

This is a blog article on a previous look at One Hour Wargames. LINK

This is my sister paid for webspace COMMANDERS, which is having a bit of a make-over, with a view to highlighting some of my main project / game interests. This week it has been looking at the 1809 project and there is a link there to a very useful 1809 free PDF download. LINK