Battle of the River Plate

River Plate (Graf Spee) and Denmark Straight (Bismarck) are a naval pairing printed by Decision Games in their Dreadnoughts & Battlewagons series. The designers are Eric Harvey and Chris Perello. 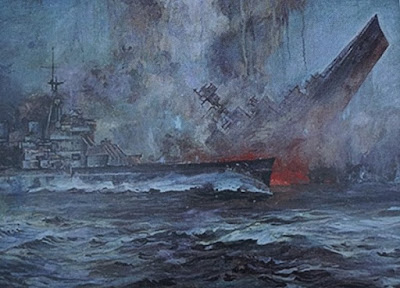 Today, we will be taking the River Plate scenario and with a play through, examine some of the features of the series.


I should say before starting that I am not a naval buff and so without intimate knowledge of the subject, I am not best placed to make a reasoned judgment as to whether this system would meet the expectations of the enthusiast, but the Graf Spee and Bismarck engagements are two battles that particularly interest me and since this has a low to medium complexity system, small footprint and fast play, from the get-go, this package could well have been written for me ... so let’s see!

The game comes as a ziplocked package with a sturdy cardboard folio folder. The map is 17” x 22” (4 panel), in an attractive blue and using large hexes. The hex grid is 27 hexes wide by 18 deep and each hex represent a nautical mile and each turn represents 10 minutes. 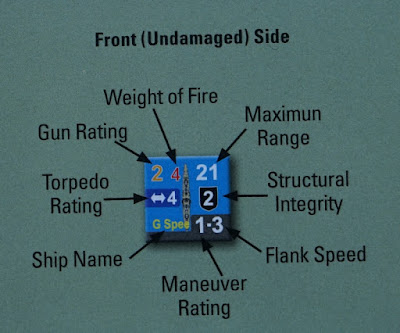 There are 100 counters, which are mostly markers, as between them, these two battles had few ships. The markers are 12mm square, while the ships are 14mm square, so it is both nice and unusual to see a mix of counter sizes on the one small sprue. The ship silhouette is small.

The rules are in an 8 page format, but ignoring the front page index and the rear page charts / tables, the rules themselves sit at a concise 6 pages. There is a single page scenario sheet that covers both battles.

Battle of the River Plate - 13th December 1939.
The Germans have one ship, the Pocket Battleship Graf Spee, which is heading southeast at standard speed and not conducting evasive action.

The British have the Cruisers Exeter, Ajax and Achilles entering the map on turn 1 at standard speed and not conducting evasive actions.

The British need to destroy the Graf Spee, while the Germans need to at least reduce the speed of all enemy ships to less than the Graf Spee’s (essentially so that the Graf Spee can escape).  This has to happen within 10 turns.

There is an optional rule to allow the German ship Deutschland to take part, so players get a ‘what if?’ Scenario if they fancy trying that. 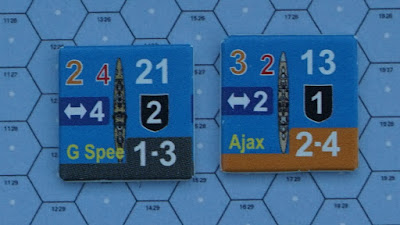 Just looking at the above diagram of Graf Spee and Ajax, we can see that the Graf Spee has several advantages. In defence it has a structural value of 2 compared to 1 on the Ajax, this is the number of hits the ship can take before the status of Heavy Damage is reached. At that point, counters flip over to their reduced side ...... but note, in this battle only Graff Spee has a reverse side, so the British ships will be sunk when their initial Structural Integrity value is exceeded!

For Gunnery, the Graf Spee has longer range (21 v 13) and heavier weight of fire (4 v 2) and better torpedo capacity (4 v 2). The Ajax is more manoeuvrable (2 v 1) and faster (4 v 3), but also note that they have a higher gunnery value (3 v 2), which means that they will roll an extra dice when firing and trying to secure hits.

In general and in a straight match-up, the Graf Spee on balance has better values ....... but there are three British ships in this battle!

This is a bucket of dice game, so you roll 1 or more D6 to secure a hit (on 5’s and 6’s) and then you re-roll those hits and try to convert them into damage, which again requires 5’s and 6’s. This can actually make damage a fairly illusive outcome, but when damage happens, it can be significant.

Having regard that ten 10 minute turns gives us 1 hour and 40 minutes of action, then the damage inflicted seems fairly apportioned against the length of the action. In the real battle, all four ships were damaged to various degrees, the Exeter seriously, Achilles and Ajax moderately and Graf Spee had to make port, but the thing of note is that none sank. So in a game that has so many dice flying around, the damage mechanic seems to have a fairly measured effect.

(Note, in the other game in this package, the Bismarck has a Structural Integrity rating of 6, so that is going to see a different type of game I imagine).

Oh, and one other thing, the sequence of play interestingly is Combat, then Movement, then Admin (remove smoke). All combat is simultaneous and movement alternates back and forth between players as ships are moved one at a time.

Anyway, how did the River Plate battle go?

Ajax and Achilles entered the map and increased to full speed to go directly north to intercept Graf Spee, while Exeter peeled off towards the left (north westwards) intending to close and then get into a broadside firing position. Splitting the British squadron will mean that Graf Spee will only be able to go broadside (firing advantages) against one group at any one time, while all of the British ships should be able to get into broadside positions. 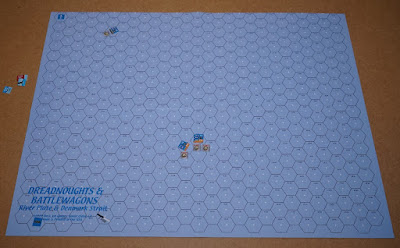 Maximum spotting range in the game is 18 hexes. The Graf Spee’s guns have a maximum range of 21 hexes, while the British are essentially at 13 hexes. The Graf Spee can’t actually fire beyond spotting range, but that extra capacity of 4 hexes translates into extending its medium and short range values. So for example, short range is basically a quarter of a ships maximum range, so Graf Spee would be able to use powerful short range fire out to 5 hexes, whilst Ajax for would need to be within 3 hexes (a quarter of 13) to claim short range fire. The Germans will hope to do harm at long range and the British will hope to close in as fast as possible and getting to within 6 hexes will also allow torpedoes to be used.

Graff Spee slowed down to cruise speed to gain better accuracy (a +1D6) and put out a broadside at long range. She continued fire as the British approached. Poor gunnery (bad dice!) saw the British approach without too much molestation, with Achilles taking some systems damage and losing her torpedo capacity. 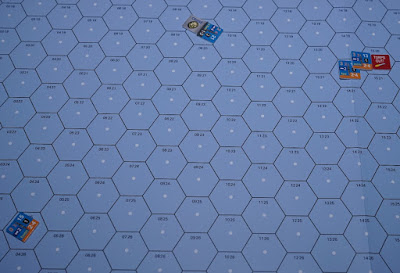 As the British closed to within their gunnery range, the Graf Spee found herself getting outmanoeuvred, facing two groups and only being able to get a broadside against one of them (broadsides give the firer a bonus of +2D6, so are sought after). Exeter had a Broadside position, while Ajax and Achilles were broadside and in torpedo range of the Graf Spee.

Graf Spee turned to deliver a broadside against Exeter, but failed to cause significant damage. All the ships dropped to cruise speed to gain better gunnery accuracy.

Concerned about enemy torpedoes, Graf Spee started to take Evasive manoeuvres. This reduces the ships speed, but reduces each enemy fire by 1D6. 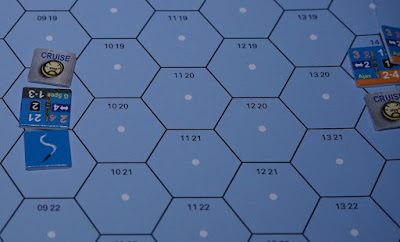 Ajax fired her torpedoes, while the other British ships delivered broadside fire. Everything fell wide of the mark, clearly the evasive tactics worked well, though all of that hard turning made it harder for Graf Spee to lay accurate fire.

The German Pocket Battleship, started to pick up speed, laying smoke in its wake, trying to conceal itself from Exeter, while moving against Ajax and Achilles. 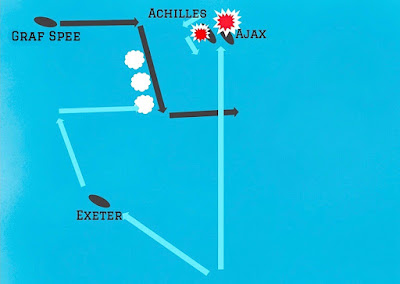 But the reply against Ajax at close range was decisive, 2 straight hits against the Ajax structural integrity of ‘1’ immediately sank her.

The gap between Graf Spee and Achilles began to open, while Exeter pursued, moving into the smoke, firing torpedoes and missing.

The gunnery between the adversaries continued. Influential factors were that Graff Spee picked up speed and so her fire was less effective. Exeter pursued, so lost her broadside position and relied on torpedoes (maximum of 2 torpedo fires per ship per game and gunnery and torpedoes cannot be used in the same turn) and Achilles though maintaining a broadside, was seeing Graf Spee slip from medium range into what is long range for her smaller 8” guns.

Turn 10 had been concluded, only Exeter and Graf Spee remained in play. The Pocket Battleship was damaged and staying in combat would have been quite risky, though she was still formidable and certainly too prickly for the faster Exeter to wish to approach alone.

With neither side achieving their victory conditions, the scenario is declared a draw, which felt about right.

In previous play, Graf Spee has been lost to torpedoes and British ships have been mauled at long range on their approach run, with the Ajax (again!) getting the status of ‘dead in the water’.

Graf Spee has the big guns and is the only ship in this scenario that has a reverse side, so can sustain heavy damage, but if Ajax and Achilles get close to Graf Spee, they can put down a lot of fire.

Overall, I like the game, it scratches an itch and is an accessible game on the subject.

While getting those important hits and hoping it will be you that gets them and not the enemy (there is a tension in the game that comes from this), ships cut and chase around the ‘sea’, turning and weaving in a way that reflects those naval battle maps common to engagement accounts and so while the mind thinks about gunnery outcomes, which of course are dice based, it is actually the manoeuvre aspect of the game that becomes the tactical imperative of the game.

Complexity - The game says two and a half out of five, I would be happy with a rating of two. The rulebook is short and the information is easy to find, so it is easy to feel your way through the first game. I just jotted down five of those one liner type of rules that are easy to forget. The same rules also run the Bismarck game and to date there is another folio pairing, so any investment in rule learning is rewarded.

Solitaire - The folio quotes three out of five. I would move that rating up to a 4. There is nothing really here that gets in the way of solo play, except they say when adjusting ship speeds, you can do this secretly by hiding the speed counter under the ship counter - I didn’t find that was really of any significance and a solo player can enjoy this game. In the Denmark Straights game, the ships start with their identity hidden by a counter until all fires have been declared .... the solo player is well practiced in sorting this sort of thing out with a die roll.

Size - a 17” x 22” map (commonly called a half mapper) keeps this easily within the ‘kitchen gaming’ type game. Counter density is low. I used the turn track marker on the map hexes to count out the turns and the charts are on the back of the rulebook. It is ziplocked so for easy storage can join other ziplocks in a box file. This would make a fun vacation game.

Time - The folio suggests 1 - 2 hours. Both the River Plate and Denmark Straights game are 10 turns long. I would put the Plate game at around an hours play, with the Bismarck scenario probably taking longer because there are a couple of more ships and some are heavily armoured, so they will probably stay in action longer, but essentially this is a short session game, with a chance of swapping sides at the end of play.