We have all no doubt been in awe of the ‘largest wargame ever!’ held in Glasgow a few weeks ago, with over 20,000 figures on huge tables and a regiment or two of keen participants to take charge of the armies. It was a fantastic and very community spirited spectacle. 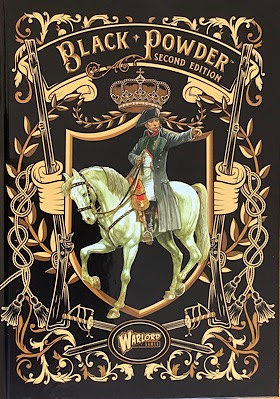 So, fellow gamers, I am ready to present to you the antithesis of such splendour .... The Smallest Black Powder wargame ever - probably! Yes I know, it doesn’t have the same ring to it, being fought out on a pinboard, one evening after dinner with some Rich Tea biscuits to dunk in my cuppa and the very obvious absence of BBC correspondents, but here we go anyway. :-)

This really is a post about a very small BP game, so if that sort of thing interests you, please use the ‘read more’ tab.


My fictional battle for Cobbs Farm, fought last week, fell out of two things. Firstly I have just acquired the Black Powder 2nd Edition Rules and have enjoyed a cover to cover read. Secondly, my back has been playing up and for a few days my movement was closed down to crab like choreography. So, what to do? A light hearted and small game at the dining table, with no stretching and quick set up, that’s what!

Resources for such an extravaganza!

A 2’ x 3’ pinboard battlefield (smaller will work),
A walled field, a farmhouse, some trees,
3 regiments of Union Infantry, plus a brigadier
2 regiments of Confederate Infantry and a battery of smoothbore foot artillery, plus a brigadier,
Black Powder rules, six D6, some casualty dice, ruler and disorder markers - oh and one of those laser pens as it turns out!


Compressing the game.
Black Powder has long associated itself with the magnificence of 12’ x 6’ tables and typically 3 - 5 brigades per side and of course more recently, with the mega game at Glasgow. However, to make this work for us today with minimum fuss, I compressed the game as follows;

We will pretend that we are just playing a small portion of a bigger game. We are out on the Union right flank, one brigade against one brigade and the fighting in this sector is over the control of Cobbs Farm. So we have already quartered the size of our game. If the bigger game were being played, then this slice of action would still need to be played out, so it sort of remains real to the big game.

The figure scale will be 12mm and the regimental frontage just 80 - 90mm, rather than the suggested 240mm used by the system, so we have reduced frontage by two thirds.

We will convert inches into centimetres, so 1” (25mm) equivalent will become 1cm (10mm), a reduction of the distance measurements down to three fifths.

We will slow down the effect of brigade destruction, by allowing a brigade to function until 50% of it’s units are destroyed (i.e. a brigade will break the moment it loses two out of its three units).

Taking these things together, I think we can say that our 3’ x 2’ pinboard is representing something like a normal 7’ x 5’ Black Powder equivalent, which is easily a comfortable space for what we are just calling a flank action.

Forces.
We will use standard Black Powder, 1863, average ACW troops for statistics and not assign any particular special attributes to any of the units. But we will use the special rule from the Glory Hallelujah supplement that states if a unit makes more than one move in its turn, it cannot also fire in that turn.

Each side has a brigade commander with a command rating of 8 and all muskets are rifled. The Union is ‘commanded’ by Player 1. I suppose we should time limit the game, so let’s say Victory will be assessed at the conclusion of 5 turns, with the winner being the player who occupies or last occupied the walled field at Cobbs Farm.

Turn 1. Shields (Union) orders his brigade to advance a short distance, so that they can deliver fire before getting involved in an assault. The men move forward in good order, but their fire is abysmally ineffective. They are fortunate that the return fire does little more than disorder the Union front line. Frustratingly for Shields, the two brigades just seem happy to skirmish, each side seemingly just testing the resolve of the other.

[notes - it is the Fire Dice of both sides that score too poorly to register hits]. 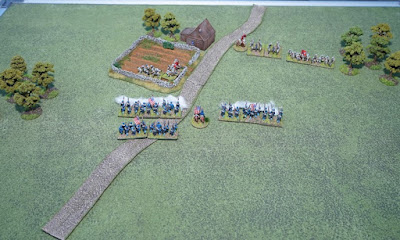 Turn 2. 8th Ohio maintain and with ‘due encouragement’ improve their fire against the walled field, but 25th Virginia are pretty much hunkered down behind that wall, taking full advantage of its cover. On the right, 67th Ohio manage to disorder Raine’s artillery, but overall, the musketry continues to be unenthusiastic. Emboldened by the Union hesitation in moving to contact, 13th Virginia on the Confederate left start a limited advance against the Union right.

Turn 3. Shields sends his aide, Colonel Tomkins, across to 67th Ohio to tell them to move and turn to counter the Confederate advance, but 67th, who have been smarting from Raine’s guns, have become drawn in to an intense firefight with the enemy artillery and the order from Tomkins could not be readily implemented, but Shields notes and appreciates the unfolding situation and is satisfied to see Raine’s Battery limber up and flee due to heavy casualties inflicted by the continuous fire of 67th. For now at least, the looming crisis on the Union right has been dampened down.

At Cobbs Field, 8th Ohio take up the chant to charge and supported to their rear by 14th Indiana, they run at a very determined 25th Virginia, taking effective fire on the way in, becoming disordered and struggling to breach the wall. As the hopelessness of the situation and the mounting number of casualties take effect, 8th Ohio break and flee, leaving their support, 14th Indiana in a front line position.

Whether or not this success on their right had any effect on the Confederate left cannot be known, but for whatever reason, 13th Virginia, who hadn’t quite managed to get into a flanking position against 67th Ohio, broke into a charge. Hitting the front of the 67th Ohio, 13th Virginia suffer serious casualties and are repulsed, falling back in some disorder.

[notes - it took the fine judgement of a laser pen to confirm that 13th Virginia could not claim a flank assault].

Turn 4. The whole Union front line, contents itself with firing at the two exhausted Confederate regiments. The exchange sees 13th Virginia on the Confederate left continue to fall back, out of small arms range and in no apparent mood to return to the fray, while 25th Virginia at the field keep up continuous fire in a desperate effort to keep the Union at arms length.

[notes - 13th Virginia fail another Break Test, due to excessive casualties from the musket fire, causing them to fall back further].

Turn 5. Shields takes advantage of the Confederate left flank falling back and orders 67th Ohio on his right to swing across and hit the Cobbs Field position in the flank, but they fail to get themselves into position. It hardly matters though as 14th Indiana put a tremendously effective volley into the field, causing the disordered and depleted 25th Virginia, who can’t take any more, to turn and break. The Confederate position has collapsed.

[notes - 67th failed their test to get two orders, which were (1) to change position and face the field, then (2) charge to contact. When fired upon, 25th Virginia were both disordered and had taken 2 excess casualties, making their Break Test much harder to pass. In any case the fact that they only rolled a four on 2D6, ensured their demise].

Conclusions
The collapse of Elzey’s position leaves the Union free to reorganise and advance to take the farm. Of course, this will need a sixth turn and so within the strict setting of the victory conditions, this should really be classed as a Confederate victory, as they were the last to occupy the field at the end of the scenario ...... but by any measure, it would be much fairer instead to call this a day in favour of the Union player, so we shall do that!

This was obviously a very basic game, but it was all about throwing down a small, accessible game into a small convenient space, that could be played out in a short session, while giving enough narrative to scratch the gaming itch and in that regard, it was very successful.

When I first played this a couple of days ago, the Confederate regiment in the field collapsed early and fell back further into the field, where they were cleared out by another charge and then the attacking infantry swept onward into the flank of Raine’s guns, so even this narrow game set up can throw up some different situations.

Anyway, hoorah for the smaller game, great for small spaces, ideal for that mid-week game, handy to keep your hand in with the rules or simply to just to admire some nice armies and roll dice.

When I first put the 12mm ACW forces together, I used the 40mm x 20mm bases that come supplied with the Kallistra figures. This made sense and the 80mm unit frontage was a nice fit inside the Kallistra 100mm (4”) hex. However, two of the Union regiments here on todays battlefield are trying out a re-basing of 30mm x 20mm, with three bases to the regiment. This 90mm frontage probably looks better in the 100mm hexes and makes a better visual representation of road movement in column. That is set against an increase of 50% in the number of bases that need to be handled each turn / game.

This is just a trial, but so far, I like the 90mm frontage. However, when I put my napoleonic forces together, doing the same thing will require 4 bases per unit when in assault column for a 2 x 2 block (but only 3 bases when in line), increasing the number of figures needed for armies by an additional third. More on this as the thinking develops.

Resources.
Another game played on the pinboard, this time with 3 brigades Vs 2 brigades. Link

COMMANDERS is my other bit of webspace, which is a bit more snippet based than here. LINK